Uncategorized
It's Friday. Everyone is excited.
What is it that makes Friday so magical? (Well for one thing there is no work for most people tomorrow, Helene, duh. If you're new to this blog sometimes I like to talk to myself in the third person.)
Anyway, as I was driving in to work today, the sun was rising, I had a big smirk on my face and I was blasting Icona Pop's “I Love It” and jamming so hard I nearly slammed into the car in front of me. But instead of them waving their middle finger at me they just laughed and smiled and drove on by.
Everyone's in a better mood on Friday.

So since everyone is happier today I thought I would write a little letter in the hopes that I get my way, isn't that what letters are for anyway?

At this point you might be sick of me talking about my favorite thing on earth: Tomorrowland.

Well, here I am again.
You see, I didn't get tickets on Saturday to my beloved electronic dance music festival in Belgium.
But I really, really think I need to be there. (Partly because I already bought non refundable plane tickets to Europe). But also for the reasons below.
_________________________
Dear Tomorrowland,
Hello! My name is Helene Sula and I had the pleasure of attending Tomorrowland 2012 last July. I was amazed and frankly, floored by the festival. It was truly one of the greatest experiences I have had in my life thus far. I would even go as far to say it was up there with my wedding day, my husband agrees.

You might not remember me out of the 180,000 people that attended. But I was the blonde girl who brought  wine in a water bottle and danced so hard she almost injured herself and others. Picture below. 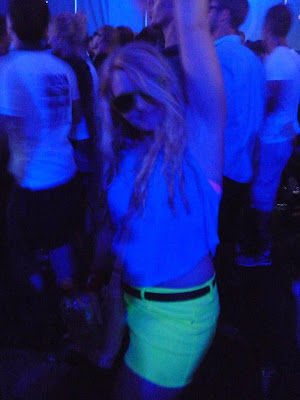 This year on February 16th I waited patiently for 2 and a half hours on the online queue and did not get tickets. Completely understandable, you have one of the most (if not THE most) popular festivals in the world. However, I think that it's imperative that I am present at your festival.
First, I run a blog- heleneinbetween.com and it's kind of a big deal. (not really but let's add some spice to this letter). I have talked about the festival numerous times and will continue to do so.

I know you are thinking of bringing the festival to America. What a better way to spread the word than through me? I am a die hard fan of the music and the festival, so it's only natural that I am there to discuss it's awesomeness.

Last year, September 30th, 2011 to be exact, my friend was in a horrible motor cycle accident, where he almost died. And it inspired us: life is short, we needed to go to the festival in 2012. Well this past September the same day on September 30th, of 2012, I fell 20 feet in a rock climbing accident. My sole motivation for my broken ankle healing, was to attend Tomorrowland 2013. You don't like crushing dreams now, do you?

And lastly, you need a great representation of America at your festival.
Oh and I might have already made custom hats for my friends and I. And I really don't want that money to go to waste, you know?

So I think you should consider personally giving me an invitation to the festival.
I promise to document the experience accurately.
And I promise not to pee on the fence or jump up on any of the stages.

Now here's where I need some help. I know this is asking a lot. But I want Tomorrowland to see this letter. So, I'm asking you to tweet them.
It could be something like:

Or really whatever.
If you do I'll love you forever.
I may also give you my first born.
If not that's fine too, just help me to devise a plan to get into this thing. How to Get to Tomorrowland 2017