“OMG but you guys, like remember, whatever happens in Vegas, stays in
Vegas!” Or gets written down by me and subsequently posted on the
blog. I felt the best way to recap my trip (and my first time seeing
Britney live) was to give you a taste of what we heard along the way.
Because people in Vegas tend to say what's on their mind. 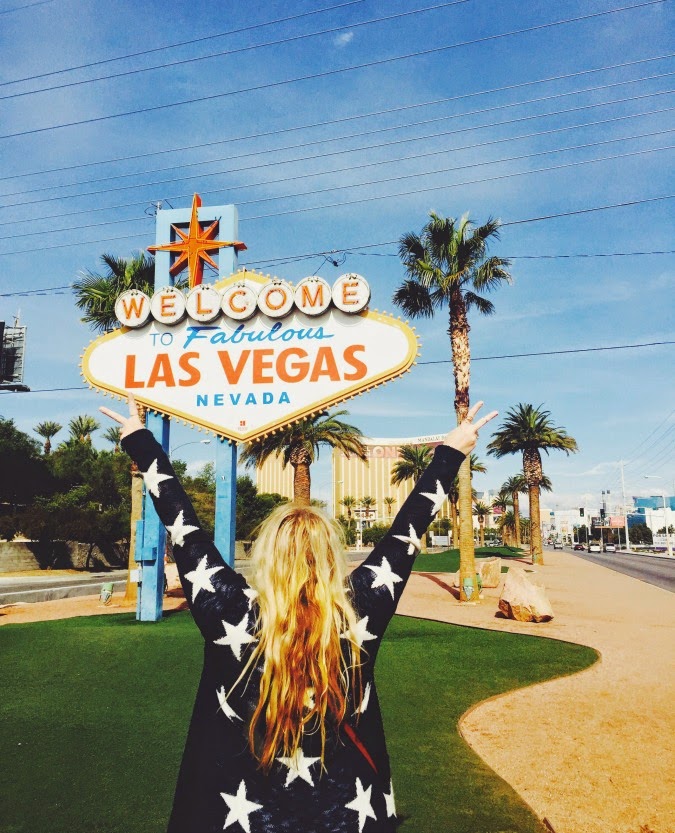 On Tuesday, my mom picked my friend Ally and I for the airport. My friend was totally prepared and we watched Mean Girls on the flight. But not just for departure, since her mom comes to Vegas regularly, she
hooked us up. A limo picked us up from the airport carrying a sign with Ally's last
name. That was enough for my moth to drop open. He chatted us up about
our plans and I casually heard myself announce that, “Britney was my second cousin.” It
just happened, I couldn't stop it.
We stayed at Planet Hollywood, a perfect location, right in the middle of the strip and across the street from the Bellagio fountains. This is also where Britney has her residency, so Britney themed elevators and memorabilia was found everywhere.
We hit the strip and opted for Fat Tuesday's frozen daquiris and a selfie stick. Which, sadly, did not work with my phone.
The next morning we put on our tennis shoes and walked. We went into almost every hotel along the way. We gambled at Paris, tried to find the lions at MGM (note, they no longer have live Lions, probably for good reasons), and had red velvet pancakes at Luxor (this one is in the shape of a pyramid.) 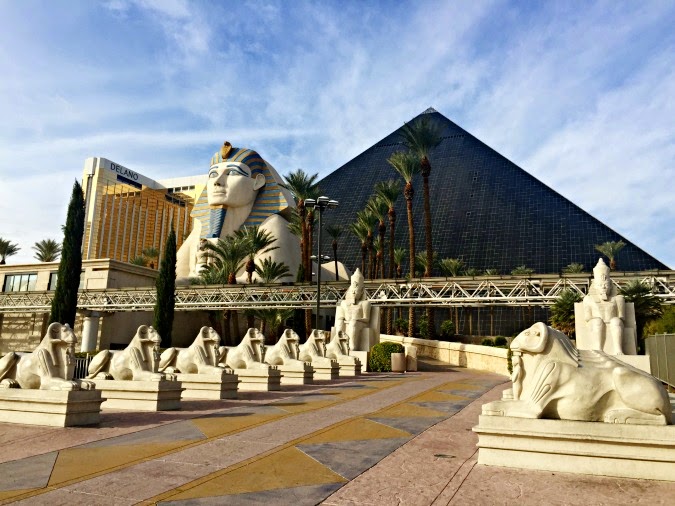 We even made our way down the the Las Vegas sign, all on foot. 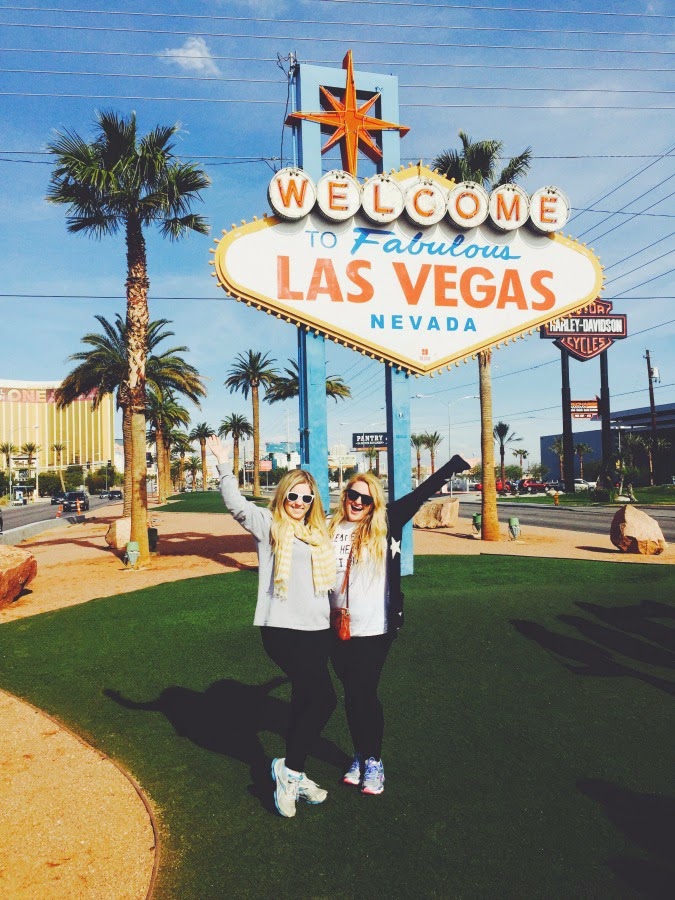 There was an Elvis impersonator there and he was talking to some women trying to get tips when he said, “I used to model, I was a hair model. Then I got fat and decided to be Elvis.” Tired from walking, we stopped in New York, New York hotel at the Shake Shack for hot dogs and frozen custard. 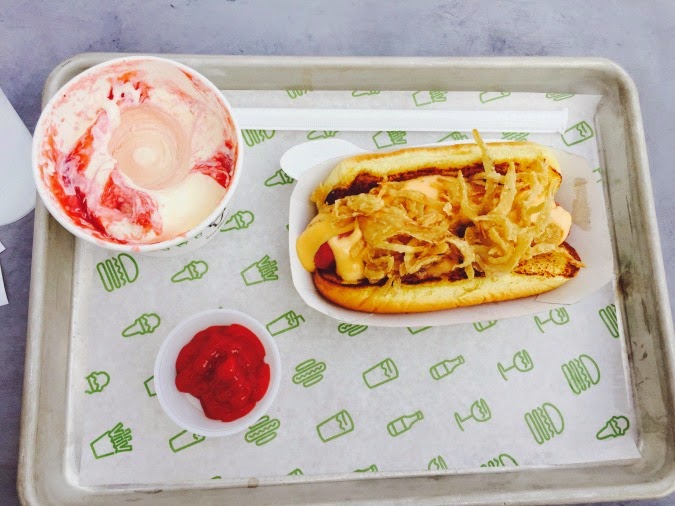 Then it was time to get ready for the main event: Britney Spears. I
could hardly contain my excitement. We got ready in our matching “It's
Vegas, B*tch” shirts I had made. We walked around a bit more hitting
25,000 steps before the concert. 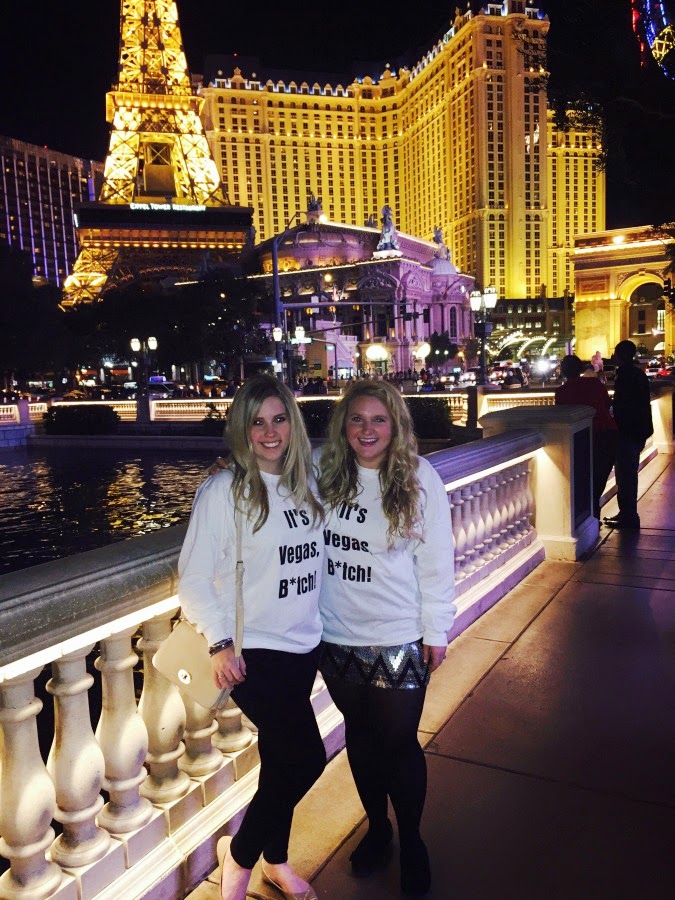 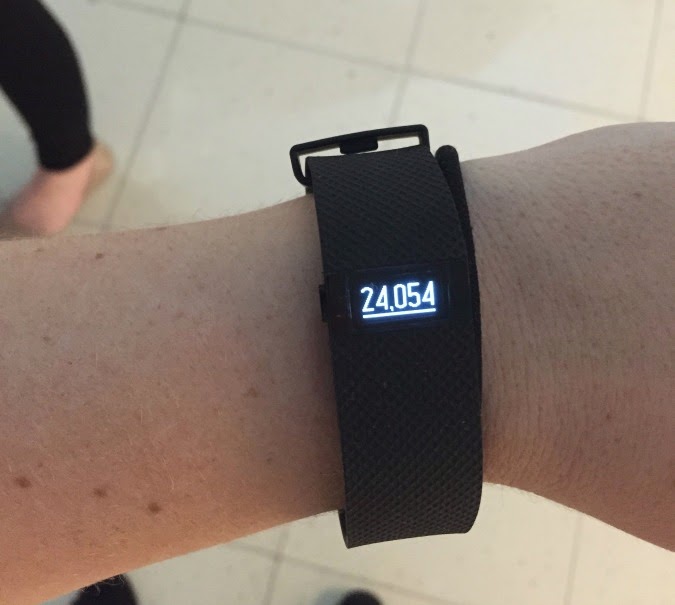 I forgot to take a picture after the concert and bar, but we went well over 35,000 steps.
We walked into the Axis in Planet Hollywood at 8:30 on the dot. There were people everywhere from all over, all ages, races, shapes, sizes, and even countries. There were some kids there, but I wouldn't recommend bringing your kid to the show.
On display was some of her costumes from music videos. I overheard a young woman say to her boyfriend, “I dressed up like this for Halloween. I'm doing it again and you can be the snake this year.” He rolled his eyes. 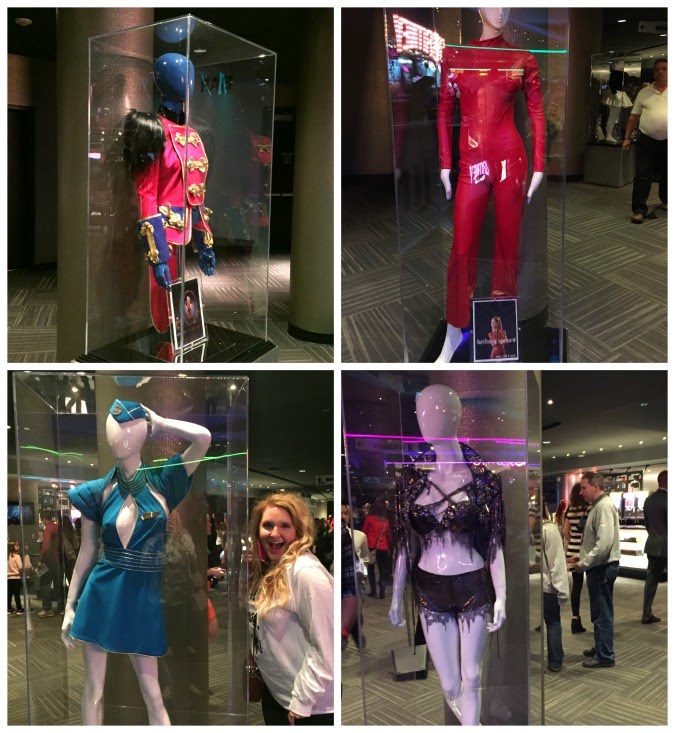 We found our seats and I meandered back to get a drink. With some liquid courage, I couldn't help it and spent entirely too much on a “Work Bitch” hat. But I had to have it. I still think it makes for a good souvenir, Michael thinks I'll never wear it again. I'm not big on wearing stuff with the word “bitch” on it, but I think I can make an exception for Britney. 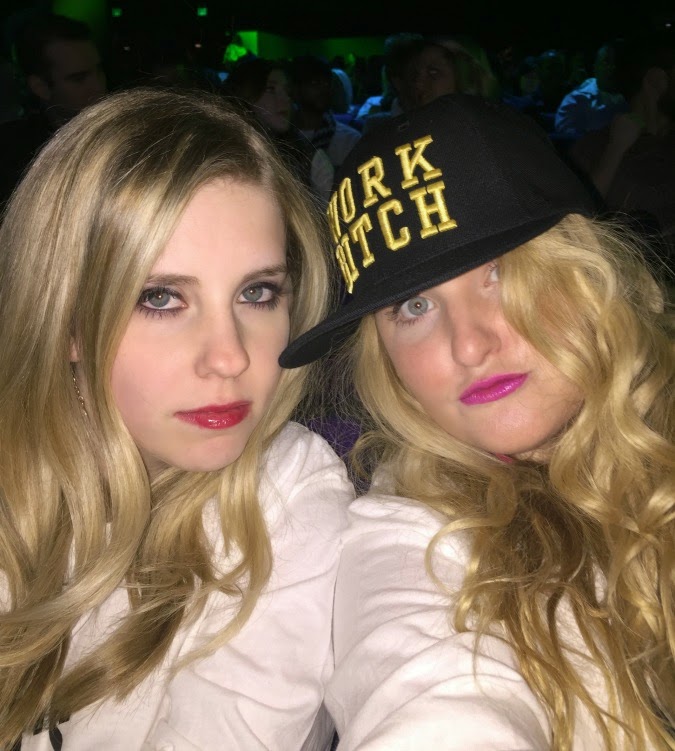 The show started right after 9 with her coming out in a steel cage, starting off with “Work Bitch”. And then moved into “Womanizer.” A girl next to me with her mom said, “Britney is fit and fabulous.” I have to agree. 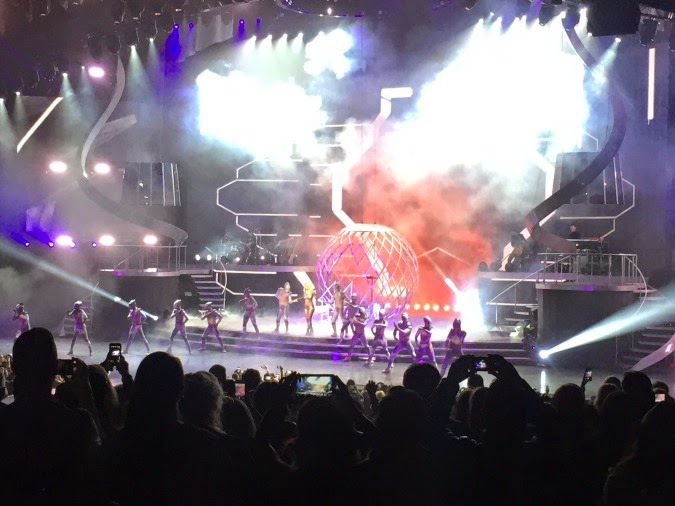 After a costume change, she came out in a larger-than-life winged costume as confetti fell through the air and the background of a cherry orchard tree was on display. It was really pretty. They lowered her to the ground as she sang “Everytime.” 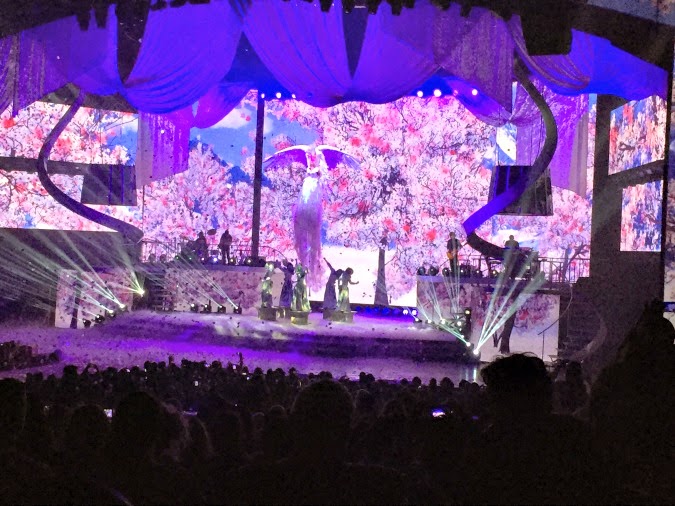 The hits continued with “Baby One More Time” and “Oops I did It Again.” I couldn't help it. I teared up. 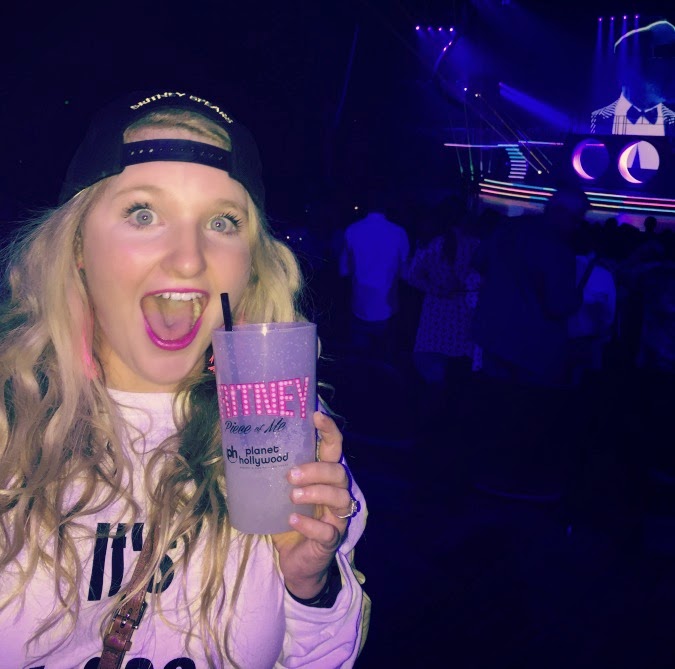 Fine. I full on cried. But this was my childhood/teenage idol, and I was finally seeing her live.
She had a quick costume change and the next set of songs were performed under black light (seems like we both like a good blacklight bash) with neon costumes. The dancers were particularly awesome during this scene. 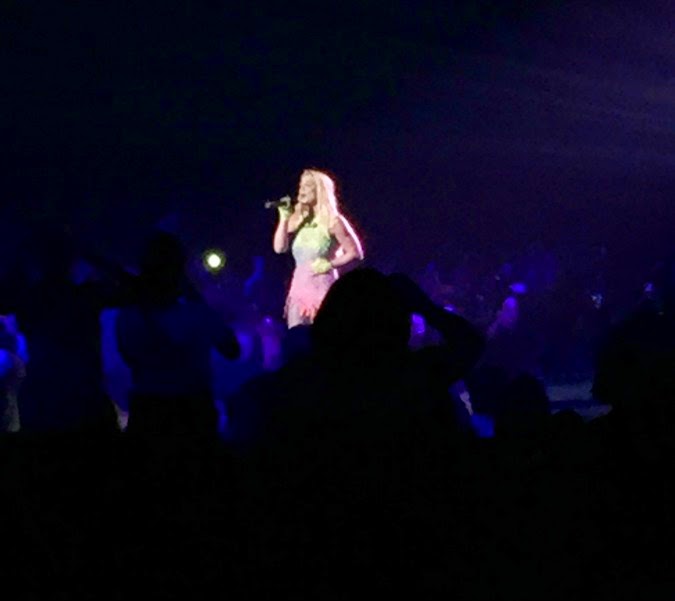 Then it turned pretty raunchy, she came out on a stripper pole and then invited a male audience member on stage to be grinded on, then walked around like a dog. Funny, but raunchy. She performed “I'm A Slave For You,” then “Freakshow.” 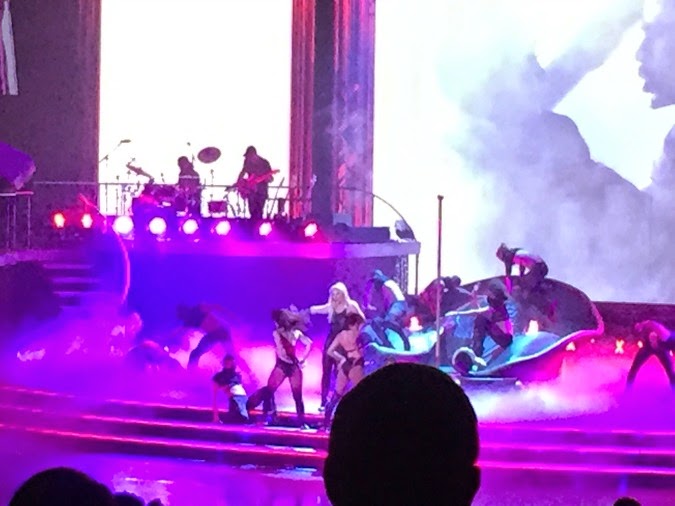 I over heard someone say, “Well DAMN” during this set.
She performed “Circus” in a ring of fire and then came out in a jungle theme, swinging from a tree for Toxic. I think that was probably my favorite performance. 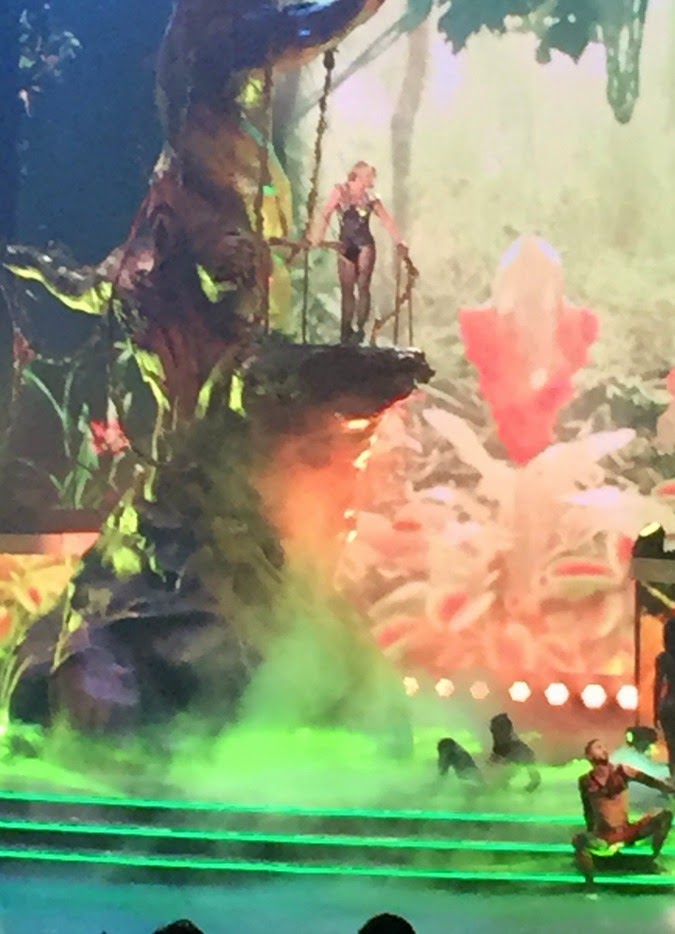 She ended the night with “Crazy” and then “Till the World Ends.” I heard a more than a few people say “Britney didn't dance full out!” And I have to agree. BUT she is a mom of 2 and performs 3 days a week- it's a lot of work. I can't imagine for dancing for an hour and a half like that.
She also did sing, some of it was lipsyncing and most was over a track, but she still sang. And she talked to the audience too. It was a wonderful show, and an experience to say the least and I highly recommend going if you're a fan of Britney. Which, who isn't?
We ended going out to the club in Planet Hollywood, Koi until 2am and it's safe to say I slept well that night.

Thursday we tackled the other side of the strip: the flamingos at The Flamingo, The Beatles display at The Mirage, the decadence in The Venetian, the pirate ship at Treasure Island, the shops at Caesar's Palace, and the chandelier bar at The Cosmopolitan. 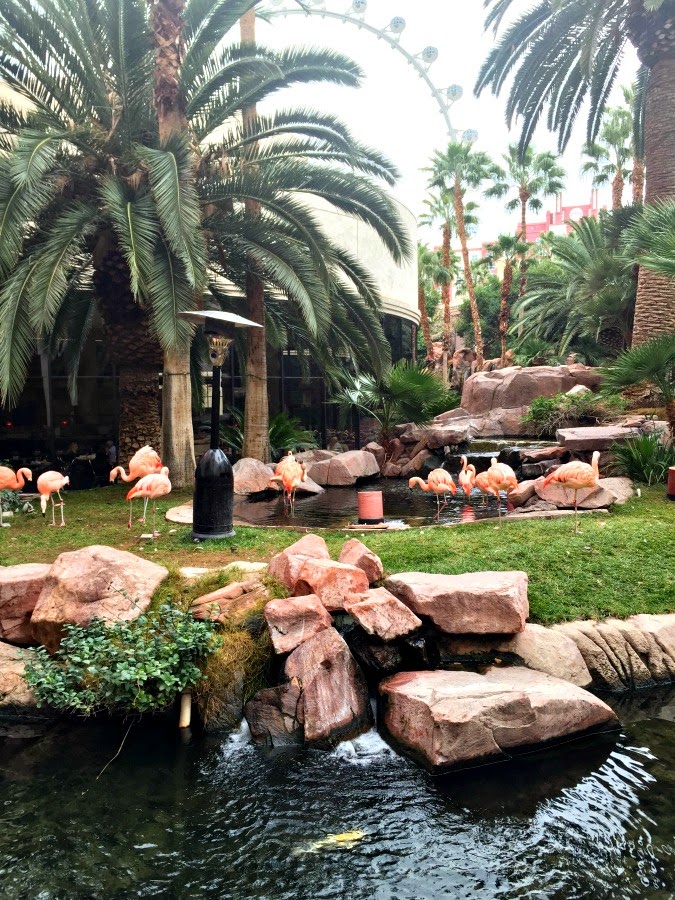 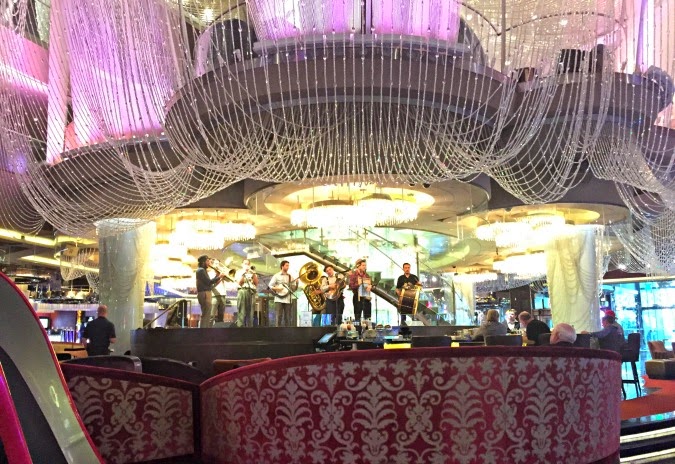 Despite walking all over the strip we made our way over to downtown Vegas for Fremont Street. There was a lot of interesting people walking around here but my favorite was when two girls dressed as playboy bunnies were forced to hold a baby for a picture. People are odd. At one point I overheard an older woman say, “I can still dress like a slut if I want.” 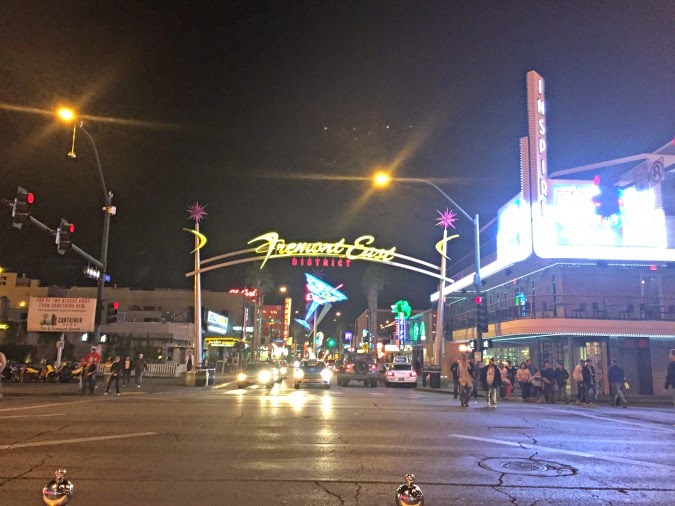 WARNING: do not under any circumstances buy the orange creamsicle daiquiris. Despite how happy I look here, just take my word for it. 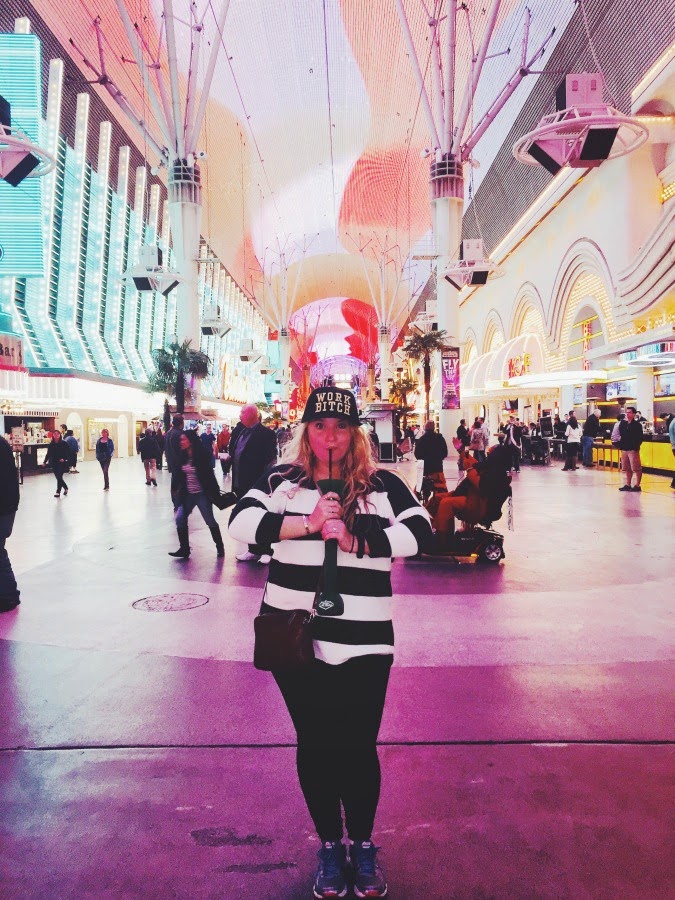 After walking around Fremont street we headed back to the hotel and got ready to go to Hakkasan at MGM to see W&W and Tiesto. To be able to see Britney and one of my favorite DJs ever (Tiesto) in one week is probably the coolest thing ever. At the very crowded pit in front of the stage I heard a guy exclaim, “This is my 4th time seeing Tiesto, I bet no one else even comes close!” To which I would have liked to answer that this was my 6th time seeing him, but I kept my mouth shut. 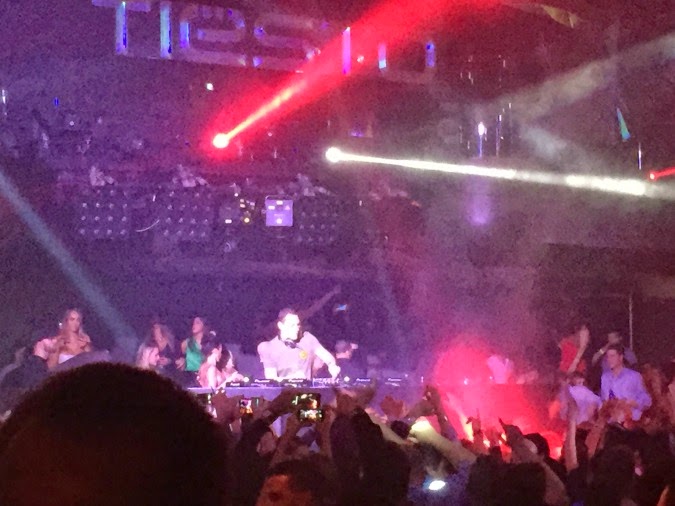 After the concert we headed back to the Cosmopolitan for Secret Pizza. It's an unmarked place on the third floor with delicious, cheap pizza. I highly recommend finding it.
Finally, around 3am, we made it back to our hotel and to bed. We woke up Friday and waved goodbye to Vegas, and to Britney. 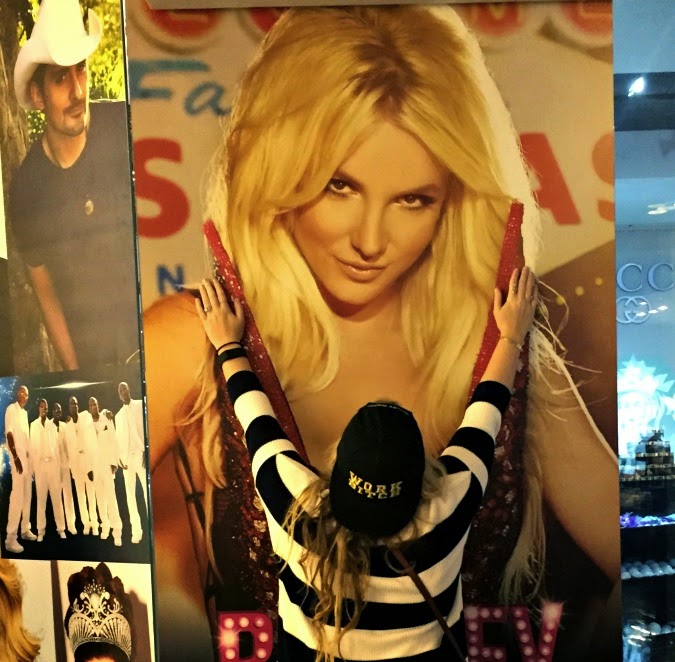 As I was boarding the plane, making my way back towards the wine I heard a guy talking to a fellow passenger, “I lost $150, my cellphone, and my dignity, but somehow, I still won.” So true. Now, I'm ready for a nap.