Friday morning I woke up and showered off a layer of my self tanner I put on the night before. It's Vegas and I needed to not look as ghostly pale as I am, so a slight hint of orange will do.

I landed in Vegas with really no expectations. Sure I've seen the movies but didn't have any idea what to expect. You know the saying that everything's bigger in Texas? Well the same could be said for Sin City. All the buildings were larger and grander than the next, and opulence was everywhere. 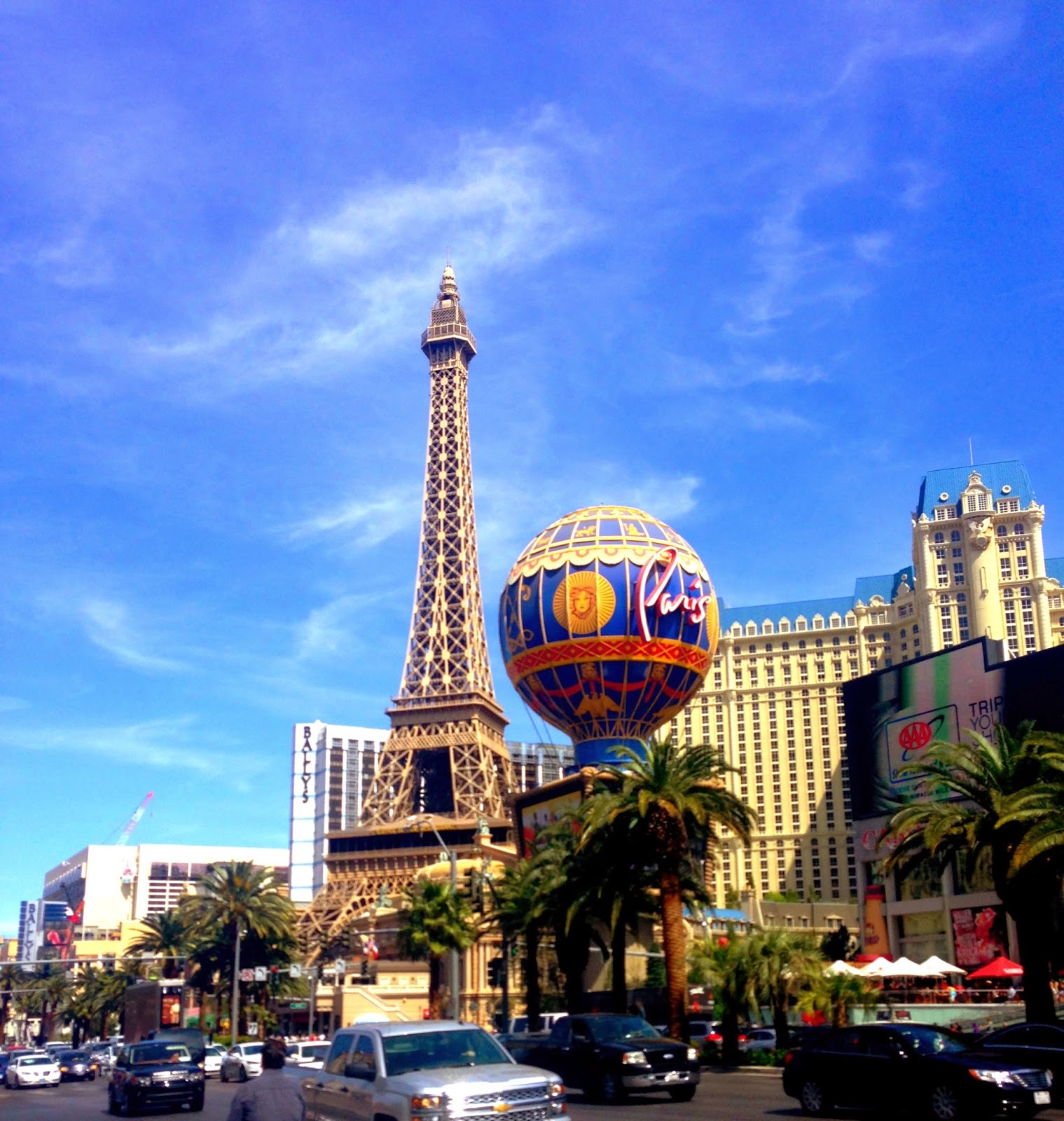 With the bachelorette in tow, we arrived at the Bellagio and marveled at the ceiling made of glass flower sculptures and the strong scent of cigarettes wafted in the air. I immediately put a dollar in the slot machine and lost it. I wondered how people enjoyed gambling.

Our first order of business was eating of course, so we strolled over to Caesar's Palace (does Caesar actually live here?) and ate at Serendipty 3. We are outdoors in what looked like a Pepto Bismal pink and orange circus tent where we ate our weight in frozen Khalua hot chocolates. From there we saw the shops and the strip and were asked “can you spare $1? I'm just trying to make it.” Me too, man, me too. 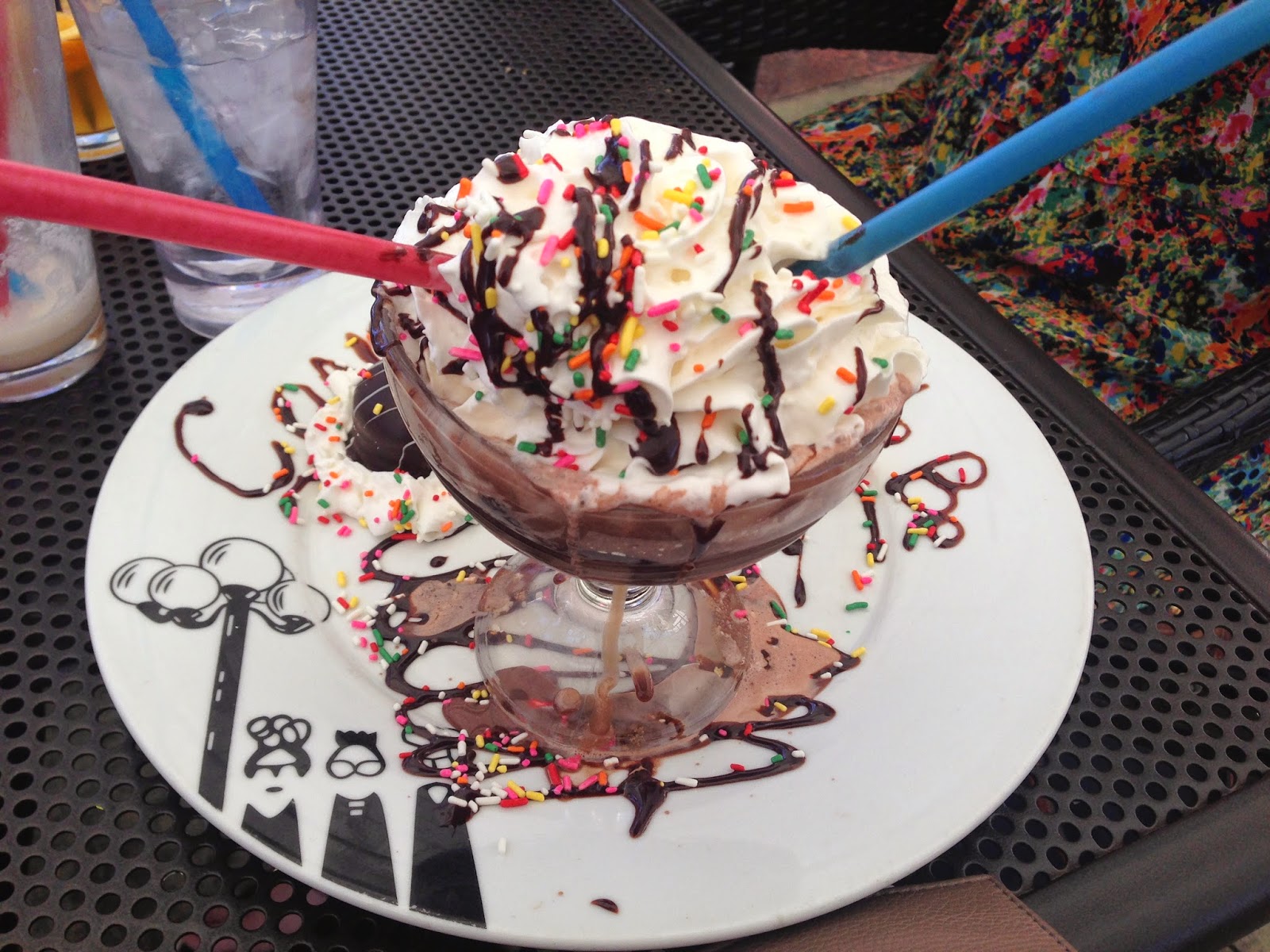 Back to our home for the weekend, we glammed up a little in the hotel room and then ate at La Cave, inside the Wynn.

Which was delicious yet overpriced. I learned that everything is and I just needed to get over it and spend some money. It's hard when you're as cheap as me. 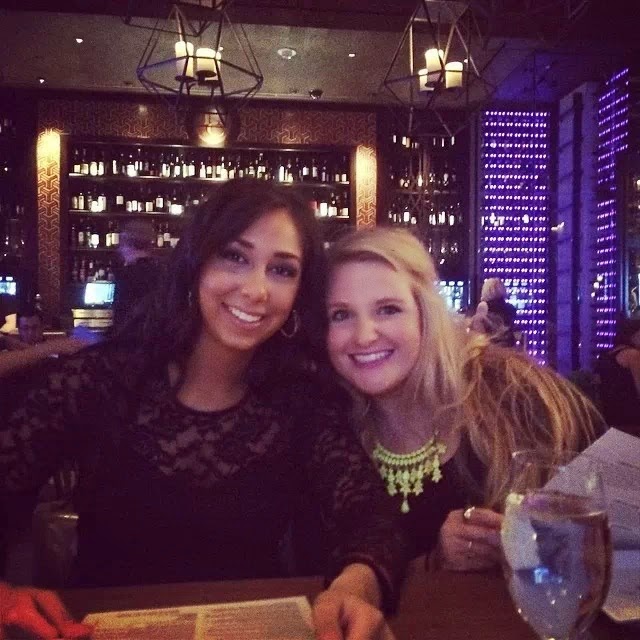 We then headed to XS, the club inside the hotel, to see David Guetta. The place was overcrowded and we were sure this was against fire code. But we managed to dance on a few tables and made it outside for a good view and slightly more space to dance. 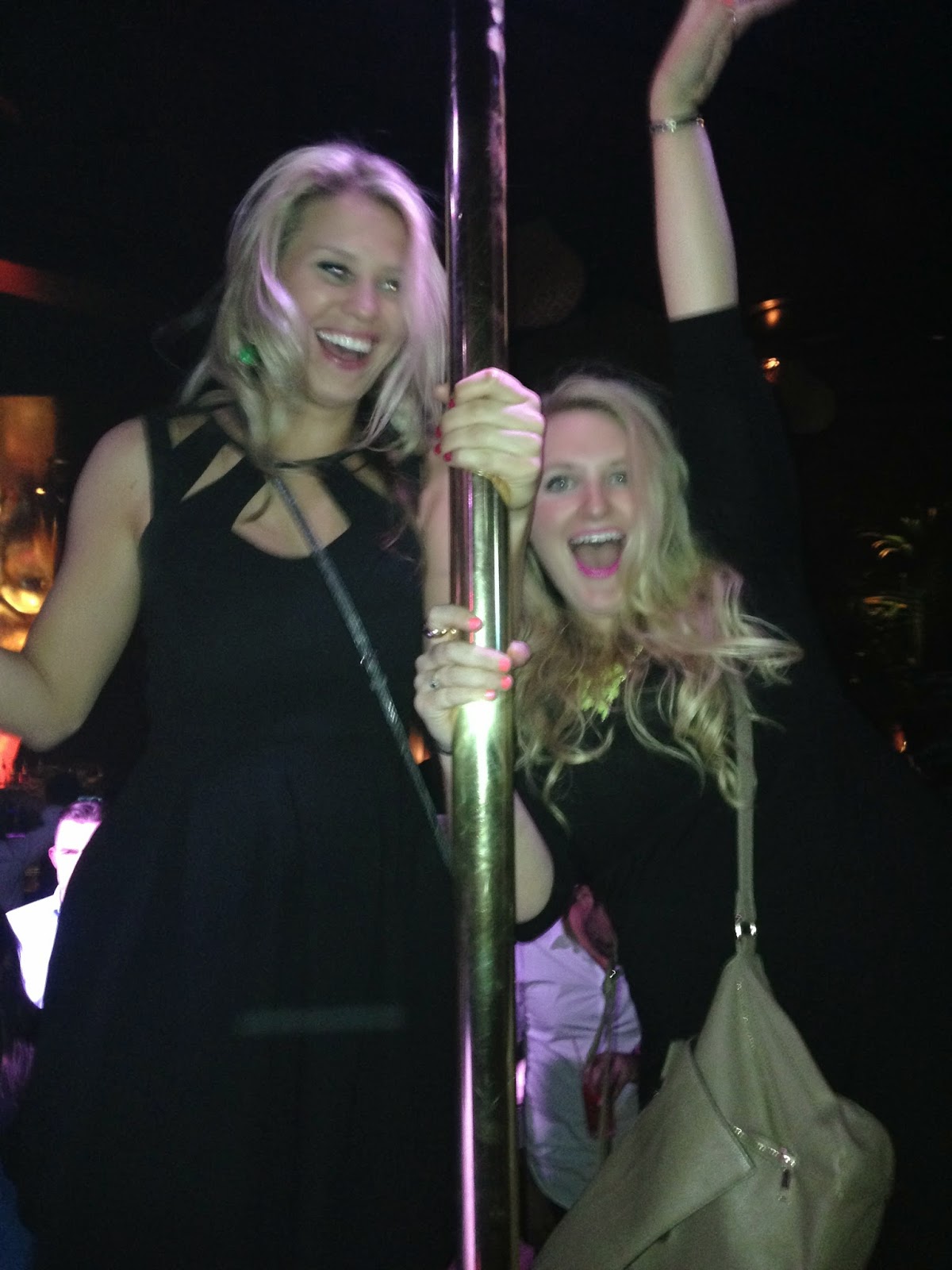 Guetta was of course wonderful but I'm already a fan. It was a great spectacle with confetti, streamers, and lights- I was in my dance music happy place. 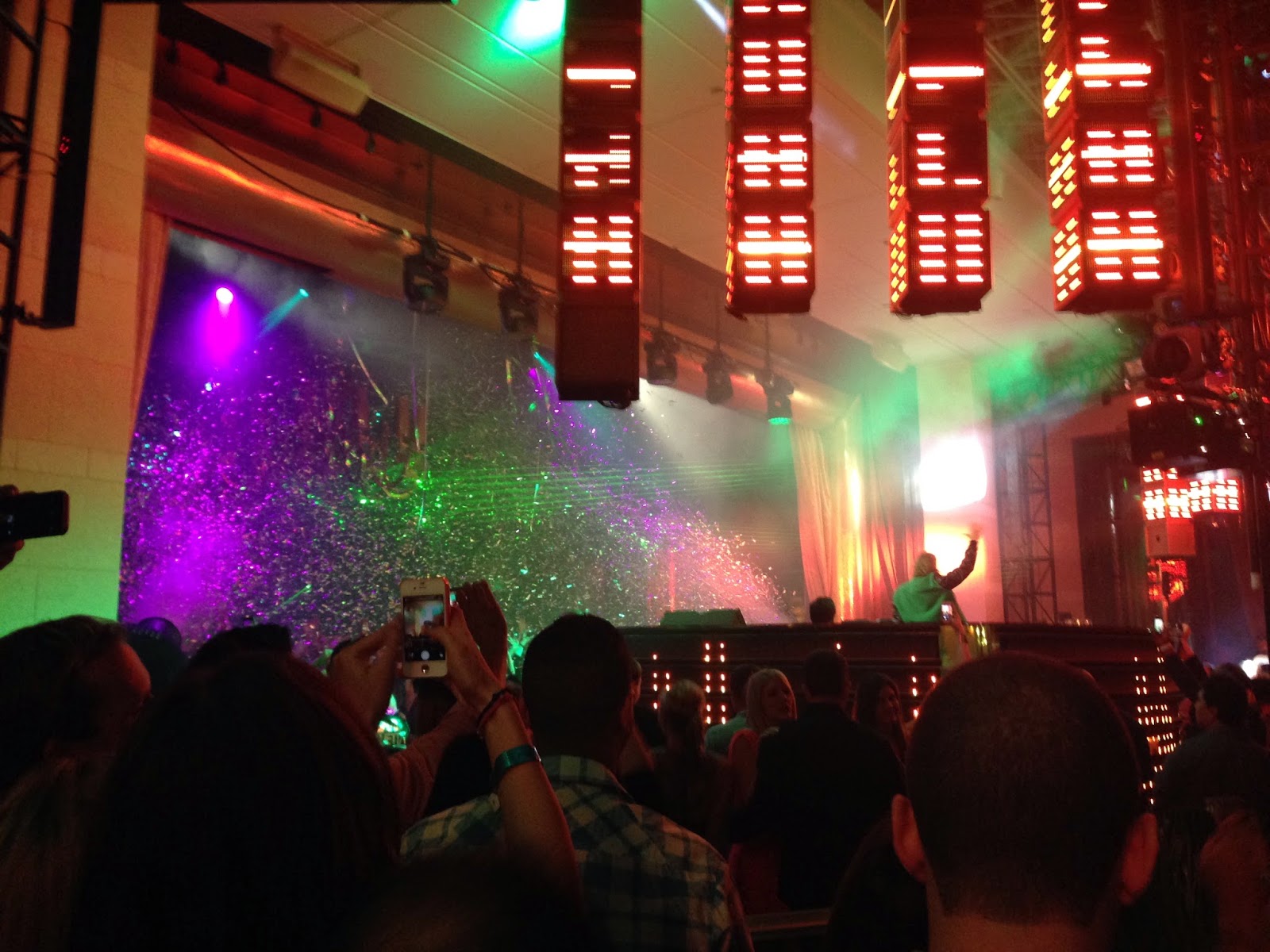 At 4 am we finally crawled back home, shoes off as we walked through the casino and vowed not to wear heels tomorrow.

The next morning we ate (and drank) at Cafe Bellagio and then hit up the pool.

It was gorgeous with plant life everywhere and piña coladas (give me a piña colada and I'm in paradise.) 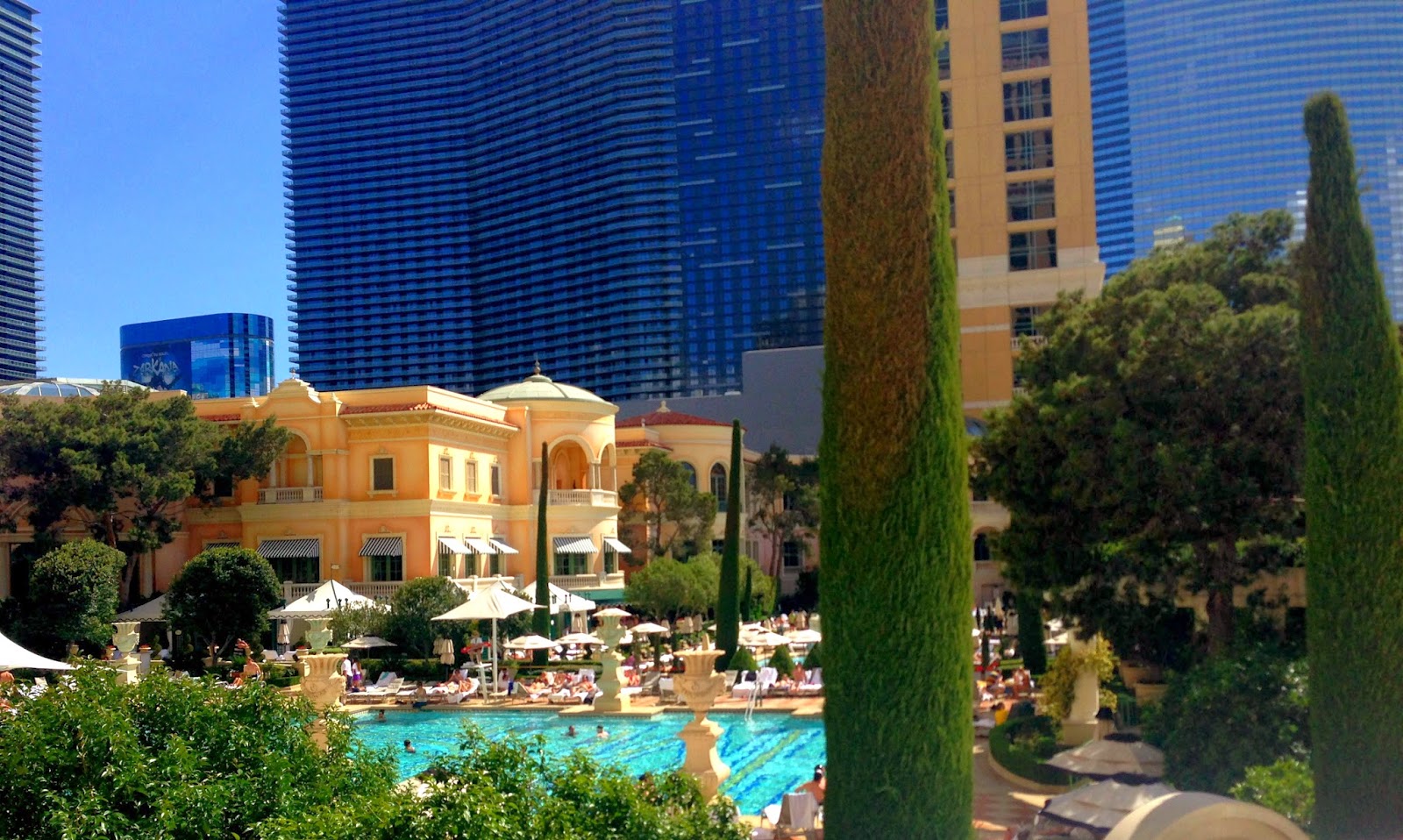 I could be perfectly fine just relaxing here all day. 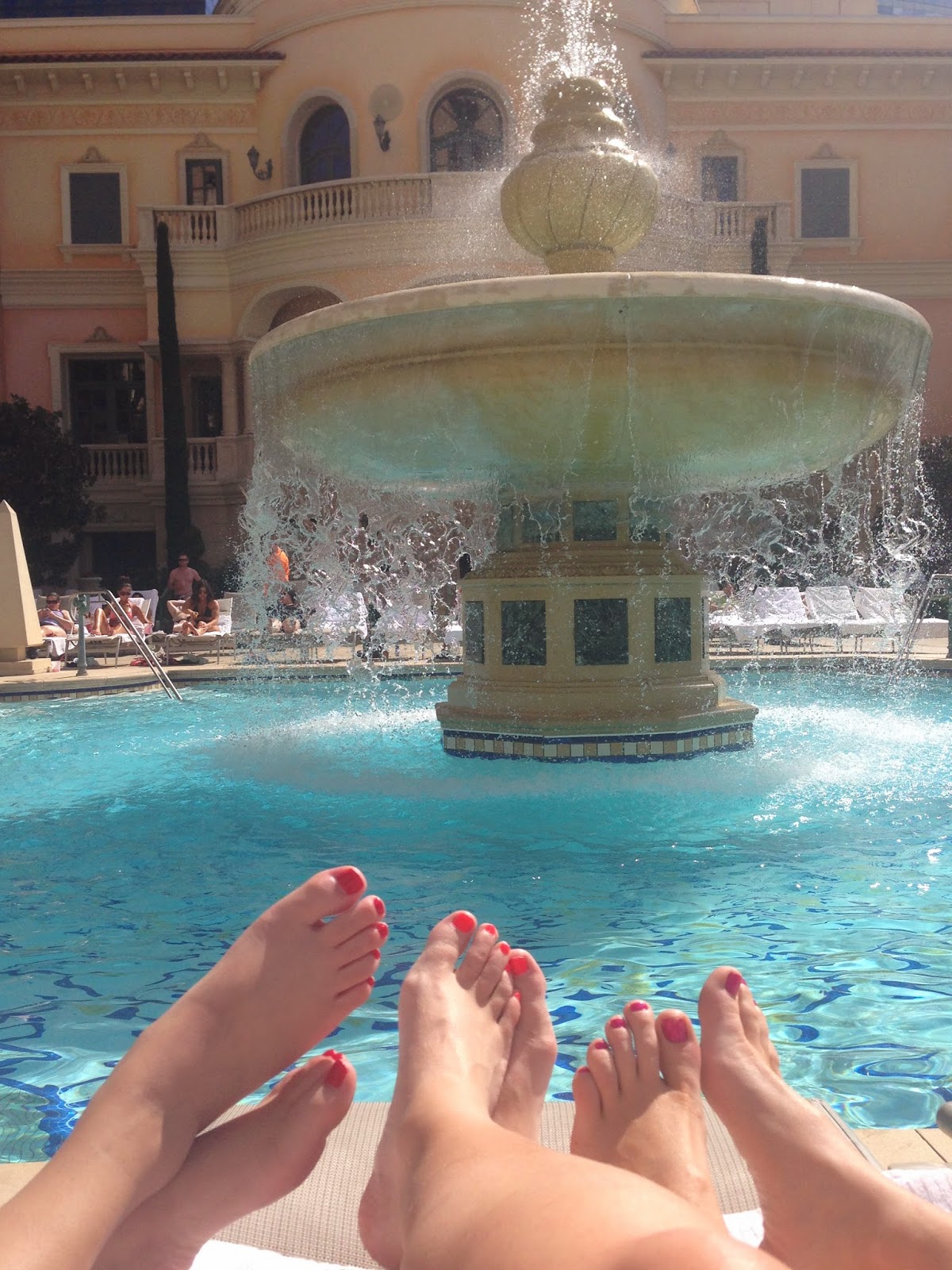 We decided to eat in and order pizza while we got ready and had a lingerie shower. They went to a show, Absinthe (which they said was hilarious and super fun circus type show.) I didn't buy tickets beforehand so when we started to walk to the venue I realized I left my phone in the room. By the time I went back to get it I decided to save my money (for some gambling) and take a walk around Vegas at night. 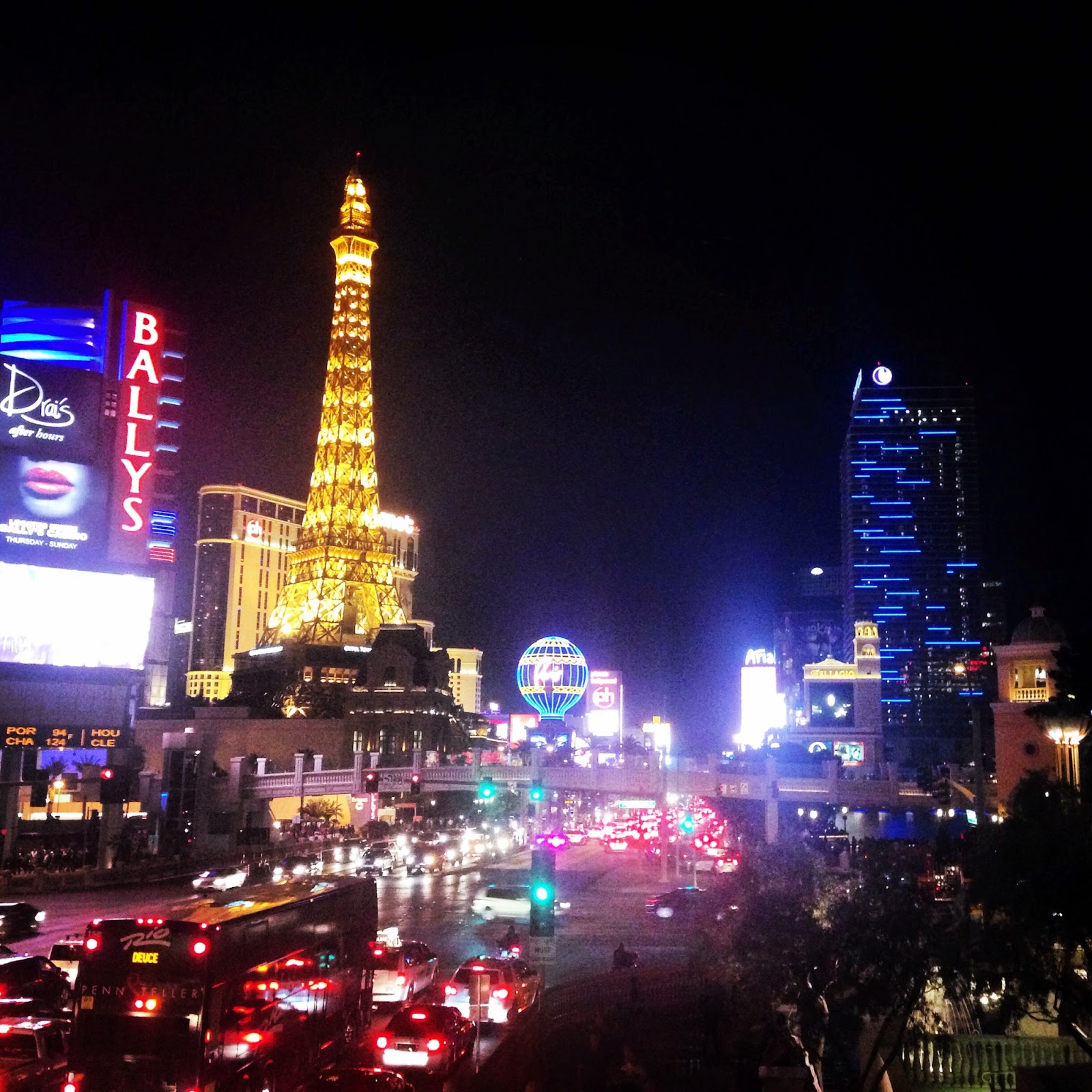 I enjoyed just walking up and down the street taking in the sights: the fake Eiffel Tower, the Bellagio water fountains set to music, all of it.
Then I headed to the slot machine to lose some money and dignity as I lost $40 in the span on 15 minutes. 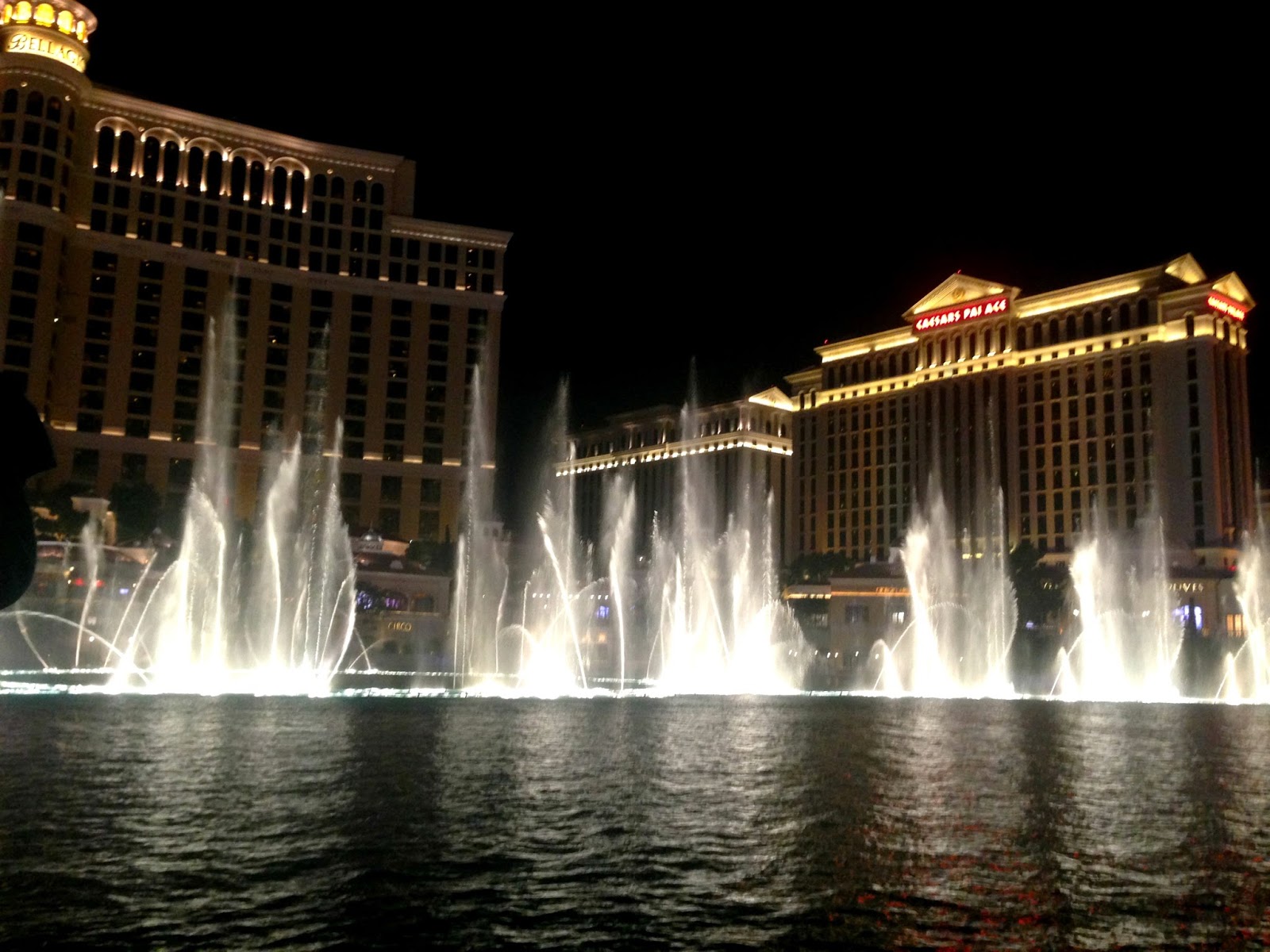 I met up with the girls and we went to the club inside the Bellagio, Hyde, mainly because Brody Jenner was there. 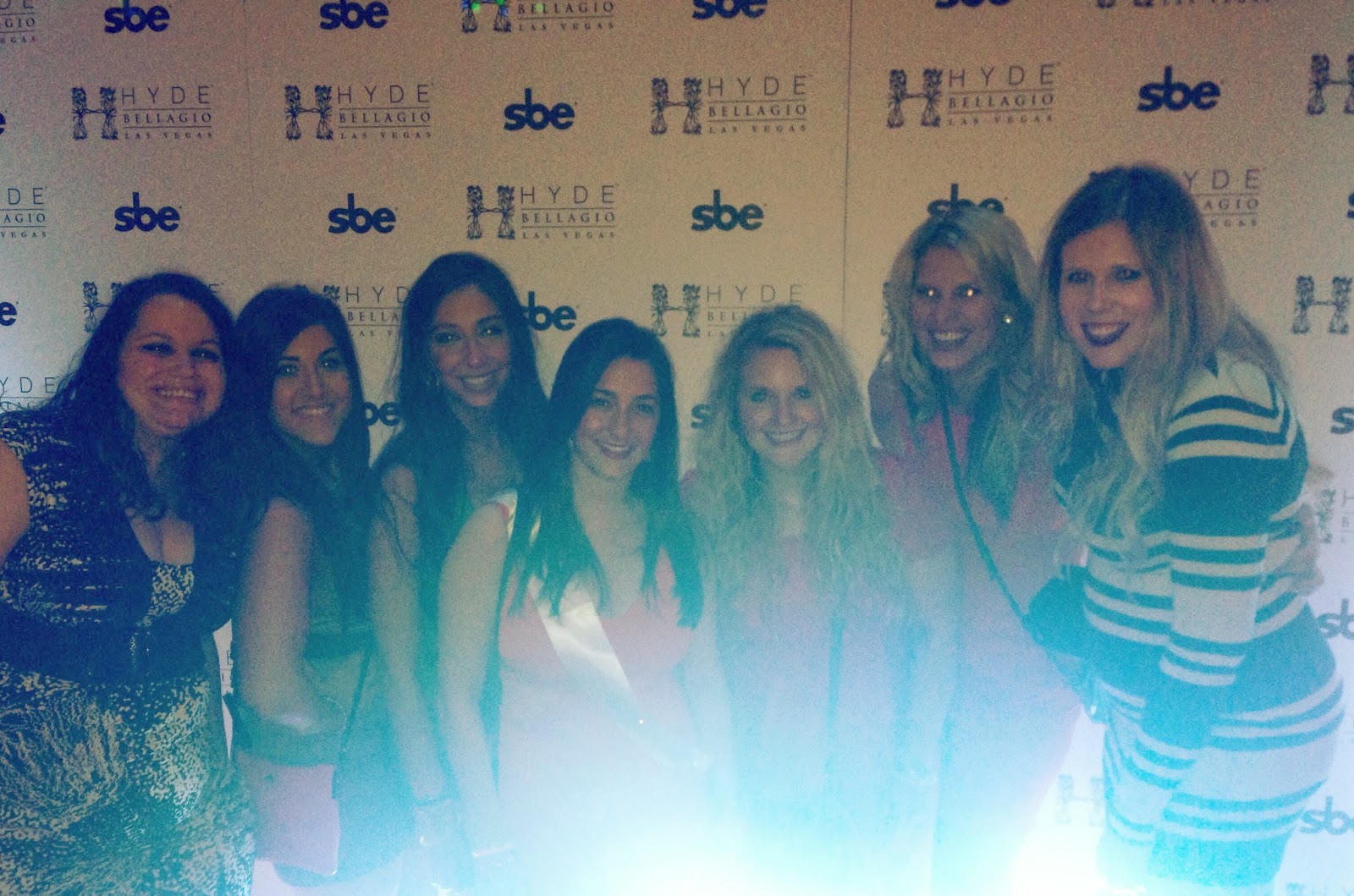 We were having a great time with our light up foam batons. When my friend threw hers into the crowd. Unfortunately, it hit a bouncer in the head. Instead of being calm he rushed at my friend like a line backer and physically kicked her out of the club! 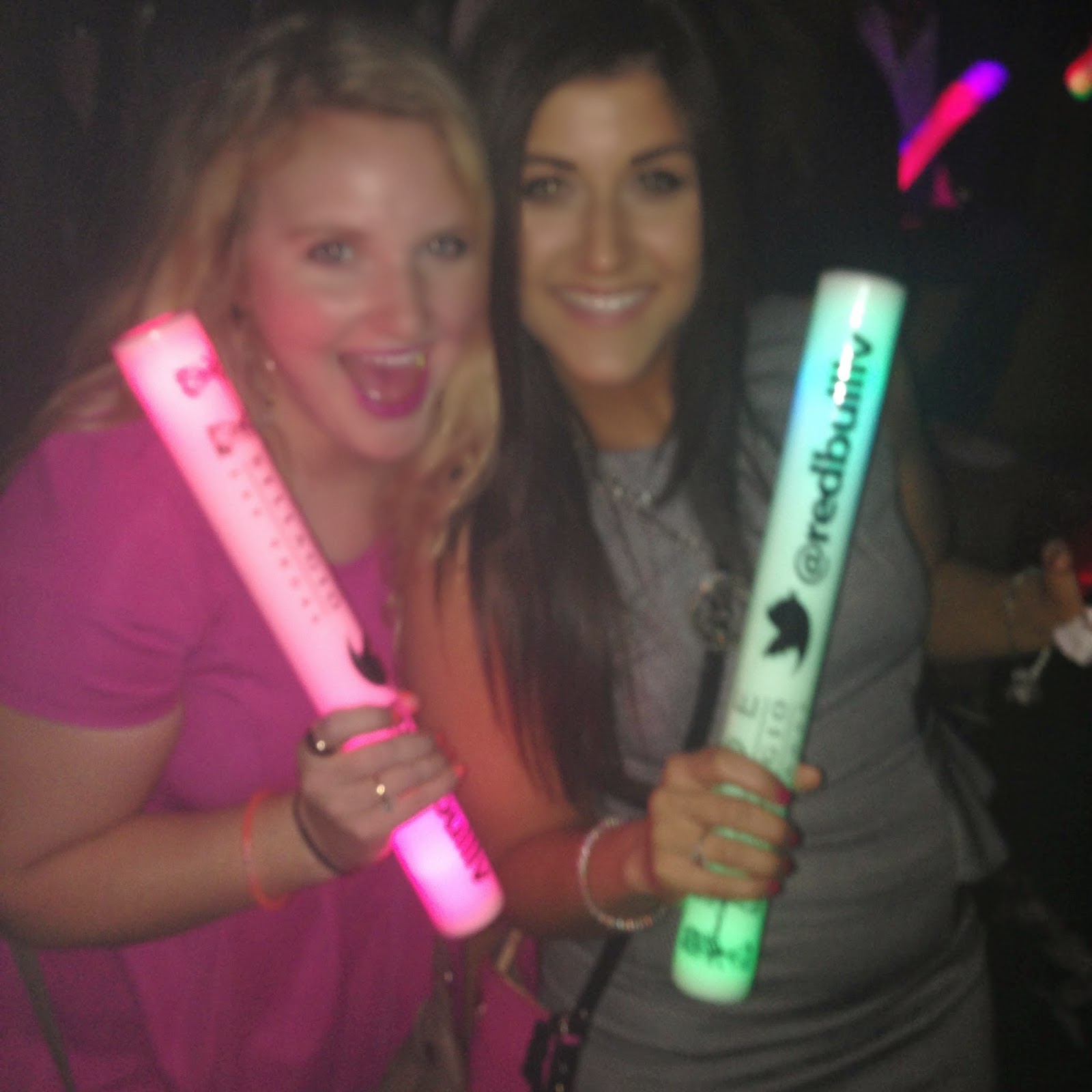 At about 2:45 the bride to he was ready to call it quits and we were missing two because of the bouncer incident, so we took her back to the room.
But a few of  us kept going. Once I get a little dance music in me, I can't stop. So, the three of us went to MGM Grand to Hakkasan to see Hardwell and continue the party. After spending some time at the VIP lounge and shocking an Australian that I was in fact, married, we called it quits. At 5 am we were finally in bed. 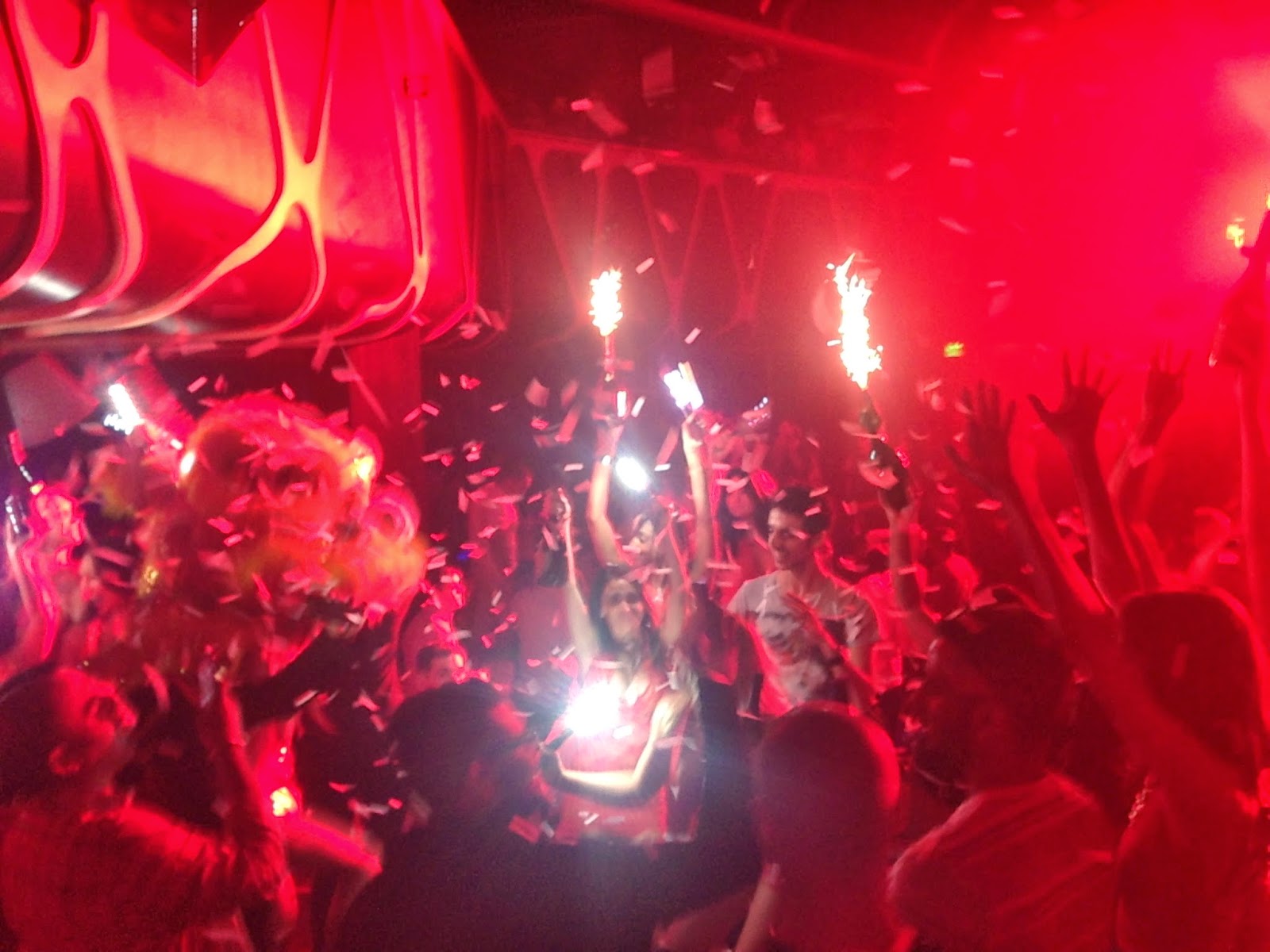 On Sunday, we woke up, put on our Bellagio shirts and I hugged them goodbye.

So now it's back to reality on very little sleep and with a lot less money but lots of fun memories.

Surviving the Week Before Christmas