7 Things I’m Definitely Not Giving Up For Lent

From 1st grade until senior year of high school, I attended a private, Catholic school. I loved it. The friends I've made there are still the ones I have today. I think I received a fairly solid education and I never did bad things to rebel against my catholic upbringing.
I'm still Catholic, but not necessarily a “good” catholic. I'm more of a C & E & W (Christmas, Easter, and I include the W for weddings) Catholic. But no matter what, I always give up something for Lent.
In the past it's been sweets or different foods, but I'm over that. It's just not going to happen. So instead of focusing on what I'm giving up, here's a list of things I'm definitely not giving up for Lent this year. 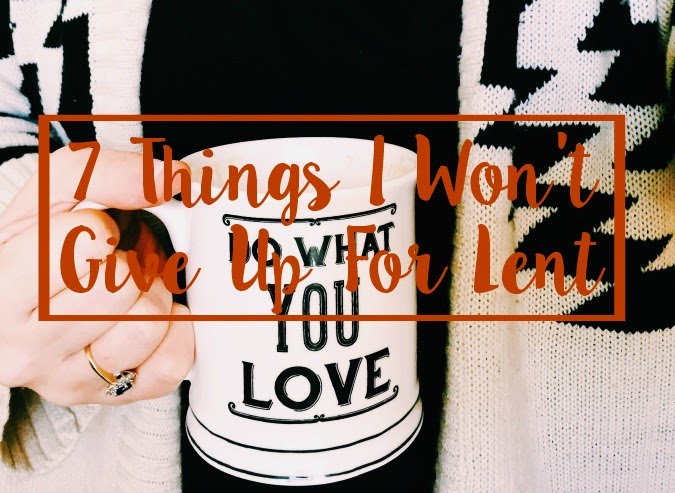 1. Any “bad” foods
I thought I was going to give up carbs. Then I laughed at myself. Hard. And ate a piece of toast for breakfast.

2. Being “mean” to Michael
He does dumb stuff and it's my job to point out when he messes up. That's what being married is about, right?

3.  Wasting time staring at Instagram
Because failure is bound to happen and I just don't need that in my life right now.

4. Alcoholic beverages
I'm about to go on a cruise. I'm pretty sure they only serve booze.

5. Reality TV
The Bachelor is just plain, good television. Plus, it's almost over and I can't miss the ending.

7. Caffeine
I would harm someone, and that would be a sin.

Are you giving anything up this year?