My favorite month of the year also means my favorite blogging month of the year. I get to write posts reviewing the year and what I'm looking forward to in the next. I would consider myself a music snob. I don't really have any business being one (I just like what I like) but I am one all the same.
Last year, I wrote a list of the worst songs of 2013 and while not everyone agreed with me, I knew I had to bring it back this year. 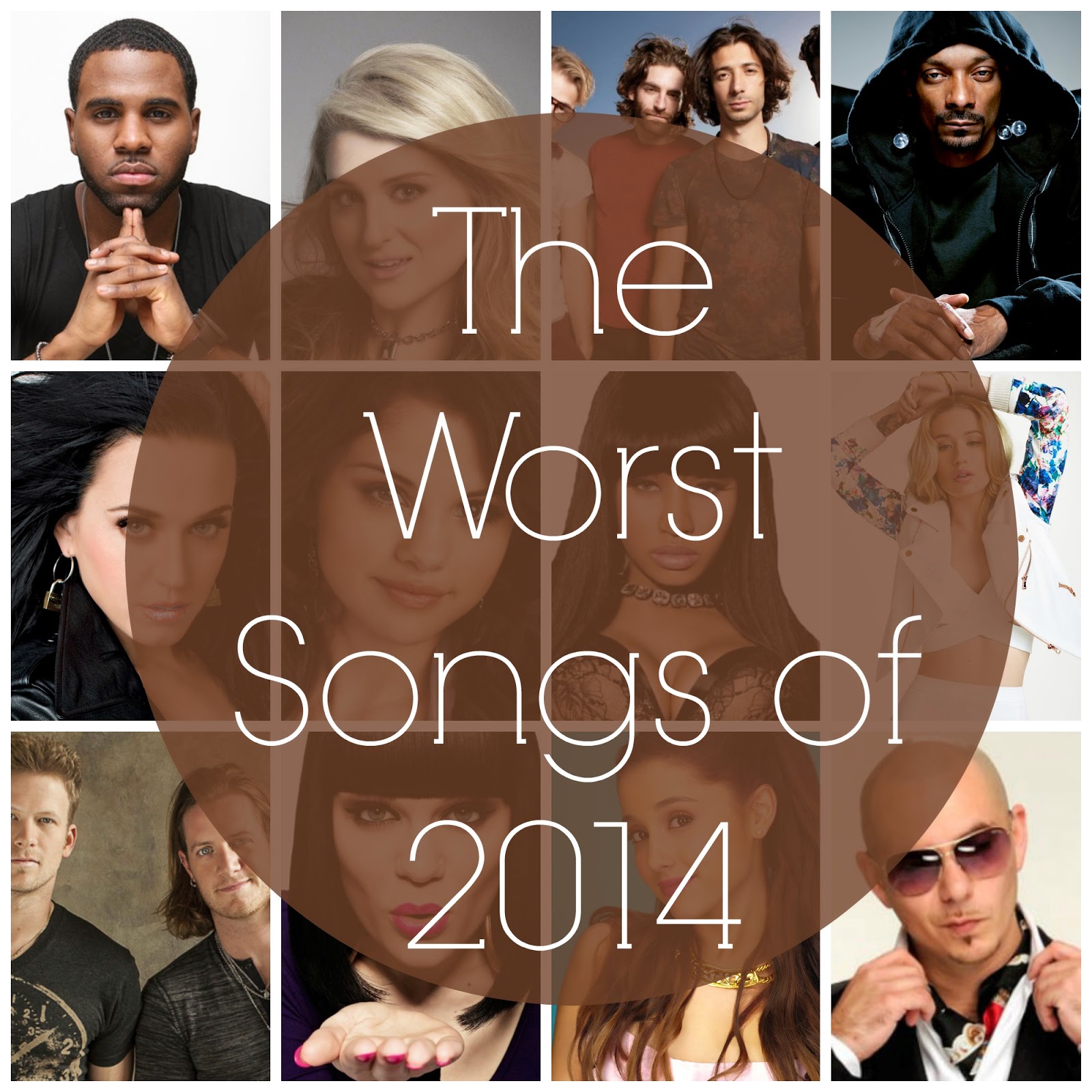 And just like last year, to make things more interesting, link up with me next Thursday (December 18th) for your FAVORITE songs of 2014! Hey, maybe the songs that you loved will be the songs I hated. Can be one or 20, whatever you want. Tell me your favorite songs of 2014, and if you want include some of the ones you thought were the worst too

Wiggle (feat. Snoop Dogg) by Jason DeRülo on Grooveshark
Okay, I admit it. I wiggled and
shimmied to this song. But that doesn't mean it isn't flat out
terrible. This song is only carried by the beat, because if you actually listen to the words you will feel sad for ever listening to it. Wost lyric: “Your booty like two planets. Go head, and go ham sandwich” Jason, let's not tell people what to do, just say you're name in the song a few more times.

This is one of those songs where I want to immediately stab my radio when it comes on. Make. It. Stop. Please stop telling us about the bass. I like Megahan Trainor, I do, but this song needs to move on.Wost Lyric: “I'm bringing booty back.” I'm pretty sure it's already here.

This song is about a guy (a stoned guy) trying to ask for a Dad for a girl's hand in marriage. All I know is that if I was this girl's Dad I would say no as well. And I would say no in the rudest way possible. Worst lyric: ” Why you gotta be so rude? I'm gonna marry her anyway” Dad: LOL, no.

Not only is this one of the worst songs of 2014, I'd venture to say this is one of the worst Katy Perry songs I've ever heard. The melody and lyrics are flat and boring. From the California girl, I'd expect a whole lot more. The song basically makes no sense. Worst lyric: “Santa Barbara, chique, at La Super Rica, grabbing tacos, checking out hotties. Now we talking astrology, getting our nails did, all Japanese-y.” Is she just saing the words that come into her head? I think yes.

Selena makes it on the list for a 2nd year in a row- congrats. I like Selena, but she might want to get back with Bieber if she's going to keep coming out with songs like this. Slow, and not in a good way. Worst lyric: “You got me sippin' on something. I can't compare to nothing.” I'm not sure that she's of legal drinking age, hence why she can't compare it to anything.

Only can Nicki expertly take an awesome classic song, oversexualize it and rub her butt all over it. We get it. You have a big butt. The number of songs about butts this year is incredible, in a degrading kind of way. But I think Nicki's butt song tops them all. Worst lyric: “This dude named Michael used to ride motorcycles. Dick bigger than a tower, I ain't talking about Eiffel's.” Rap is dead.

This song scares me a little. The concept is that Iggy and Rita love you like a black widow which means they kill you at the end. That's all fine and dandy but this song is a repetitive cluster. Worst lyric: “It's like I loved you so much and now I just hate you.”  Let's leave the Black Widow to Motley Crue, please.

Ahh, the Nicklelback of country. Every song they come out with could easily land on my list, but I'm going to stick with “Sun Daze” for this year. I am admittedly not a huge fan of country music, but I can appreciate the greats like Tim McGraw, Pat Green, and George Strait. FGL is not one of them. They are a poppy mix of country that makes me genuinely sad for America. Worst lyric: “All I Want to do today is wear my favorite shades and get stoned.” Why don't you go ahead and do that, but no need to document that huge achievement with an auto-tuned song.This whole song is the worst lyrics, ever.

The amount of times they repeat the word bang is incomprehensible. This isn't a song, they are trying to see how many times they can repeat a single word before you change the radio station. Jokes on us because somehow this song is extremely popular. I think it's because girls are obsessed with the miniature human that is Ariana Grande and want to watch how she can sing so loudly even though she's pint sized. Worst lyric: “Bang bang into the room (I know you want it). Bang bang all over you (I'll let you have it)” I want to bang my head until I can't hear this song anymore.

Pitbull is one of the worst artists on the face of the planet, yet all of his songs are number one hits. I'm embarrassed to have this Youtube video in my search history, even if it was for research purposes. Mr. WorldWide uses his special mix of yelling out a few major cities he's traveled to, throw in some words in Spanish (“Dale” of course), then make some grunting noises.  Worst lyric: “I saw, I came, I conquered. Or should I say, I saw, I conquered, I came.” Gross.

What are your thoughts? Would any of these make your list of worst songs of 2014?

Don't forget to link up, next Thursday, December 18th for your picks for Best and worst songs of 2014!