The year of 2013 is coming to a close. I'm seeing lots of lists here and there about just about everything, but one I haven't seen yet (at least in blog land) is music. Today I'm listing off the worst songs of 2013, in my opinion. Please don't get offended if your go to jam is on here. Or do. Actually, that would be entertaining. 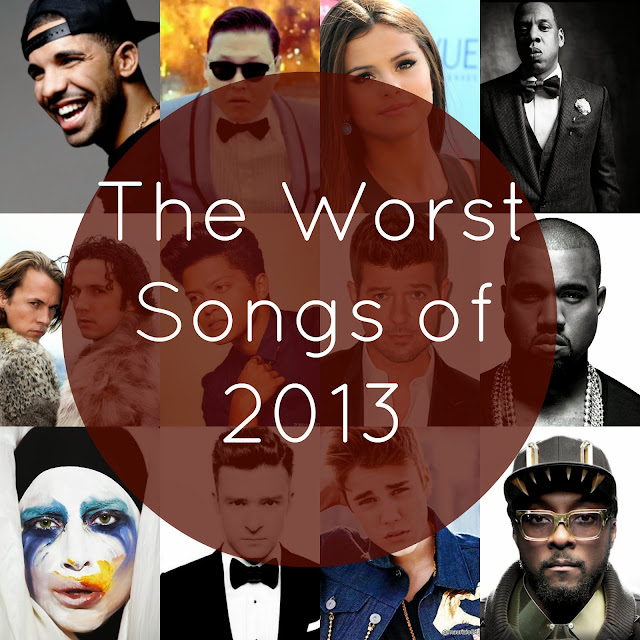 And to make this more fun, I'm announcing my FAVORITE songs of 2013 next Wednesday. And I want to hear yours! So link up with me! Can be one or 20, whatever you want. Tell me your favorite songs of 2013! And if you want include some of the ones you thought were the worst too!
Thanks to Sarah for sending me this perfect pink record player!

Grab a button and link up next Wednesday, December 18th!

Why would I want to do it like a gorilla? Also Bruno is shorter than me and I'm 5'2″, it just wouldn't work out. I will listen to dirty songs but this one is just a little too much. Worst lyric: “You'll be banging on my chest, bang bang, gorilla.” We get it. Y'all are gorillas.

I don't go gaga for Gaga. She's just tries too be hard to be weird to me. But I can admit that some of her songs are great to dance to and catchy. “Applause” is just the opposite. Worst lyric: “Put your hands up make them touch.” Really?! Why do we always have to talk about hands, I don't get it.

I know you all probably disagree with me on this one but I I'm not a fan. I love Jay Z and JT, but this song was weak. Stealing lyrics from a Nirvana song? You can do better. Worst lyric: “This light work, cameras snapping, my eyes hurt.” Sorry about your eyes.

7. Drake “Started From The Bottom”

This song might be the contender for most repetitive song of the year. Drake, you can do better than rapping about being on the bottom and now here. Where the hell is here?! Outerspace?! Lil' Wayne's house?! Degrassi TV set? WHERE?
Worst Lyric: “Started from the bottom now we here.” Repeat 15673 times.

I will admit, this song is pretty catchy. Too catchy. It gets stuck in my head for days. But honestly: you can taste the autotune in this song. Worst lyric: “And baby once I get it, I'm yours no take backs.” 7th grade forever.

This isn't really even a song, yet it made it to Billboard's list as one of the most popular songs of 2013. The fox is obnoxious and that's how this song sounds. Worst lyric: “WHAT DOES THE FOX SAY? Ring-ding-ding-ding-dingeringeding!” I don't want to know what the fox says.

First, the title. Can we go ahead and not hashtag songs? Great. Also, I've lost all respect for JBiebs after his shenanigans this past year. But aside from that, this song just screams “douche”. Worst Lyric: “Used to have a piggy bank. But now I got a bigger bank.” I'm embarrassed for you with this lyric.

Gangam style- It made kids embarrassed everywhere as their parents whipped out their dance moves in public places. This is a one hit wonder for sure. And while I can appreciate the music video, Psy's 15 minutes of fame need to be tucked into bed and laid to rest. Worst Lyric: “You know who I am, west side” What does that even mean?

If I never hear this song again, it's too soon. Oh I loved this song when it came out. Then the realization came this was a direct rip off Marvin Gaye. They've played it so much it's landed on my worst list. I'm just so over it. Worst lyric: “I Know you want it.” No more, we don't want it anymore.

If you haven't heard of this song yet because of the infamous video, you must watch it. Basically it's like a weird 80's video, but even worse is Kanye's rapping. It's just weird. Weird can be good, but this is not the good kind. Worst lyric: “hey, you remember where we first met? Okay, I don't remember where we first met. But hey, admitting is the first step. And hey, you know ain't nobody perfect” And neither is this song.

What are your thoughts? Would any of these make your list of worst songs of 2013?

Don't forget to link up, next Wednesday, December 18th for your picks for Best and worst songs of 2013!