My favorite month of the year is December. It also means it's my favorite blogging month of the year. I love LOVE year in review stuff. I eat it up. Every year I post about the worst (and best, for that matter) songs of the year (here's the worst list for 2014 and 2013). I know what you're thinking: But, Helene, there were no bad songs this year. Oh, yes, yes there were. 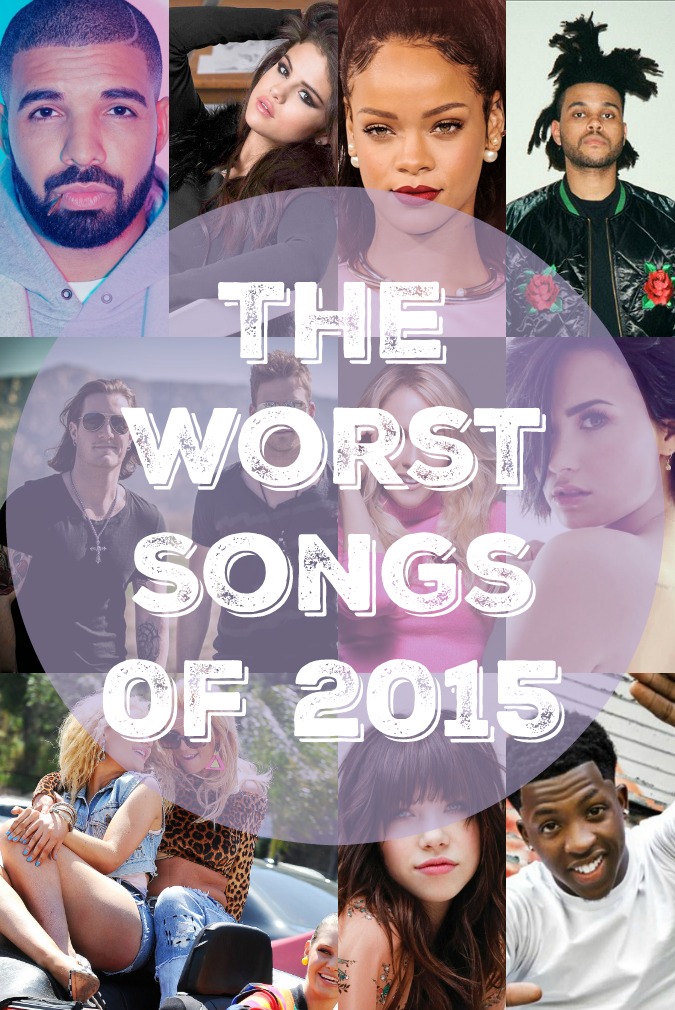 My qualifications? Must be a well known song. I know there are probably some pretty terrible ones that should make the list, but it must be in wide circulation.

For such good looking girls, this songs makes my skin itch. Synthesized voices over a flat beat and barely there lyrics repeated over and over. If you know me, you know I love Britney Spears, but this song sounds like she's in a tin can in a port-a-potty. Don't even get me started on the music video.

9. Rihanna – “Bitch Better Have My Money“

Dear Rihanna,
Why are you always yelling at me? I'm not really sure what I did and I really don't think I borrowed any money from you this year. I can double check. I really didn't think you could make a worse song than “Birthday Cake.” Thanks for proving me wrong.

I like Demi, I do. But this song hurts my ears. From the beginning to end you want to immediately hit skip on Spotify.The song just falls flat, kind of like your voice throughout. I'd rather stay warm for the summer.

I'd like Carly Rae to go ahead and take her “Call Me Maybe” self and just call it a one-hit wonder day. This song sounds like a 13 year old wrote and produced it. However, I do have to give props to Tom Hanks for the video. Nailed it. Just watch it on mute.

Here's how writing this song went down:
“Hey Frank.”
“Yeah, Eddie?”
“Let's give the kids a song about the weekend. Any idea for song lyrics?”
“Kids love saying OMG and putting thier hands up.”
“How about: Omg it's the weekend. Put your hands up for the weekend.“
“Great. Let's repeat that 450 times.”
And there you have it.

One song is named “The Weekend” one artist is named The Weeknd, I know. It's confusing. Just know that both sucked this year. Abel Tesfake, aka The Weeknd, pushes his drug culture in every song. You can't feel your face? That sounds HORRIBLE. Awful. Pair that with some lame tempo beat and you get the 5th worst song of the year.

Selena makes my list again this
year with “Same Old Love.” I'm so sick of this same old stuff, Selena.
You can do better. Or maybe, you can't? Runner up, Selena's “Good For You.” Where are my women power anthems?!

How songs like this (aka Silento's “Watch Me” which almost made my list) become popular, I'll never quite understand.

Florida Georgia Line is the Nickelback of country music in my eyes. Ridiculous songs about drinking, trucks, women, and dirt roads. Yet, they're uber popular. HOW?! This song makes me sad that this is what country music focuses on. Bring me some Pat Green, Robert Earl King, George Strait, and Garth Brooks.

This viral hit sucks. Listen
to it. Really listen to it. This song is terrible. Despite the fact the
video is the best thing that ever happened to Drake, this song is
grating on your ear drums. And why does he have a hotline anyway? Drake's voice is so nasal-y in this song, he might actually be signing through his nose cavity.

So there you have it. Stay tuned for the best songs of 2015! What's on your worst song list?