Before I start with the everything that's more important, today is the last day to answer my seriously quick Blogger questionnaire! There have been 300 people fill it out so far! The more people that fill it out the more we know what people prefer about blogging!

I was wrong. I can admit when I was wrong. Last week I speculated that Kanye West would NEVER propose to Kim Kardashian and then he goes and does it. Fine. 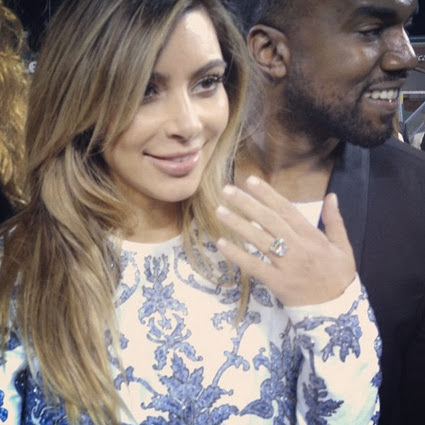 The real question is: is it big enough? The engagement ring, not her butt. Apparently yes, since it's Kanye bought it for 8 million dollars (did your pinky just go up as you read this a la Austin Powers?). That's a blood diamond if I've ever heard of one.
The video of the proposal  was actually really really adorable. And over the top – but what did you expect?

But I bet I can find 10 Things that are More Important than Kanye West and Kim Kardashian's Engagement.

1. In secret love child news, Pauly D from the Jersey Shore apparently has one. And the baby mama is a a woman who's not famous so she's labeled “mysterious.” What's more mysterious is that Pauly D had sexual relations with anyone at all.

2. I'm not into this show, but I know a LOT of you are. But recently on Pretty Little Liars a shocking twist was revealed. They actually aren't in highschool? They are mysteriously looking off into the distance at food because they're hungry? I won't spoil it, but all has to do with Alison.

3. Ben & Jerry's came out with a new flavor of Ice cream and it's channeling Ron Burgundy of Anchor Man. “Scotchy Scotch Scotch“, is the new flavor. Sound like milk was a good choice after all. P.S. Anchorman comes out December 2nd. It's kind of a big deal.

4. P. Diddy, Puff Daddy, Sean Combs- whatever his name is, just launched Revolt TV, his new cable network, which will focus on all things music. And even if you don't get the channel you can stream it live. So generous.

5. The Royal baby was baptized yesterday at St James Palace.

He was seen peeing in his dress, he ain't no slave to fashion. JK, this is speculation, but I'm pretty sure it's accurate.

6. Personally, I think it's more important for me to figure out what to be for the Halloween party on Friday. And a new outfit for my high school Alumni Homecoming on Saturday. Oh yeah, I don't miss Homecoming. Foreigner is playing this year. Maybe I should dress up as a Jukebox hero and wear it to both?

7. A study came out that standing for an extra 3 hours a day burns as many calories as running 10 marathons a year. I think I'd just rather stay in the gym longer than stand all day.

8. A new Christian Grey has been named for the “50 Shades of Grey” movie. It's Jamie Dornan (who?) from ABC's “Once Upon a Time” and will take over from Charlie Hunnan who bowed out from the role. He looks cute which is, I'm sure, the main aspect of playing this role. Never read the book.

9. What is it with rappers and cookbooks? Following 2 Chainz, Ja Rule, fresh out of jail, is now writing a cookbook. I wonder if it will feature Ashanti? She's always there on time, so she would be a great assistant.

10. Danielle Fishel (from Boy meets World) took to twitter to rant to the world about talking badly about her younger husband and weight. Celebrities, they're just like us! She was seen wearing a “haters gonna hate” hoodie (I made that up, but sure.)

So there you have it. What do you think is more important?