How to Survive an EDM Festival 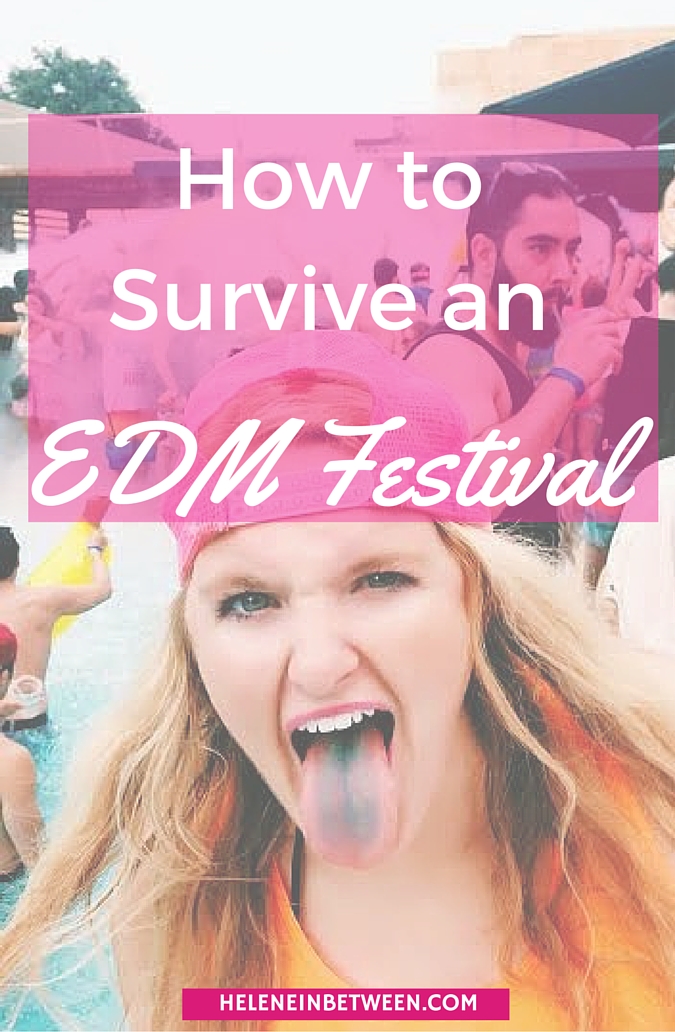 This past weekend I attended the Mad Decent Block Party in Dallas, a dance music festival.  It was set up in downtown next to Club Zouk and they were smart enough to keep it in the shade in the almost 100 degree temperature. Despite it being hot, I saw some people wearing full on animal suits and I just hope they didn't pass out. And if they did, then it's their own fault and I'm not sorry for them at all. 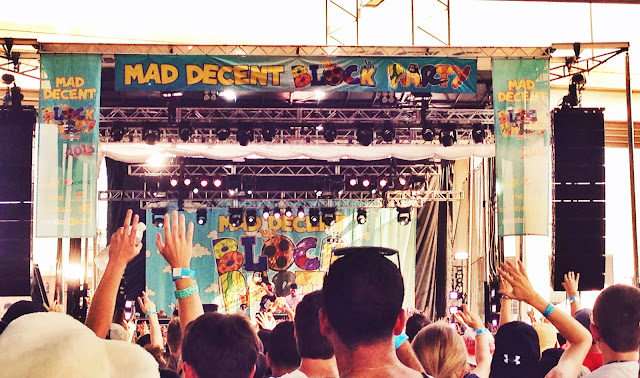 When I was there I noticed the age group at the festival was quite a but younger than I expected (I saw one of my little sister's friends there, who's 7 years younger than me, shudder). But the main thing that stuck out was how slutty these girls dressed. I know, it's hot, but does your mother know you're wearing that?! This is also how I know I'm getting old.
The show was good, not spectacular. We got there just as Flosstradamus was setting up for their set. I was really impressed with Dillon Francis and the crowd went crazy for Major Lazer. But it seemed there was so much base, sometimes it was was hard to hear the actual music and melody.
Since I am at the wise old age if 26, I thought I would break down how to survive an EDM festival. Maybe some of those passed out 18-year-olds will read this and learn. Highly unlikely, but I gotta give it a try.
1. Wear ear plugs.
This is so easy to do. You can get them for under $3 for a pack of 50. Most music festivals try to control the decibel level for the most part, but it's still a good idea to protect your ears. Michael and I were the only ones I saw wearing them. Literally. I even brought extra for my friends and they wouldn't wear them! It really can save your ears from permanent damage. When I'm 85 I still want to be able to hear the beat drop. Or just hear anything in general.
2. Neon clothing 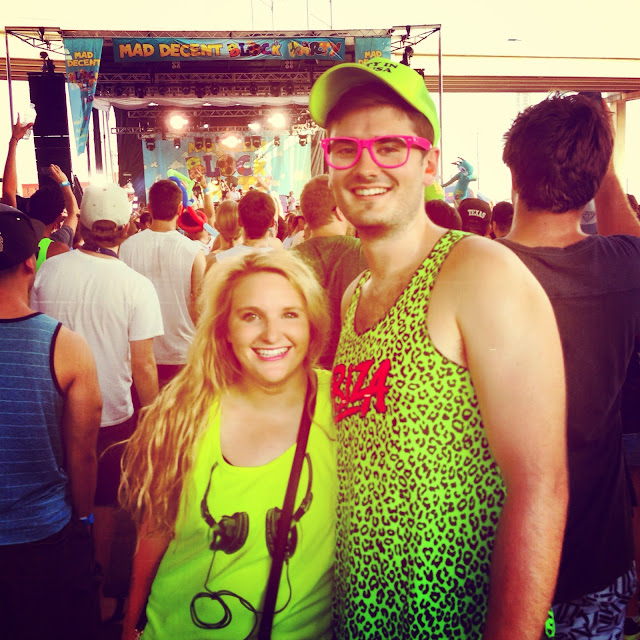 Maybe I should say just wear any clothing at all. I get it. You have a cute figure. But that doesn't mean wear lingerie. I still am in shock with some of these girls. But a benefit of wearing neon clothing or hats is to be able to find each other in a crowd. Plus, neon is freaking sweet and you will get compliments on your neon attire. “Hey, I like you're neon. Did you go to Ibiza?” Why yes, yes I did.
3. Have a meeting place.
Cell service generally sucks with any large group and people are all on their phones trying to get an instavid of whoever is playing. So have a spot everyone knows to meet. Or if you're like me you follow something shiny and get lost easily. This helps with that.
4. Wear shoes. 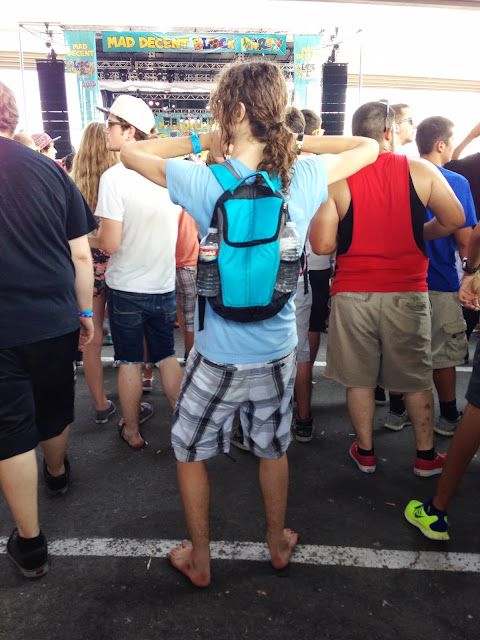 You would think this one is obvious but it's clear that some people get so lost in the music they wind up losing their senses and shoes. I recommend tennis shoes. Sure, those sandals are cute but when people are jumping around they might land on you. Plus it makes it easier for you to dance.
5. Bring friends.
Festivals are always more fun with friends. It's science.
Plus you can drag friends there that have never been to anything like this before and hopefully get them excited about the music and then turn them into EDM lovers. Exhibit A, Sarah: 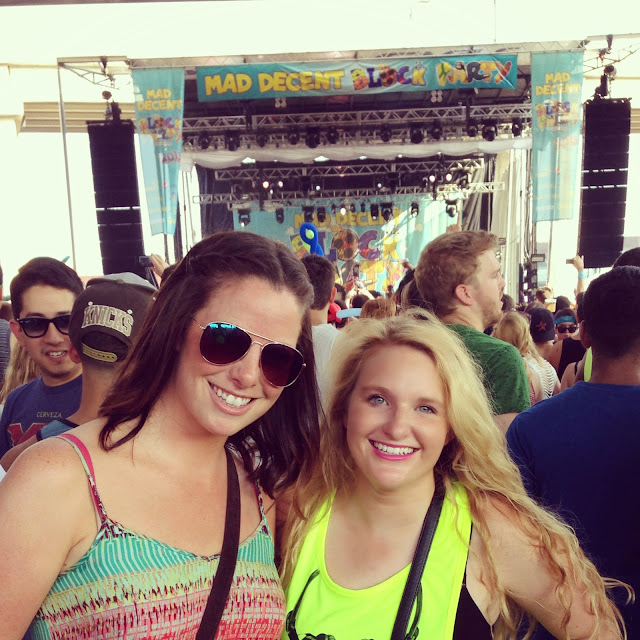 6. Drink water.
Some of these festivals last all day and night which can be exhausting if you're dehydrated. Most festivals will let you bring in a CamelBak full of water. Otherwise you're looking at paying 5 bucks a bottle. You need to drink much more water when you're dancing for hours. They sold Gatorade at Mad Decent and we spent probably $50 on just Gatorade. Also it was totally worth it because it felt like I would have died without it.
7. Know the lineup
Have a schedule and/or map of who's playing and where. This was you can figure out the best times to take a break and see the acts you can't miss. Or don't have one at all and just get lost. This is where #3 comes in handy.
8. Have fun. 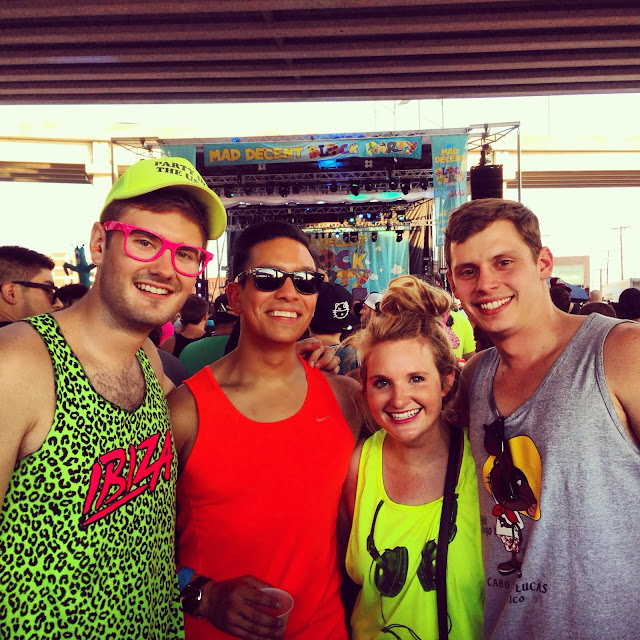 I mean, this is a no brainer but I can't believe the number of people who don't have fun at these things. If it isn't your scene then fine! Just don't ruin it for others. Or do something stupid like get so drunk you're passed out on the ground. That's not a good look.
9. This will not be like Tomorrowland. 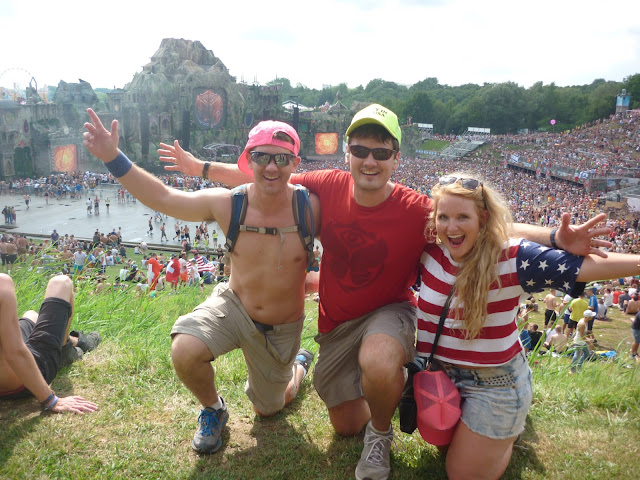 You need to go ahead and lower your standards. In fact, throw standard out the window. Sure, there will be music and lights and that's cool, but it won't even remotely compare to the best music festival ever. Thanks for ruining me forever, Tomorrowland. God, I love ya.
10. Start saving money.
Once you go to one, you have to go to another one. Oh, and then another one. You start collecting bracelets and making t-shirts and talking about “the music.” You are now addicted to it and you're gonna need some more money since these things are really overpriced and well worth it.