Is this season not the worst? Sorry but all these guys are losers. You know it's true. Unless you like beefy guys with no brain. And then if you do, sorry. I can't watch the show without wine, but lets make this more fun. 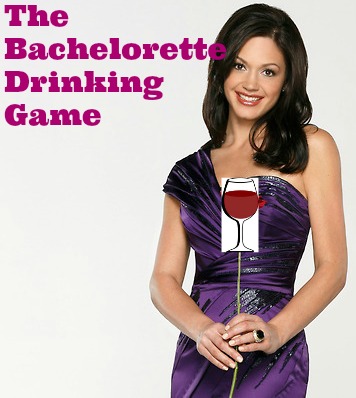 TAKE A SIP WHEN

Des says “dream come true”
A guy gets jealous
Someone says “amazing”
Des says “fairy tale”
Someone makes a statement that doesn't make sense. For example “the Hollywood sign is a representation of Desiree and our relationship” or “love is like hip hop, you gotta go with the flow”
Someone talks about their past
Someone says “the right reasons”
You see someone driving a fancy car
Whenever Chris Harrison walks into the room
FINISH YOUR DRINK WHEN

They kiss
Des gives out a rose NOT during a rose ceremony
Someone steals Des
Chris Harrison says “this is the final rose”
Someone cries
***Update! Now there is a Printable! If you would like to add suggestions please leave a comment below and it will be added to the game!***

Now that you're nice and toasty, let's get to the recap. Feel free to grab a glass. Or the whole bottle.
Brooks has solo date #1 and Des wants to show how truly desperate she really is by trying on wedding dresses. I don't care if that's her job or not. This is awkward.

Then they go and sit on the Hollywood sign. Dinner is set up on a deserted bridge. Hmm, how romantic Bachelorette producers. After he opens up about his divorced parents, she gives him the rose.

Group date has a bunch of guys that will probably leaving the show at the end of the episode. They are making a rap video with Soulja Boy.

You know Soulja Boy is in debt when he makes a music video with the Bachelorette cast. Like he couldn't even get on The Bachelor. The video is making fun of the past characters on the Bachelorette. They end it with some weird dance that hurts my eyes.
Now it's time for talking one on one and also more guys showing how little they have in the brain department. I'm ashamed to say this, but shirtless Zak W wins me over giving her an antique journal.
Bryden gets solo date #2. They go on a road trip and do various road trippy things: like getting snacks, running along the beach, and eating dinner at a spa underneath a lit up tree. Typical. I know my road trips are like this.
Bryden talks about his past and his horrible car accident. Don't worry, he brought pictures along. In the hot tub Bryden is acting like a 12 year old and Desiree has to ask him to kiss her. I would have gotten rid of him right there. But he gets a rose.
At the rose ceremony Michael lets Des know he has type 1 diabetes. But his sob story gets interrupted by Ben. Dun dun dunnnn. Guys are mad, he already has a rose. #boyfight Is he here for the right reasons? Does he just want fame and money? The answer to both is yes.

Token black guy Will and who are you again Michael and Robert go home.

This show is getting exhausting. So many terrible guys, so much time.