Uncategorized
We have a double dose of Sean this week as Chris Harrison decides I shouldn't have a life and have 2 episodes: one on Monday and one on Tuesday.
Great.
First Episode: Hannah Montana
As in, they go to Montana.
Miley Cyrus isn't on this show. But she would kick Tierra's crazy ass and I would love it.
Lindsey has the first one on one.
Her baby like voice somehow charms Sean (kind of like how scary men charm snakes) and she admits: she doesn't know what brought her here (hint: you auditioned), but she's falling for Sean.

The group date is announced, leaving 2 girls left for The dreaded 2 on one. Cray-zay Tierra AND who was that, oh yeah Jackie are the two leftover.
Group date is about making girls wearing too much make up go canoe racing, bailing hay (Sarah's all, Sean do you forget I don't have 2 arms?) saw some wood and drink goat milk, and whomever's makeup holds up the best wins.

Blue team loses against a one armed girl, so it's well deserved.

But Sean brings them back and the red team are sore winners.
Selma says this sh*t ain't fair- oh so you can cuss on TV but you can't kiss on TV?
Desiree is pissed and said she could have just walked through the race, well Des we can just walk through life now can we? AshLee has a soul connection. But really, it's all about Catherine. And she doesn't say weird things like soul connection and she has a real job. Daniella sees the sparks and cries. Sean has a weak spot and gives her the rose. Slow motion lame.
On the two on one they go horseback riding and the producers give Jackie the slow horse.
Then it's awkward dinner time.

Tierra pours her heart (aka strategy) and tells Sean her boyfriend died. Rose success for Tierra. And the producers don't want to lose the crazy yet.

The rose ceremony is apparently held at a taxidermist.
Tierra is being a nutjob and Lesley says it all, “we just want you to answer questions like a normal human being.” But we all know this isn't possible.
Robyn goes home. Even though she thought she was part of the Bad Girls Club and not the bachelor.

They go to Lake Louise. Named clearly after my sister Louise.
First one on one goes to my new fave: Catherine.
She has a nose piercing and she rocks it.
Fun. Cute. Awesome. And no complaints about playing in the snow.

Group Date is more canoes for poor one armed Sarah.
I mean when will it end? Sean- she's not faking it. But Tierra is.
Then they jump in freezing cold water and we all know what happens. Tierra dies.
JK she fakes hypothermia. While everyone else is saying how fun it was.
Tierra's mascara was running down her face as her hands were shaking.

Her scheme works and she gets in bed with Sean and says that he “better marry me.”

Sweet Sean realizes he shouldn't torture one armed Sarah anymore. And sends her home.
I blame Chris Harrison for putting her on the show in the first place and making her canoe everywhere to speak to Sean.

Des has the next one on one date.
Sean is obviously an adrenaline junky and decides they are going to repel down a mountain. I'll pass.
Sean pulls out a Bill Cosby style sweater for the night.

At the rose ceremony Tierra the terrible stays.
It seems even though Selma kissed Sean he wasn't impressed with her breaking family tradition.
She and bad highlights Daniella are sent home. 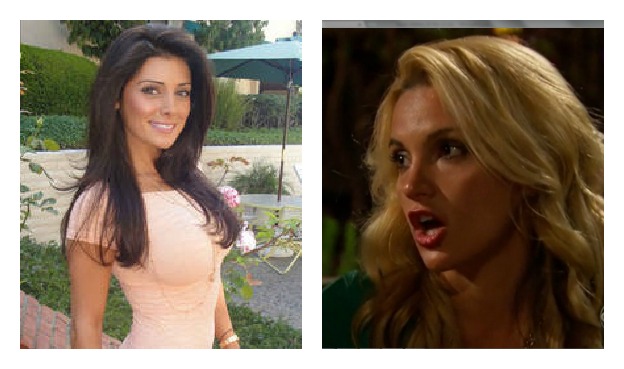 Favorites now are Catherine, Lesley and I'm still pulling for Desiree and AshLee. But she needs to chill out a little.
Wait, no she doesn't, she's on the bachelor afterall.