I can't believe I'm 28 years old and this is the first time I've stepped foot in St. Louis. What's even worse, is my lack of knowledge of this beautiful city. But that all changed this past Labor Day weekend. I got a good dose of St. Louis and all it has to offer.
Naturally, after cramming in as much as we could possibly see, I made a 72 Hour St. Louis City Guide. 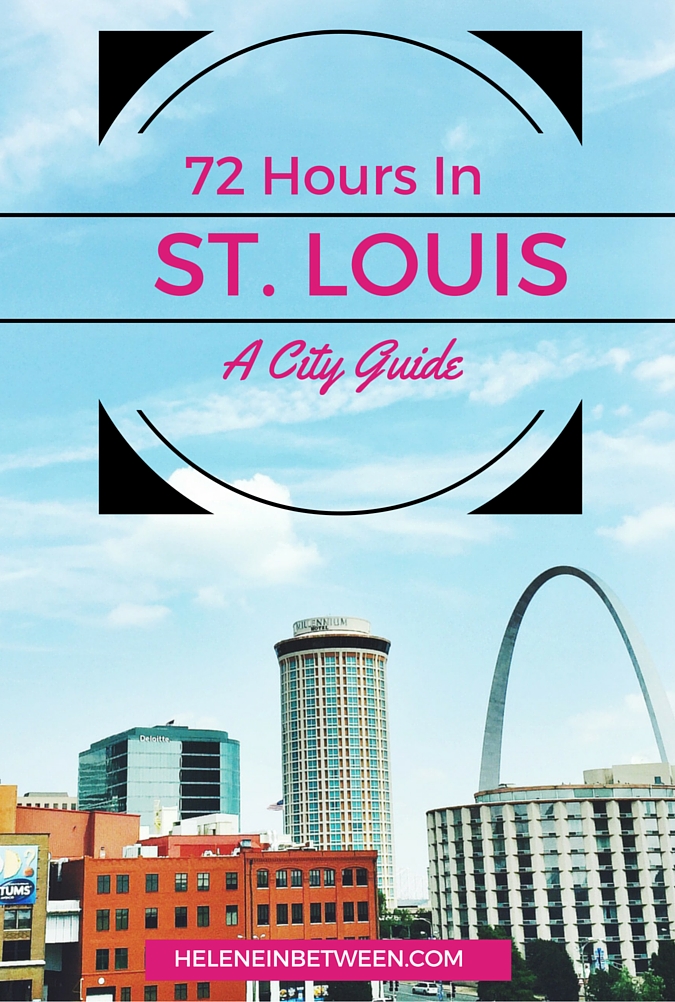 Michael and I made the quick 4 and half hour drive from Nashville to Downtown St. Louis on Saturday morning. We planned to stay Saturday, Sunday, and Monday to try and see (and eat) everything, in between attending our friend's wedding.

Saturday:
We got in about 1pm and headed straight to eat. We went over to the cute (yes, that's the right word for it) Central West End. Full of shops and restaurants, and very near St. Louis University is a quaint area near beautiful stone brick homes. We needed the sustenance since our next stop was a brewery tour.

I've been on a few different brewery tours before but this one was by far the coolest one. The Anheuser-Busch Brewery Tours are worth the wait. Note: we did not wait. People told us they waited 3+ hours. We went on standby for a 4pm tour and waited maybe 10 minutes. I was also told there's no wait in the morning. 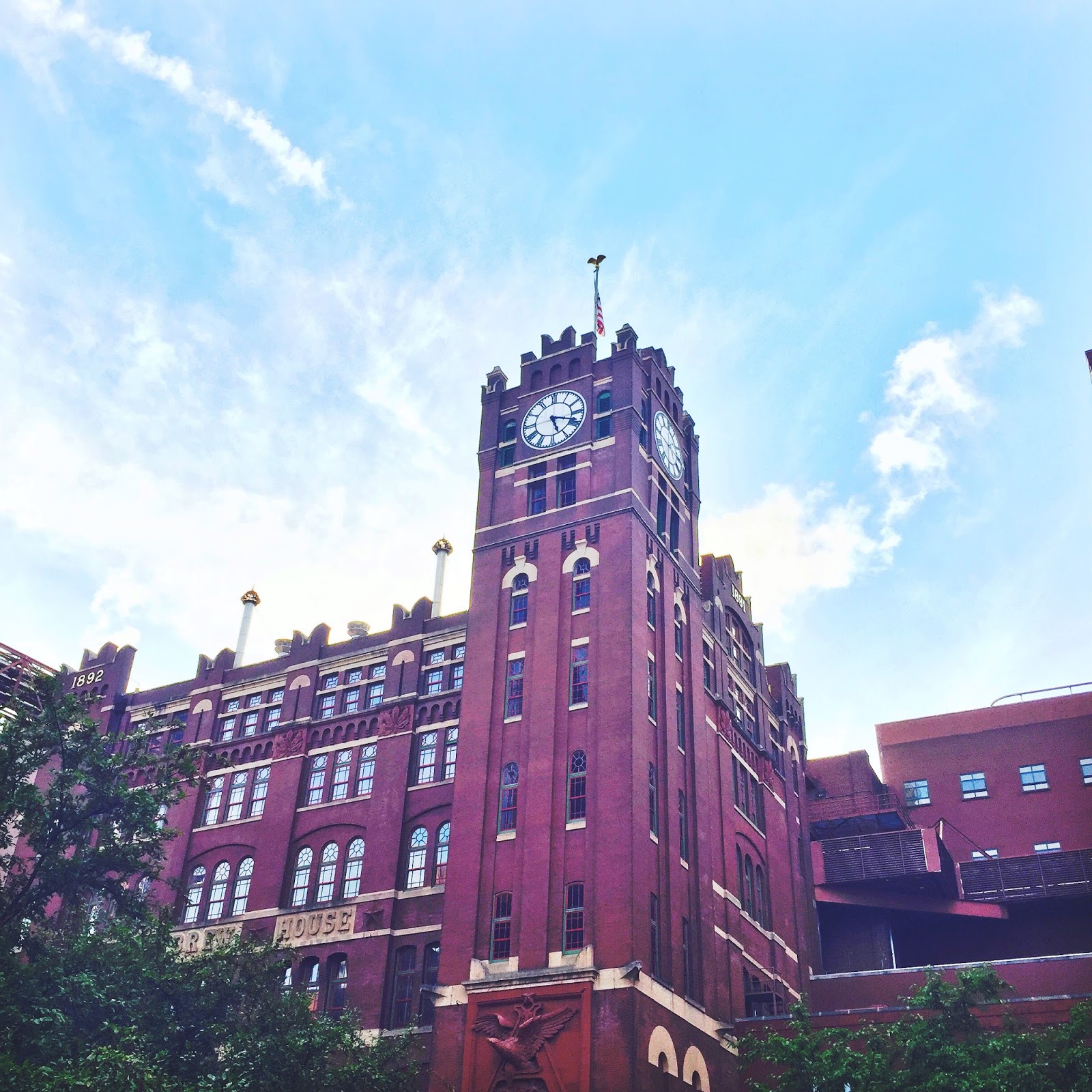 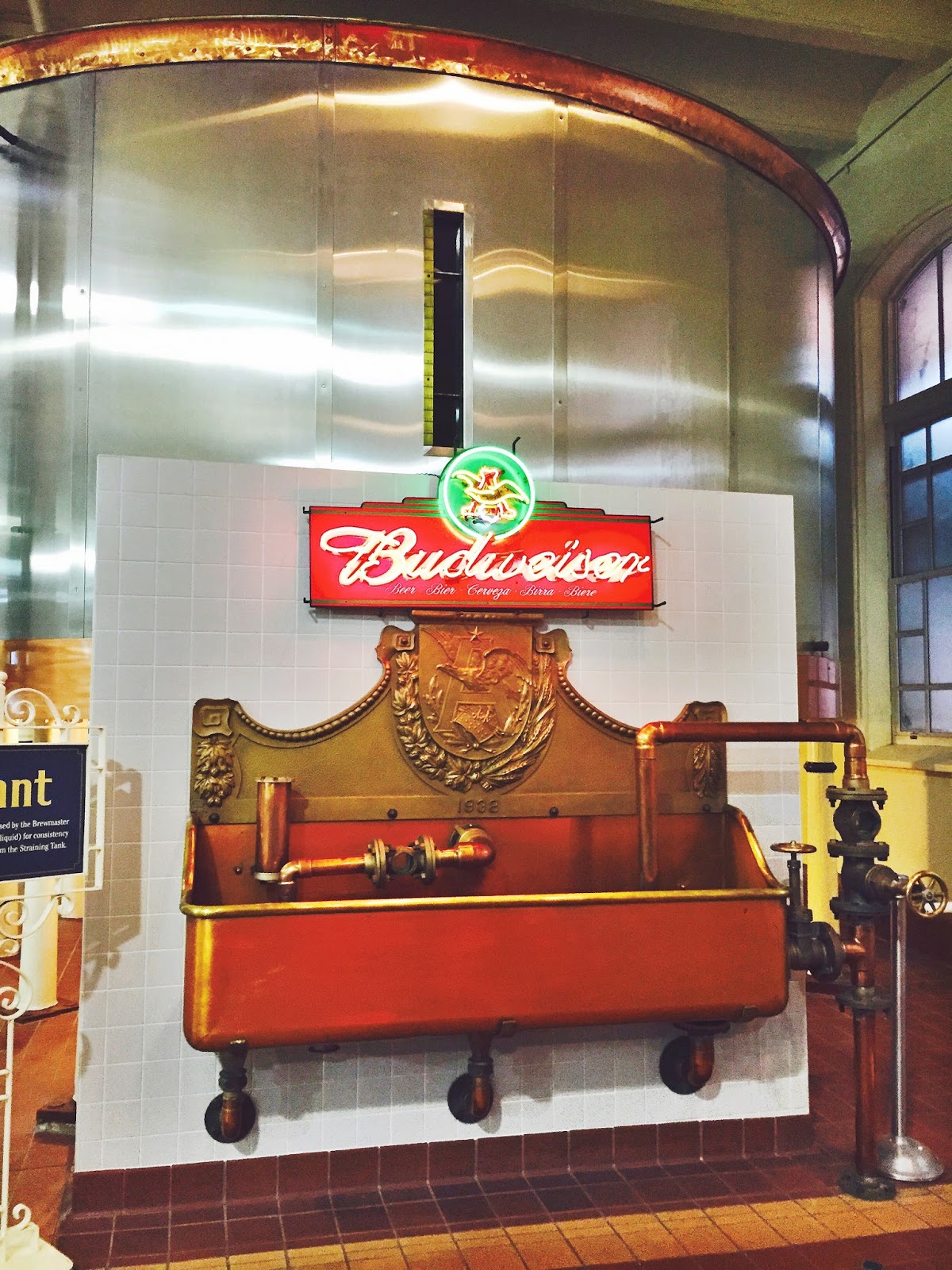 I'm not a beer drinker, never have, never will be. But this beer was really fresh and delicious. You start the tour checking out the Clydesdale horses; which are mindbogglingly large and incredibly beautiful. The deep red bricks are gorgeous in the Soulard Neighborhood of St. Louis. It's one of the largest (the tons of beer is astounding) and oldest breweries in the nation. You end with a free beer on their outdoor patio. The building is beautiful, with cascading stairs, chandeliers, and iron gates.  Oh, and this tour is totally free. 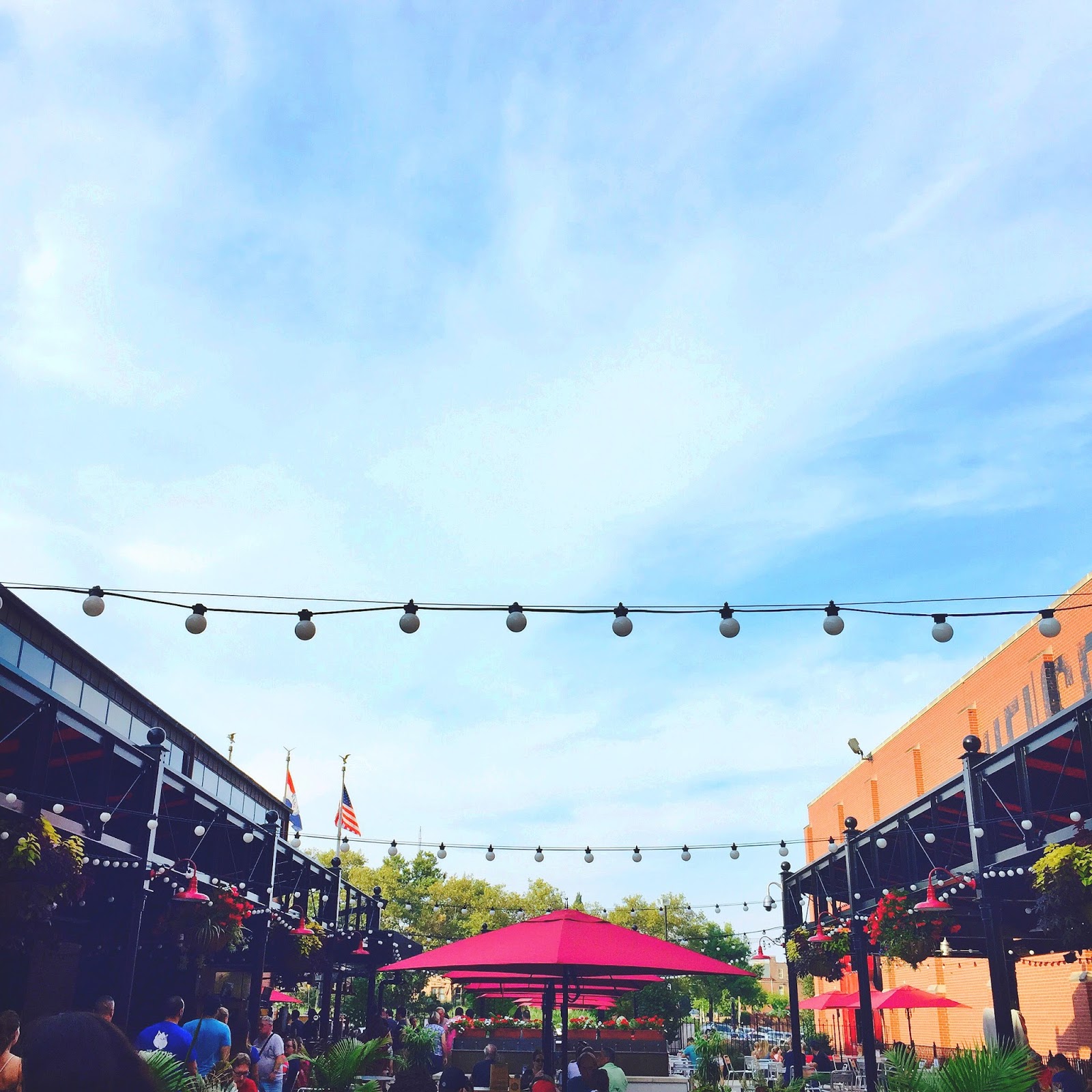 Michael and I did some research beforehand and found out there was the largest Blues Festival in North America going on: The Big Muddy Blues Festival. We bought tickets (only $12) and walked around downtown St. Louis on the way. The festival setup was so cool, one stage had a view of the arch, while the other had a view of the Mississippi.
St. Louis is known for it's excellent blues and the festival proved it's worth. I think I heard the best saxophone player ever. 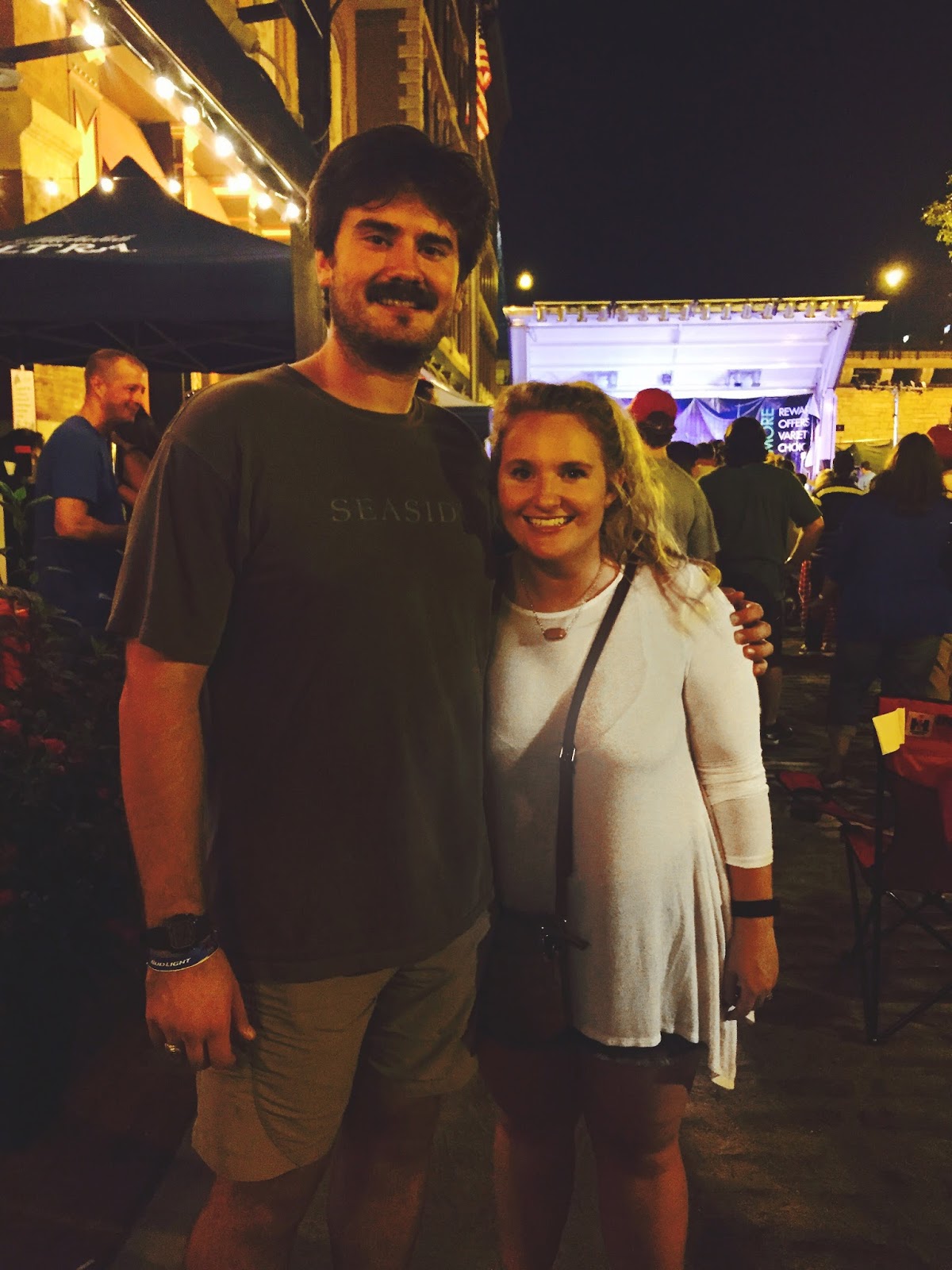 Saturday night, after the blues festival, we walked around Ballpark Village (it was right by our Hilton Hotel) and grabbed a drink at Drunken Fish. You can see the Cardinal's stadium from that area and it's just a fun place to hang out, especially after the Cardinals play.

Sunday:
This was the day of the wedding, so we woke up relatively early to try and go up to the top of the Arch. We were told that it was terrifying (and this doesn't help when I'm scared to death of heights) and that there were extremely long lines. We didn't have either.
We got to the ticket desk about 9:45 am (despite it saying tickets were sold out online), paid $10 each, and were told to come back for our spot at 10:25. I was really nervous as we made our way down to the loading area. The Gateway Arch is 630 feet high (that's 3 football fields) and looks tiny from the ground. 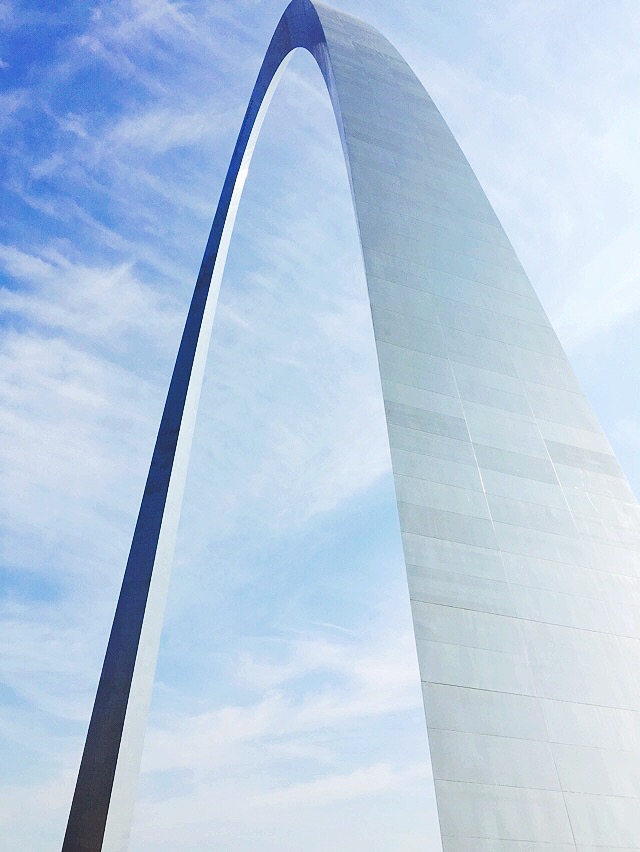 You step into a small, enclosed tram for a 4-minute ride up the leg of the arch. The tram is tiny, and fits only 5 people- which, in my opinion is kind of pushing it. But it has air going through and you can't see out as you go up. When you get to the top, the view is breathtaking. You can see all of Downtown St. Louis from the west and the Mississippi River to the east. For someone who is terrified of heights, this is totally worth it. 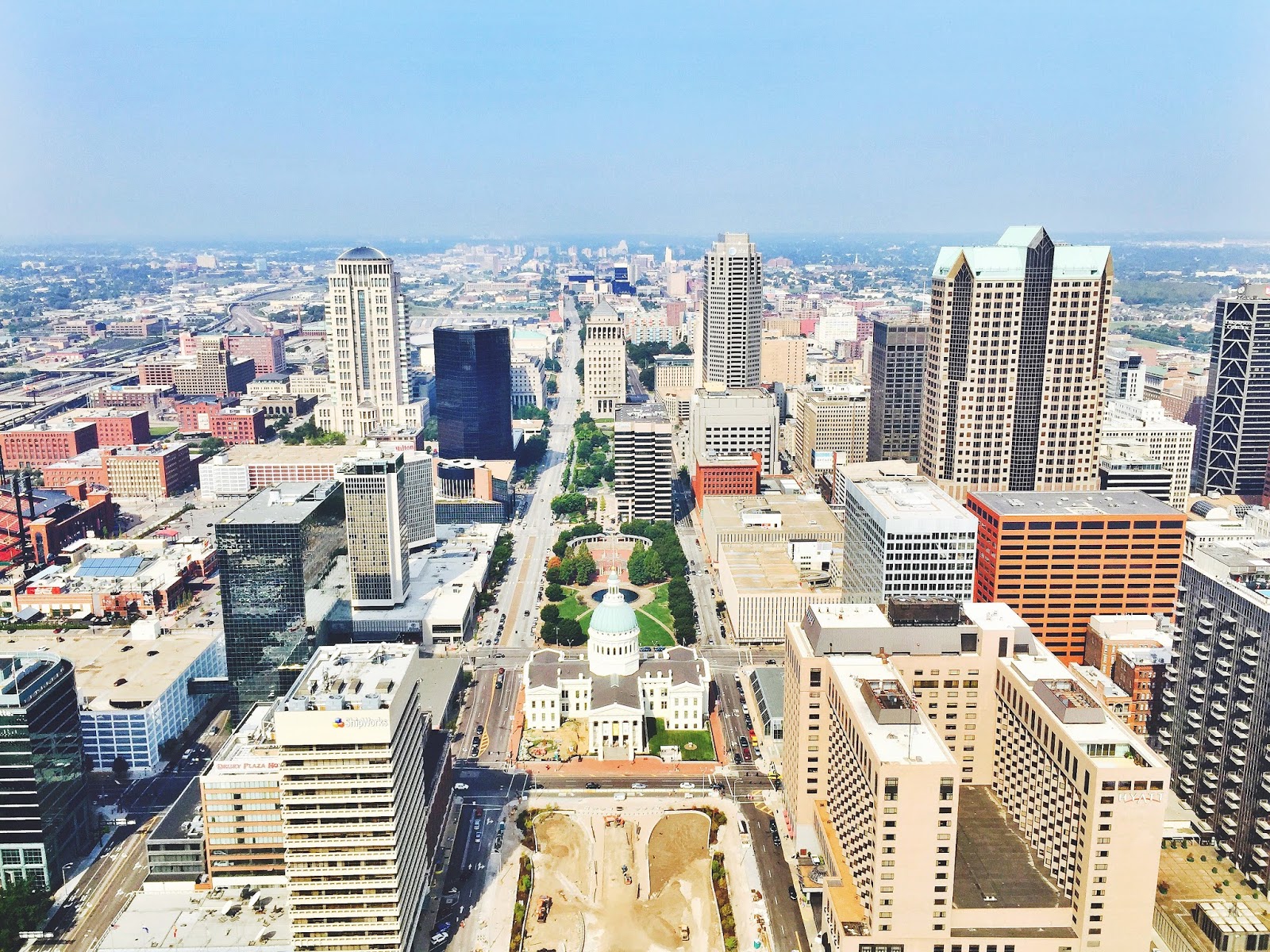 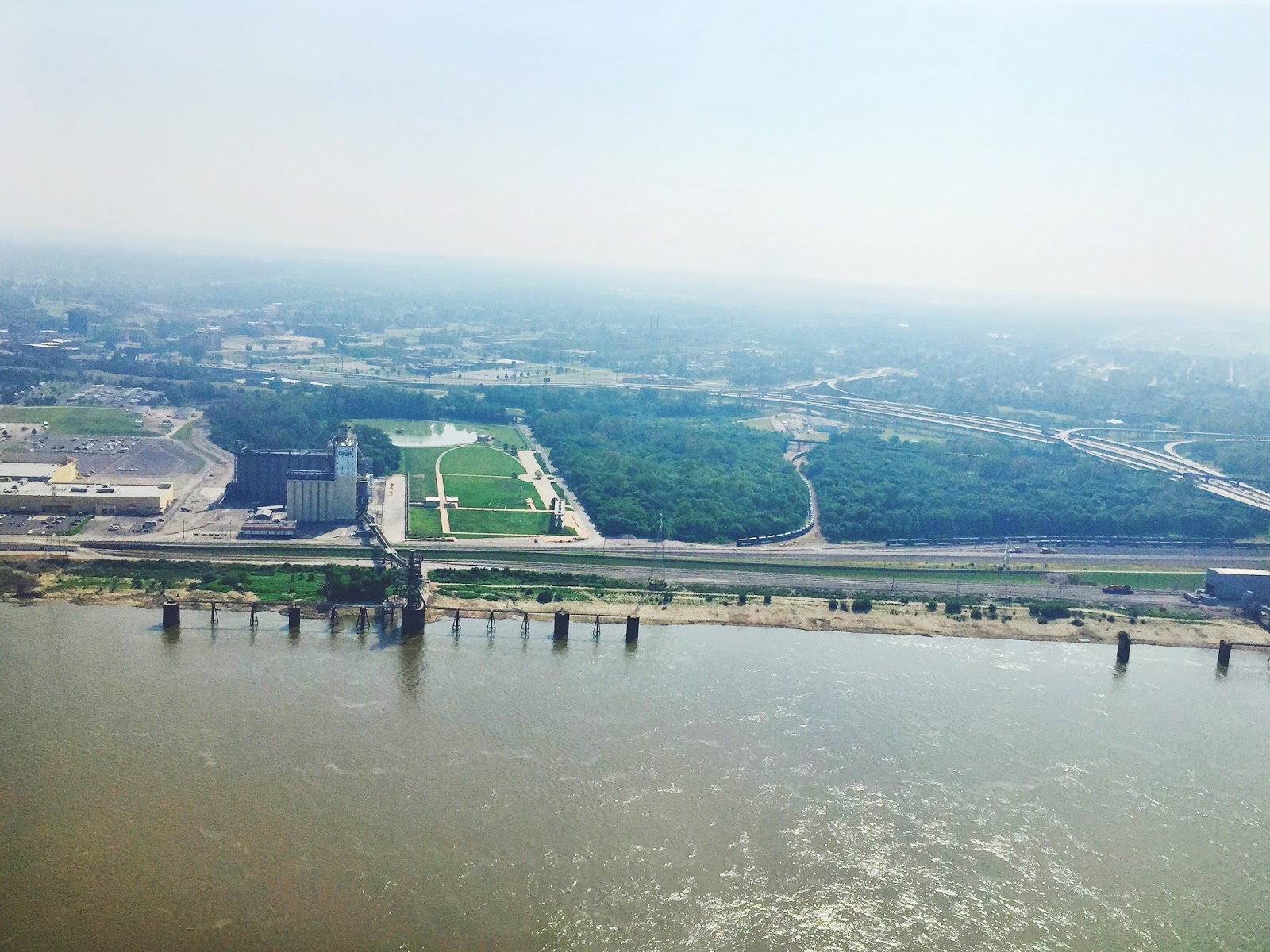 After the Arch, it was time for the wedding. This also took place in a historic location in St. Louis: outside at the Pavilion in Lafayette Park. It was set aside from the St. Louis Common in 1836 and is one of the first public parks. As a tradition, after the wedding the bridal party went to various spots in St. Louis to take photos, while we drank margaritas at a nearby restaurant. 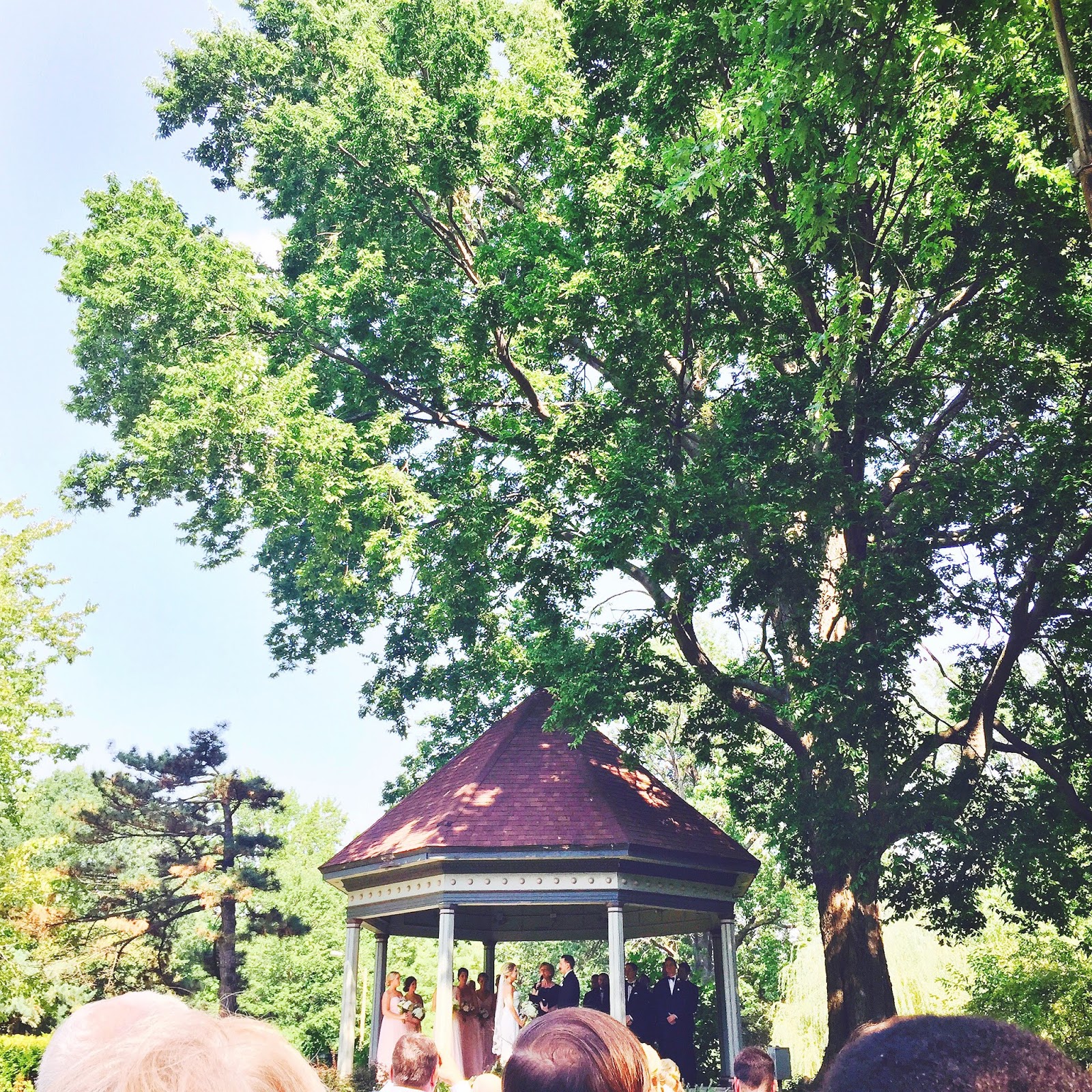 The after party for the wedding took place at the bars. The first stop was at Humphrey's– which has been around since 1976. Then it was time for some dancing and we made our way over to Wheelhouse. (If you follow me on snapchat, username: helenesula, you saw the dancing that went down). Lots of Nelly was played, naturally.

Monday:
Michael and I were up and at 'em despite our late night. We went over to Forest Park first, to explore. I'd been wanting to see it all weekend since it hosted the World's Fair in 1904, plus it makes me think of the movie with Judy Garland: Meet Me in St. Louis. (Can you tell I was a theater nerd?) My favorite spot was the Jewel Box with gorgeous flowers and greenery against the all glass greenhouse. 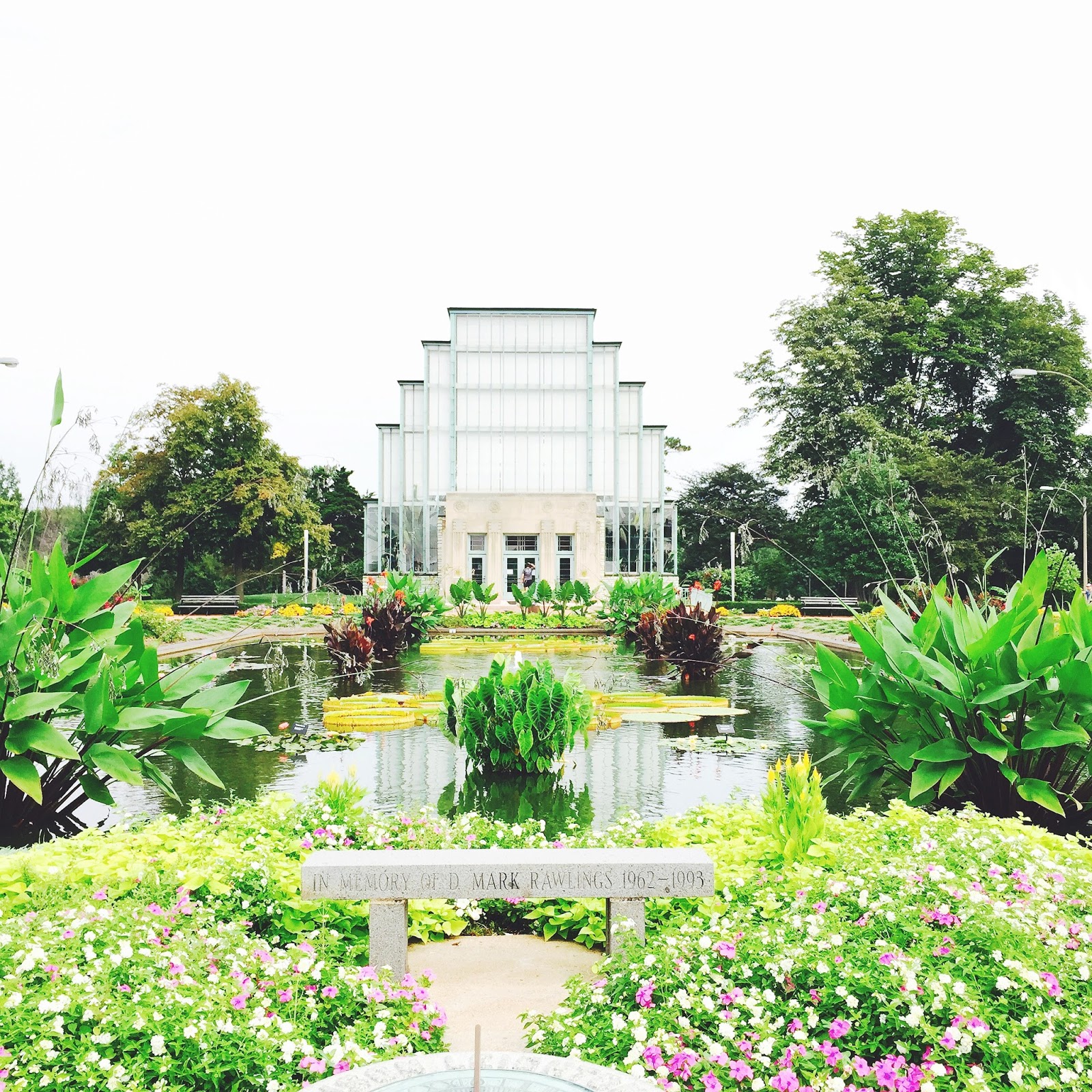 We then ventured over to the Greek Festival near the park, again, totally free. This was there 98th annual St. Louis Greek festival held at the St. Nicholas Greek Orthodox church. Full of authentic Greek food, music, and dancing. It made me want to go back to Greece.
After the festival, we walked off some calories at the Cardinal's stadium.

Last on our list, and probably best of all was Ted Drewes frozen custard. It was completely out of the way we were going to head back to Nashville, but we didn't care. Custard comes first. After making the quick decision Michael opted for the S'mores and I got the cookie sandwich- made with scotch oatmeal cookies. Worth it. 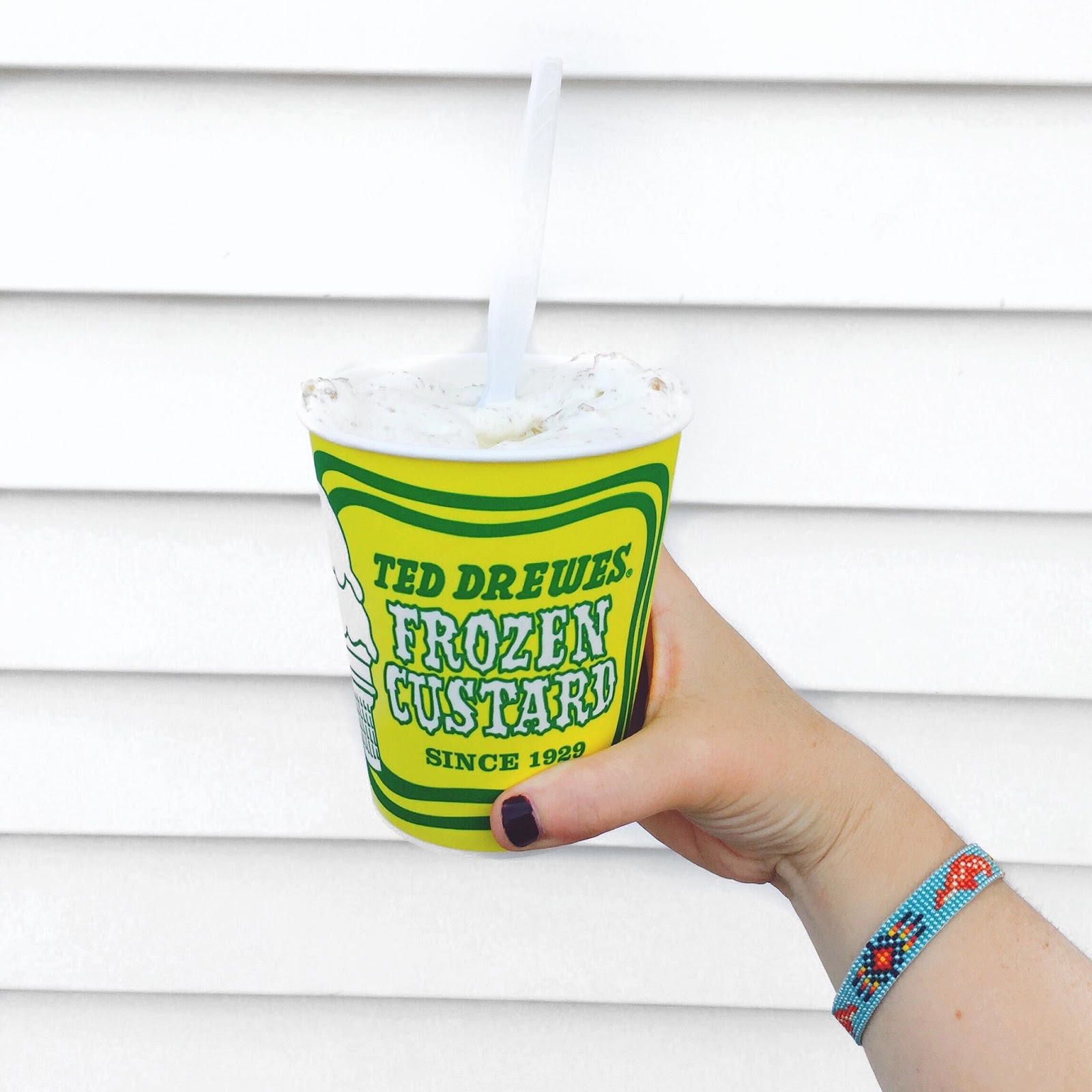 We didn't get to hit up every single attraction in St. Louis, but for only spending three days there, I think we knocked it out of the park.

Note: I don't wait in lines. We tried to eat at both Pappy's and Bogart's but the line was way too long. we opted for The Southern (fried chicken) instead and it was awesome.

Have you been to St. Louis? What should I add to my list?