Return of The Meme 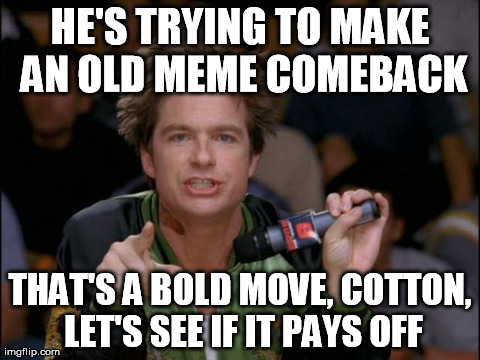 A little over a year ago my picture was taken off my blog and turned into a meme. I haven't thought about it for a long time. Until yesterday.

It's really never a good thing when I have an influx of Facebook messages. Yesterday, I checked my Facebook and saw that people were commenting on the picture. I wondered why in the world it was being shared again. Last night I looked at the share count and it was over 5,000, when I looked this morning it was over 9,000 (update, well over 9,000 times now). To an image I thought was removed.

I'm not going to link to the Facebook page. I'm also not going to share the image again. Afterall, “My Face is A Viral Meme” is now one of the most popular posts on my blog, isn't that great?! You can see that image and read about what happened there. The basic premise was that my photo was taken from the blog, text was added about anti Obama care, and then it was shared. A lot.

Here's my problem with this whole thing:
1. It's my photo, taken from my website, without my consent.
2. It's used way WAY out of context. So far out of context it's kind of funny.
3. The word “conspiracy” is spelled wrong.

I had people messaging me: Hey! My friend just shared this. Well, maybe you need to get some new friends if they are going to spell “conspiracy” to “consiracy” yep, no P.
It's something I feel like I have no control over that continues to buzz aimlessly around the internet. I thought it was taken down but apparently it's on more Facebook sites than I realized. What also bothers me are the comments. One guy commented saying, “You're a loose whore.” To me. Like I was really this person. Others were pretty funny: “Pay up baby. this is the real world.” One person commented letting them know that I am, in fact, a real person. The guy replied with “(Name) was probably sexually abused by her father.” It's just ridiculous and filthy.

The internet is a weird place. People can do and say things the way they want. This is why I shy away from talking politics on this blog. I think people are very set in their ways and get heated way too fast. But really, if you're going to make something viral, at least get the grammar right.

Anyway, if you see my face on an anti-Obama care ad, please don't share it. Or comment with something like, hey the word conspiracy is spelled wrong. Maybe then people will stop. But probably not.