Read the Book Before the Movie

Last night Michael and I got into a heated discussion. Some might look on and call it a fight, I'm calling it a tense dialogue. I like discussing things with him when we have differing opinions. Partly because both of us are extremely stubborn. If we think we're right we won't back down and neither will submit defeat. Last night was no exception. 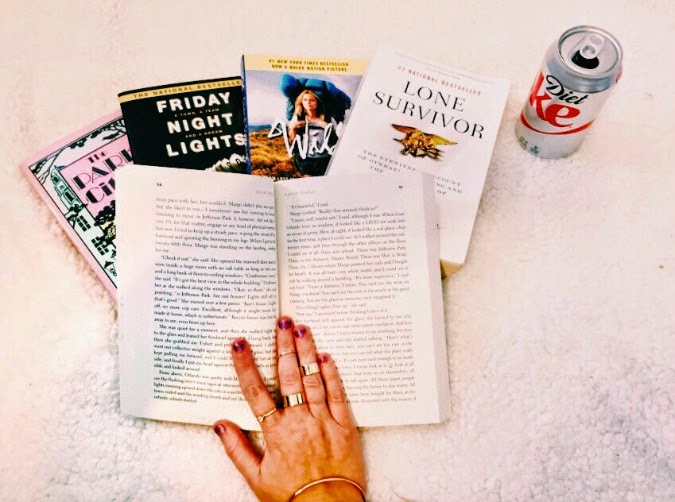 The night before last I couldn't sleep, so I decided to read. I was about halfway through John Green's (author of “The Fault In Our Stars”) “Paper Towns” and spent over three hours finishing the rest of the book. Because, you know, that's what normal people do. I was so pumped up that I started another, “Wild” by Cheryl Strayed. The one currently out in theaters with Reese Witherspoon as the lead role.

At dinner last night, I told Michael about the book. He looked at me quizzically, “Are you sure you want to be reading that?” I had no idea what he was talking about. I assumed because it was a book about a strong woman and so I snapped that we needed strong female roles in this day and age. But that's not what he meant, of course. He meant that because this was already a movie that I should see it before reading it.

No! Excuse me? That's not how it's done, you read the book then watch the movie. Duh. But Michael did bring up some valid points. He asked me when has the movie ever been better than the book. I couldn't think of one. He said that you spend the whole time finding faults in the movie, or pieces missing, that are lacking because the book articulates it better.

I countered that seeing the movie might ruin the book. He is currently reading “Lone Survivor” because he loved the movie, and he explained therefore, he knew he'd love the book. He said there is a really interesting development about one of the people in the book that he would have missed in the movie. Now, he can just focus on the book. He also mentioned that it helps paint kind of a picture of the book and likes to see how others would imagine it.

I feel the opposite. You might lack motivation after seeing the movie to actually read the book, since you'll already know what's happened. And usually, Michael is always wrong.

So what are you? Book first, then movie? Or the other way around?