Deep Fried in the Heart of Texas

Fall means one thing in Texas: The State Fair. Each and every year, for 24 days, the city of Dallas is transfixed on heading to Fair Park to enjoy the best fair in the world. It's a fact. I know it's true, because I've asked people. Maybe it's because Big Tex looks down on you as you eat a Fletcher's Corn Dog while gazing at the statues made out of butter. Maybe it's the music acts and dog show and pig races that draw you in. Maybe it's the carnival rides and the lure of plush stuffed animals you can win. Maybe. But the real answer is fried. Fried food. 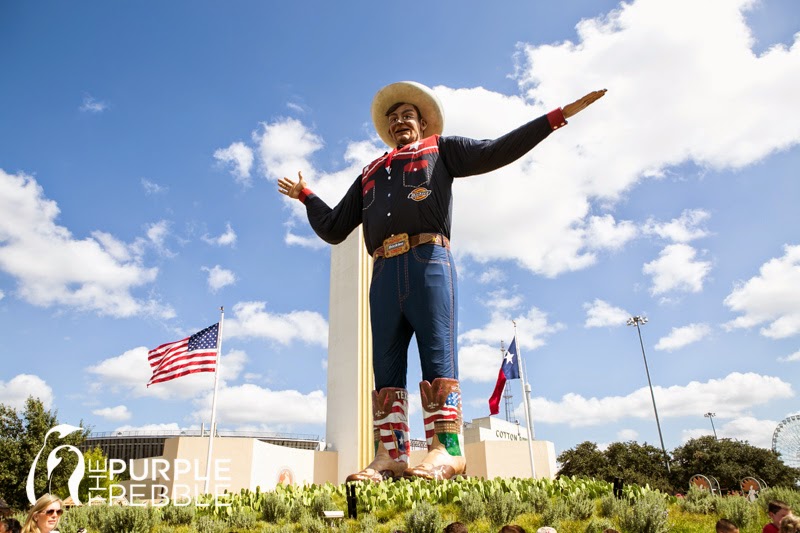 My pick: Fernie’s Down Home Chicken Pot Pie Pocket with Mac ‘n Cheese Dip (Plus Fernie's is a legend! More below)

Save money to go to the fair, cheap tickets for the State Fair for 2016:

Thrifty Thursdays- this is a new promo that offers discounts on food. Special food pricing is available every Thursday of the State Fair of Texas – October 6, 13, & 20, 2016. Featured items include State Fair classics like corny dogs, cotton candy, funnel cakes and participating food vendors.

Dr Pepper HALF PRICE After 5 – Any day after 5 p.m. bring in a Dr. Pepper can to receive half price tickets to the fair.

McDonald's Discount – Discount coupons are available at McDonald’s locations throughout North Texas on tray liners and bag stuffers.  Bring coupon to the gate and SAVE $5 off general admission tickets or HALF OFF a children’s tickets

Dr Pepper $5 Tuesdays – Any Tuesday pay only $5 for your ticket to the Fair with a Dr. Pepper can. Note: must be empty!

$4 admission with donations – Bring 4 cans of food for donation to State Fair gates any Wednesday of the Fair and receive a coupon for a $4 admission tickets.

$6 Thursday with Coke – Bring an empty 20 oz. bottle of a Coca-Cola product and receive a coupon for a $6 admission ticket to the State Fair.

$13 Fridays with Kiss FM – SAVE $5 on general admission tickets to the State Fair on Fridays. Download and print a coupon from the KISS-FM website. 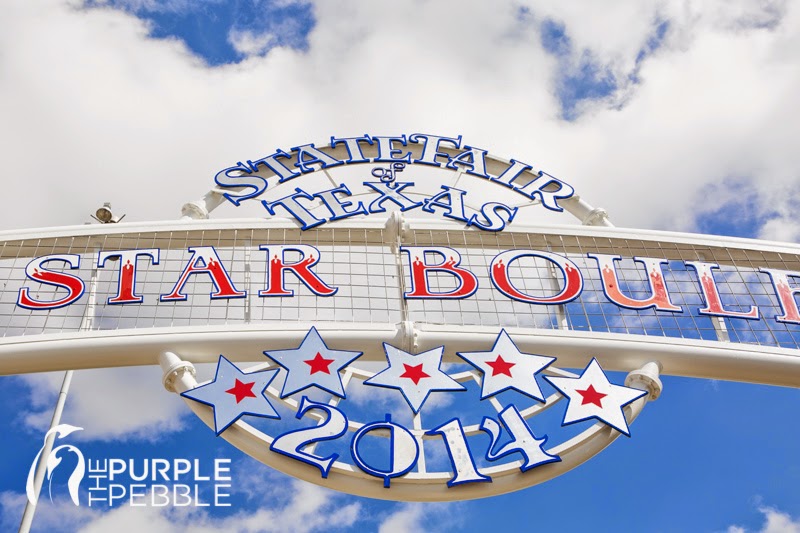 The State Fair of Texas is the fried capital of America. Just about anything that's edible has been fried by the masters of the fair. Twinkies, oreos, bacon… even beer. Each year, there's a contest to see which fried food gets the crown for the Big Tex Choice Award of Best Taste and Most Creative.
This year, I set out to the fair to try the best of the best and the newest creations. Let's just say, I was not disappointed.
The first stop was Stiffler Brothers. Tammy Stiffler was recently on Deep Fried Masters with her fry creations. She's been at the State Fair of Texas for a number of years and has the awards to prove it. I asked her if any other fair compared, “Minnesota is okay, different. But Texas has it made.” I agree. 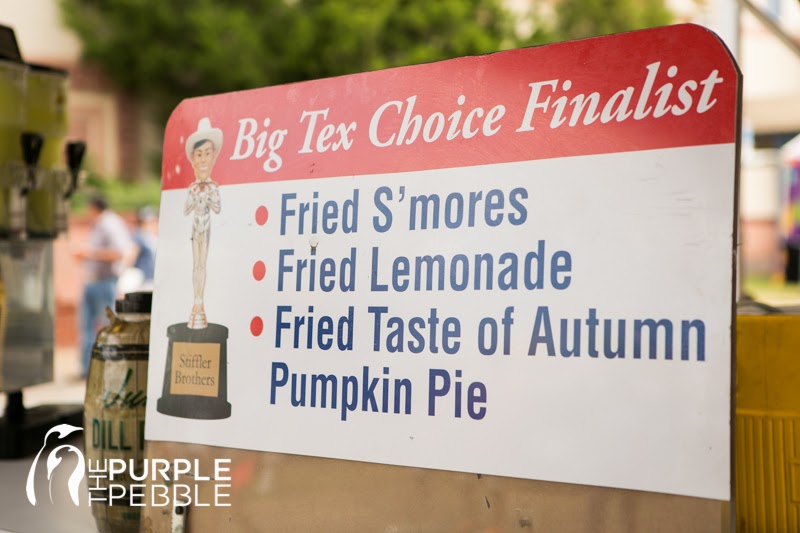 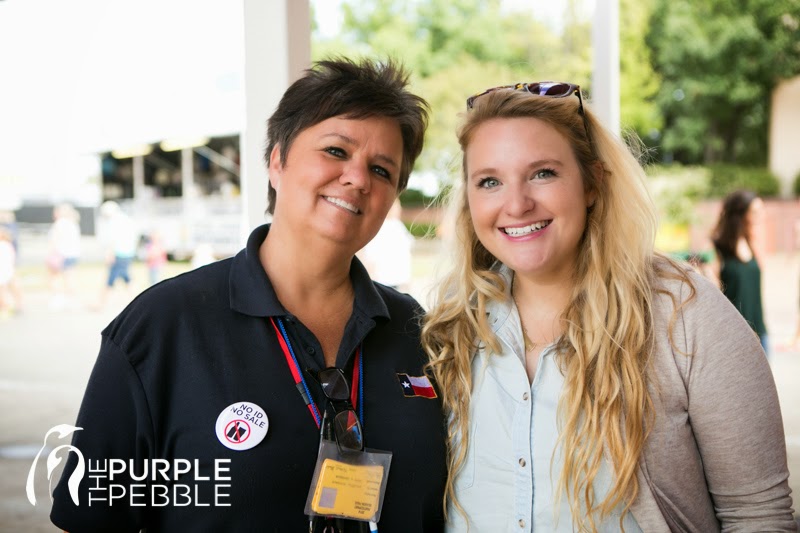 We started off with the delicious fried chicken in a waffle. If you're hungry, start here. A huge portion of chicken, fried, of course, and put in a waffle with gravy and a surprise at the end. 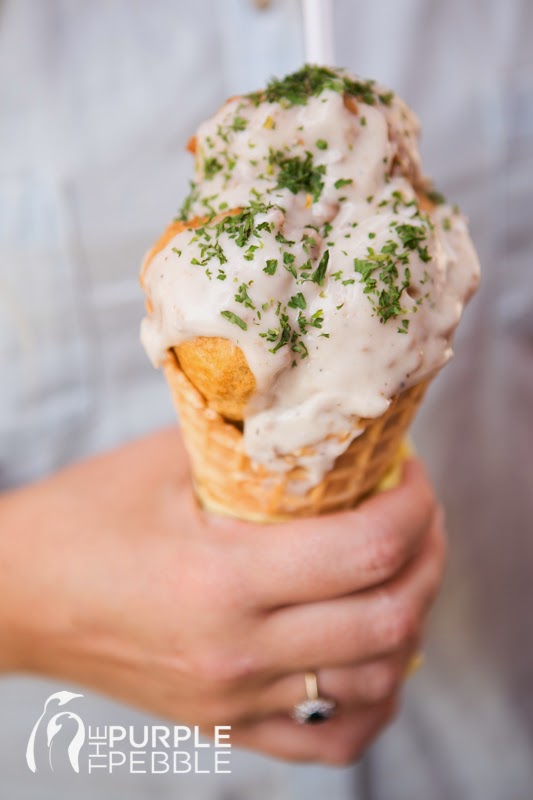 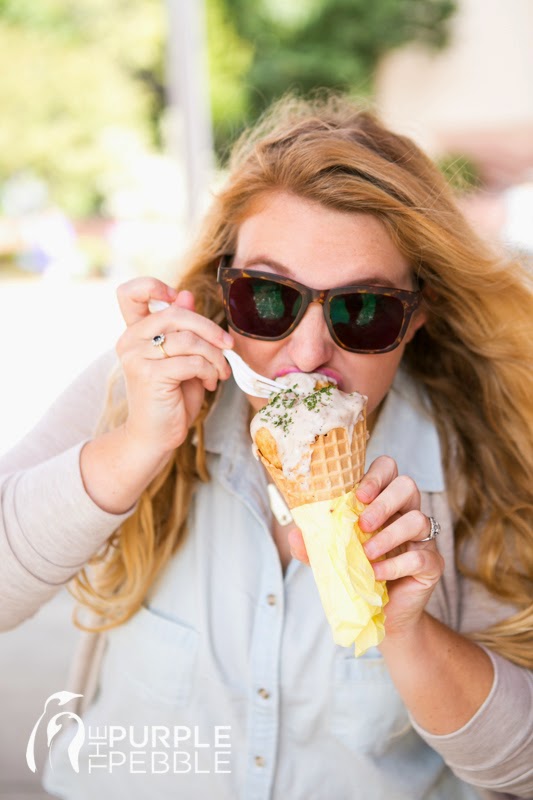 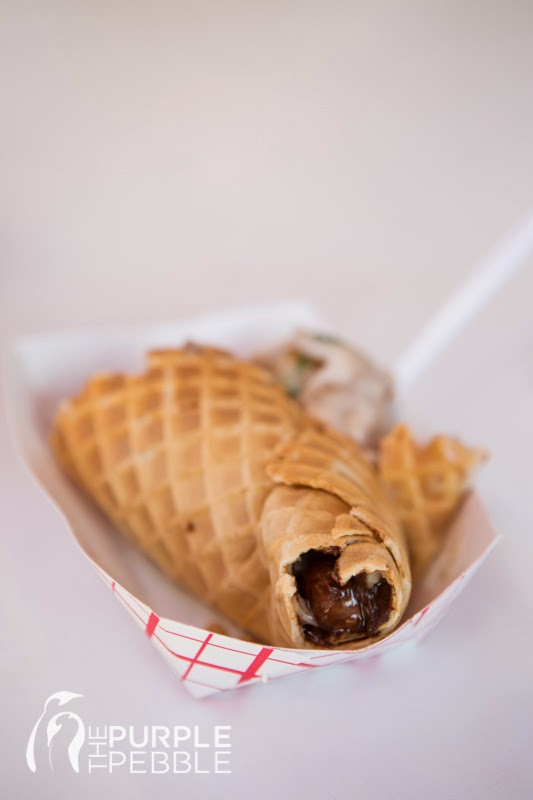 That's chocolate with a malted milk ball. It's a nice change at the end of something savory.
One of the most flavorful options are the fried stuffed olives with jalapenos on a stick. I could eat these all day. 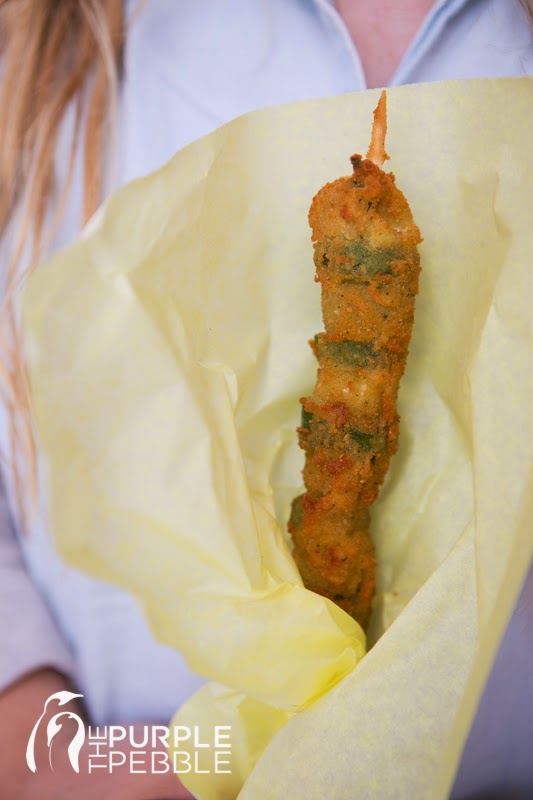 Then it was on to the sweets, my favorite part. We tried the fried autumn pumpkin pie. This was probably my favorite fair food ever. The ginger is a standout flavor and the mix of pumpkin and whipped cream are worth the tickets. I'll be back to purchase this later on. We also tried the fried lemonade. If you're a fan of the super sweet – this is for you. I clearly enjoyed it all. 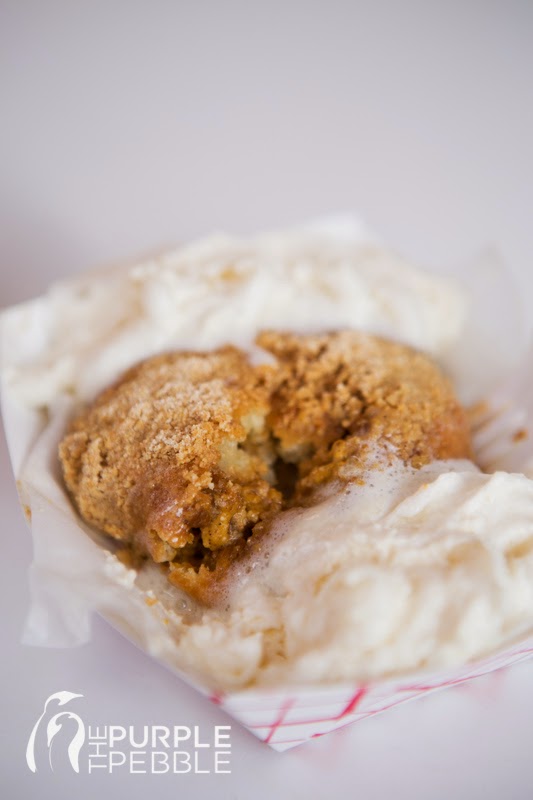 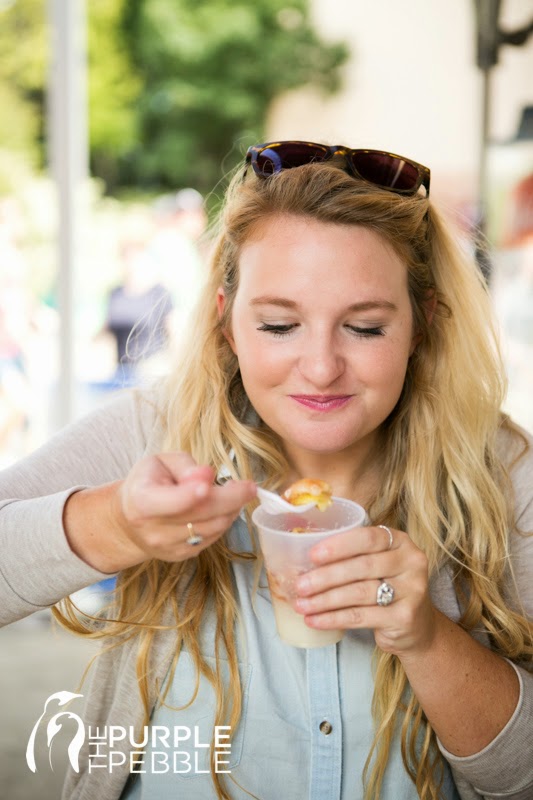 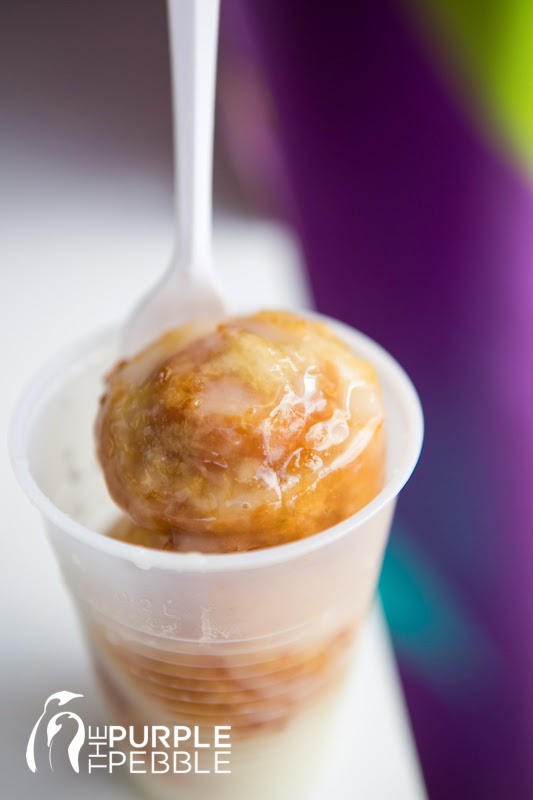 I asked, how easy is it to get a booth at the Fair? “Near impossible,” Tammy said. Oh well, maybe I'll try next year.

Then it was on to the Big Tex winner for best taste, the Fried Gulf Shrimp Boil. 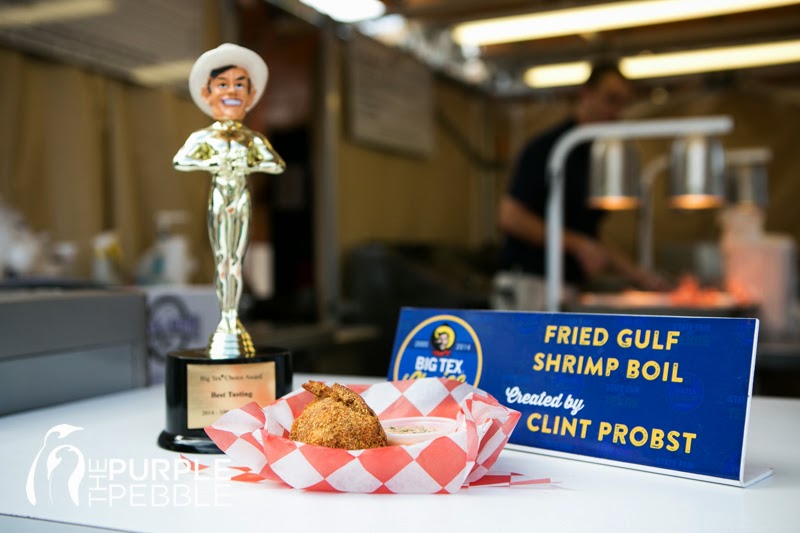 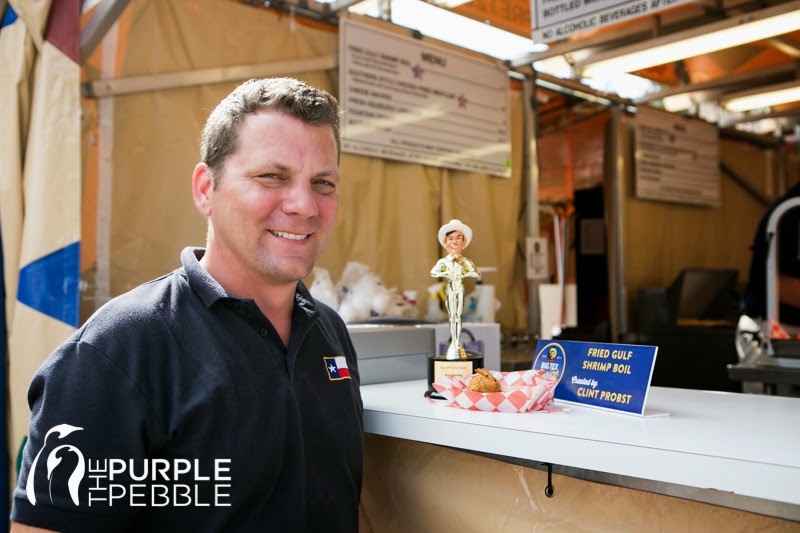 After one bite, it's clear why this year's winner was unanimously voted as best taste: it's got it all. It really is like you're getting a whole shrimp boil in your mouth, fried. Potatoes, corn, and of course, shrimp are present in every bite. I asked Clint how he came up with the concept and he told me that he wanted to take something you'd never think of to fry so boil it was. He and his wife (she also runs a booth at the fair called “Fair Hair” where kids can get their hair done!) and two kids love seafood. Living in Baltimore and traveling the south he combined the concepts and brought great fried seafood to this year's fair. 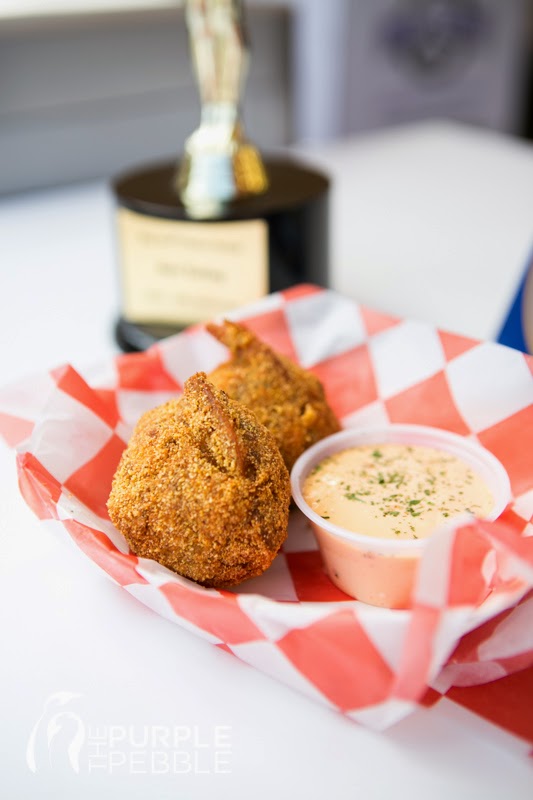 Our last stop was at “The Dock” for Fernie's Famous Funnel Cakes. Fernie is an institution here in Texas. After all, she brought funnel cakes to the fair! Fernie runs the business (even still, as she's in her 80s!) with her children.
We started with fried peaches and let me tell you, this is an explosion of flavor. They're dipped twice – once in batter and once in the crumbs. Last year, they sold over 8,000 pounds of peaches. My favorite part was the delicious vanilla cream dipping sauce. In 2009, these won the Big Tex Choice award. I asked Christi, Fernie's daughter, what it's like to work with the other food vendors at the fair, “Oh it's like one big family. But when it's time for the Big Tex choice awards, it's a friendly food fight!” 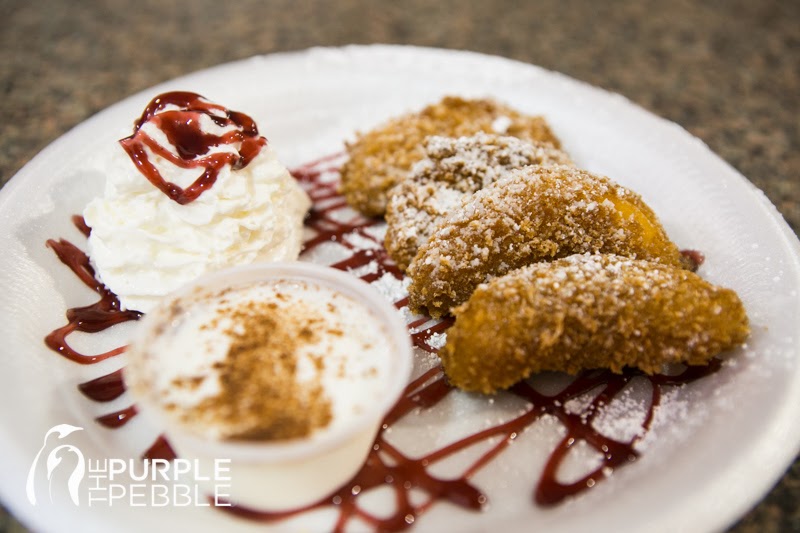 Then it was time for the main event: a funnel cake! You really can't beat a funnel cake at the State Fair of Texas. The perfectly fried pastry with powdered sugar is the best way to spend a day at the fair. While eating we glanced at the wall and the pictures of Fernie with Oprah and other celebrities, so I had to get one with her as well. 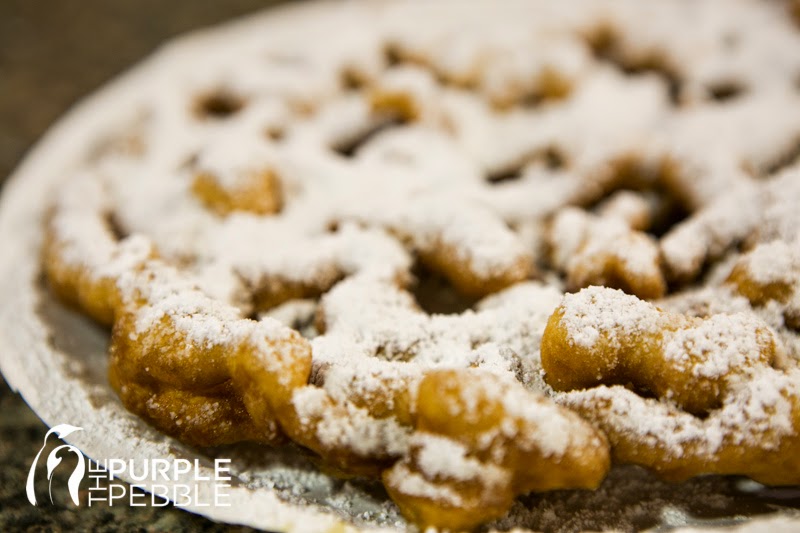 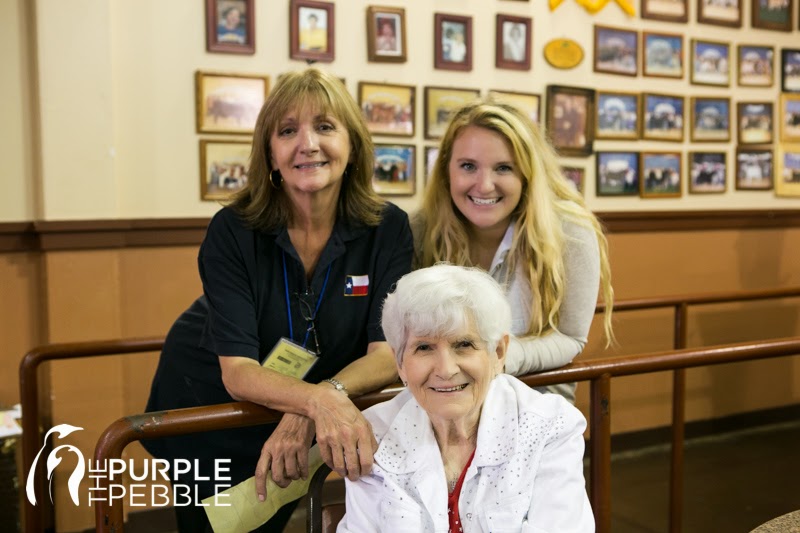 What I was amazed by, was how many of these people the business owners employ. Many of their workers have been with them for 15-20 years! It's a business you want to be a part of. I can't wait to come back for more!
See you at this year's State Fair of Texas!

All images by the immensely talented Alexandra at The Purple Pebble.