It's the greatest time of year: The State Fair of Texas. Oh, I understand that there are others, but they simply cannot compete. I honestly cannot think of a time when I did not go to The State Fair of Texas.  From being a being a child and my mom and dad taking me to get a Fletcher's corn dog. To going with friends and taking pictures in sombreros in the photo booth.

The other day, I got into an argument with a girl who told me she hated the State Fair. While I knew we could never be friends because of this, I asked her, shocked, as to why she didn't like this great tradition? She reasoned that it was too crowded, there wasn't enough to do and it was too expensive. She's wrong on all accounts.
So, I thought I'd give you my take on the State Fair and why you can't miss it. Even if you don't live here, you should come. I promise.

This is the most important aspect of the State Fair. Each year dozens compete to come up with the best fried food. This year the best tasting winner is the “Deep-Fried Cuban Roll.” And the most creative is the “Fried Thanksgiving Dinner”
I tend to stick to the classics: Fletcher's Corn dog, cotton candy, and fried cookie dough.

There are so many things to see and do at the fair. This is where I don't understand people. Um hello: dog shows, pig races, African Acrobats, Chinese Acrobats, Pumpkin Carver, Bird Show, petting zoo, Car show, Music and more. I saw Destiny's Child perform one year (this was a long time ago, when there were 4 members) and it was basically the best thing that ever happened. There's something for everyone.
Most of these activities are on the weekends, but you can still do some fun stuff during the week. 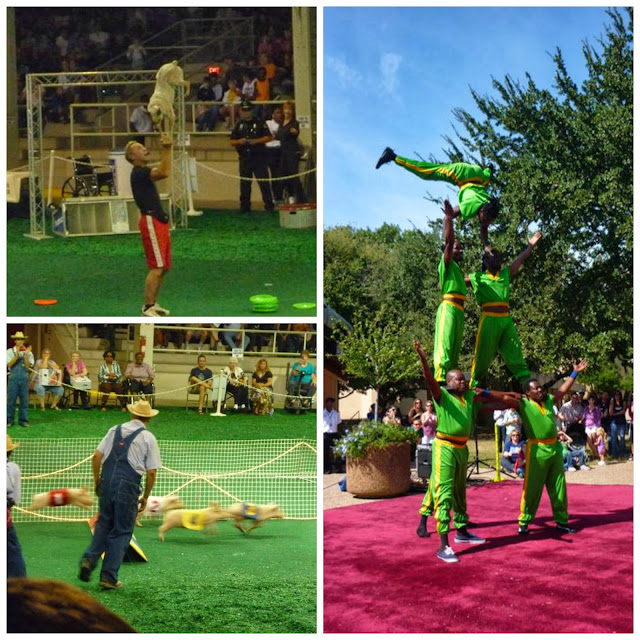 You won't catch me riding them, but there are plenty if you like being flipped upside down and side to side. One year Michael made me ride the Ferris Wheel (aka the Texas Star). He decided it would be a fun joke to jump up and down while we were on it. He's lucky I'm still married to him today.

One of my favorite memories is Michael desperately trying to win me a prize the first time we went to the fair. He was unsuccessful. The next time we went I won myself a huge stuffed dog. Sometimes, girls are better than boys.

There are so many days when the fair is discounted.
Season passes: If you're a State Fair fanatic, there's no better deal than the season pass. A pre-purchased pass for $39.95 will allow you to go as many times as you like. It also comes with a one-day-only guest ticket & a free ticket to use at any Cinemark theater. You can also get a season pass at Kroger for $34.95.
North Texas Food Bank deals: They have teamed up with Kroger for a special deal every Wednesday, anyone who brings in at least three cans of food gets in for $3
Anyone 60 and over: get a $4 discount from the regular price, but every Thursday during the State Fair is Senior Day, can get in absolutely free.

McDonald's coupons: Eat at any area McDonald's, and you can get a coupon for $3 off general admission, good for any day at the fair. They also have a coupon where a child can get in for half price when an adult pays full price, a discount of $6.50.

Dr Pepper deals: Each can is good for $5 admission on Tuesdays or $8 admission any day after 5 pm.
Coca-Cola Thursdays: Every Thursday is Coca-Cola Thursday, where an empty 20-ounce bottle is good for $6 admission.
Cinemark Thursdays: A ticket stub from any Cinemark theater gets you in for free on Thursdays.
KISS-FM Fridays: Go to the KISS-FM site and print the coupon for $5 off general admission on any Friday.
Discount on Midway rides: On any Tuesday, all rides except for thrill rides and the Texas Star are only six coupons, a savings of anywhere between two to six coupons (or $1-$3) per ride.
And you can also keep it cheap at the fair. Go to the Women's Museum for $1 soft drinks and water. The Food and Fiber Pavilion has free sample and $1 milk.
So don't tell me you don't like the fair. I'll see you there!

Deep Fried in the Heart of Texas