TomorrowWorld 2014: Rage The Night Away 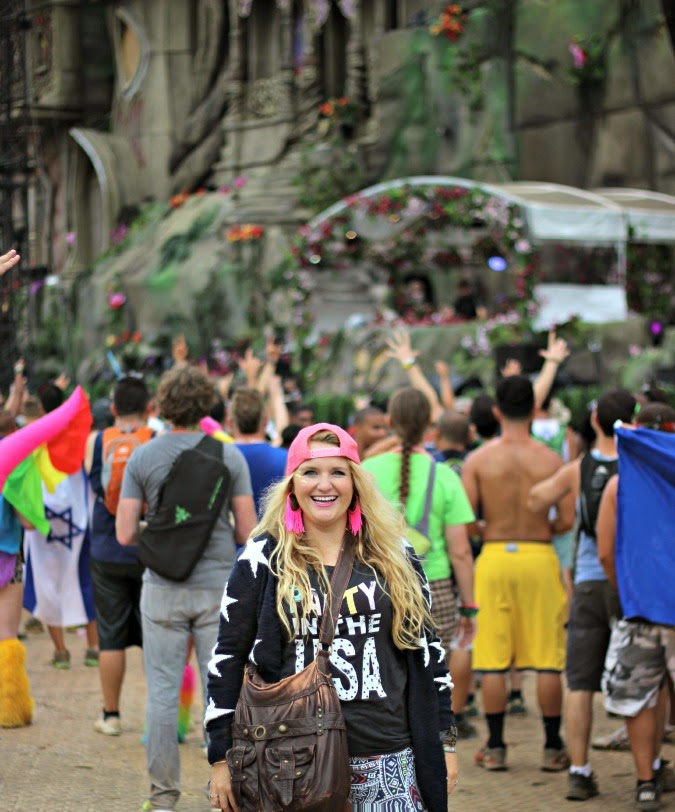 Let me just tell you that I love festivals. Some people don't. Too crowded, too long, too tiring, just too much. I, on the other hand, love it; I can't get enough of the scene. But TomorrowWorld, whether you like festivals or not, just does it right. The production elements alone are a reason to go to the festival. But add in names like: Steve Aoki, Tiesto, Zedd, Nicky Romero, Showtek, Tommy Trash, Martin Garrix, Diplo, Skrillex, Kaskade, and David Guetta, and you have an unforgettable experience.
I was lucky enough to go to the inaugural TomorrowWorld last year and have attended Tomorrowland (in Belgium) three times before. Each experience is different, but I loved the vibe at this year's festival in Atlanta's Chatahoochee Hills. 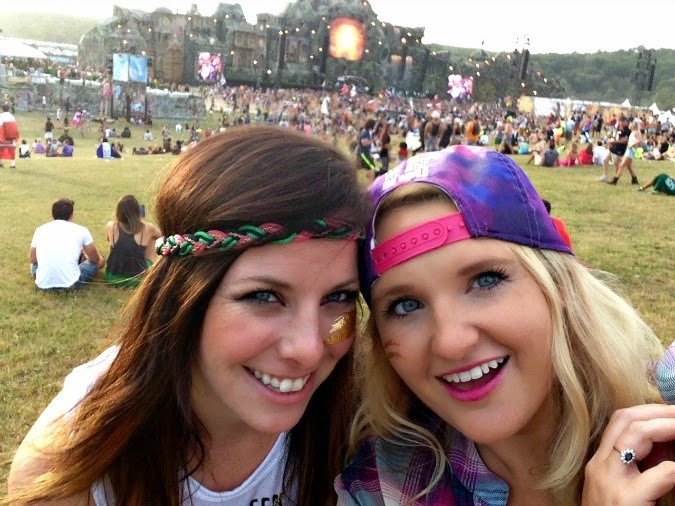 I even converted non festival go-ers (Sarah) to love it just as much as I do. You can't not have fun. 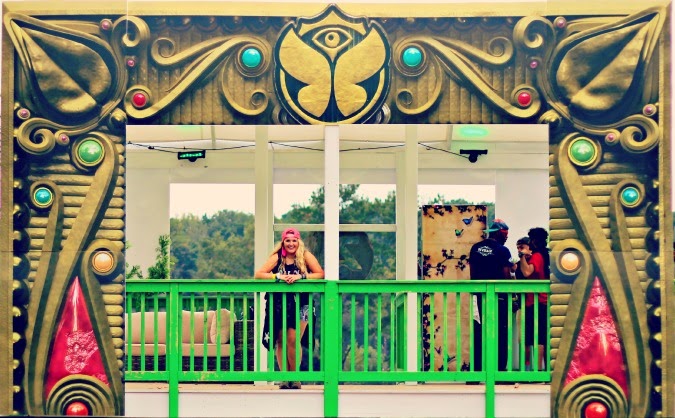 The stage this year came from Tomorrowland last year and the theme is the “arising of life.” A Mountain like stage equipped with waterfalls, lasers, smoke, fireworks, and a top that bellows fire during the performer's sets. Here are where some of the big name DJs play, although there were plenty of artists at all the stages this year that I wanted to see. 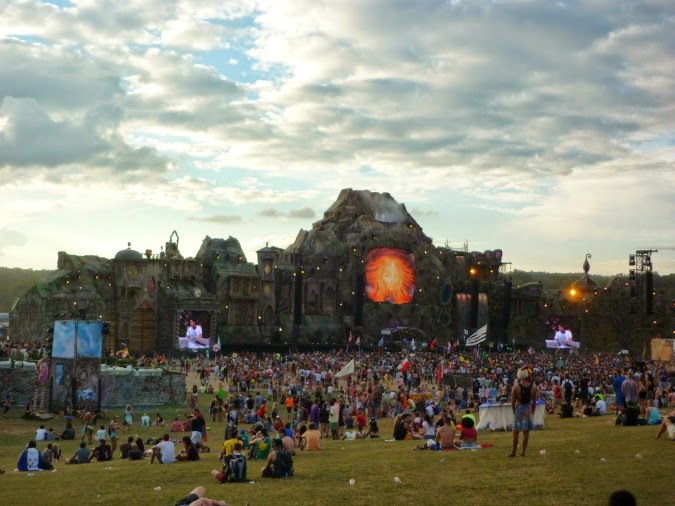 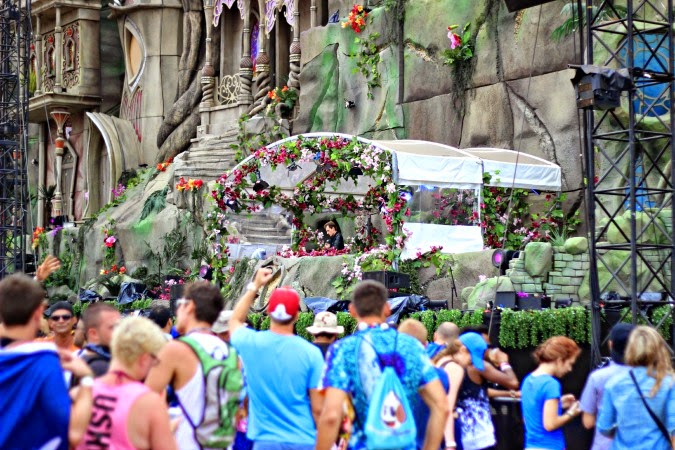 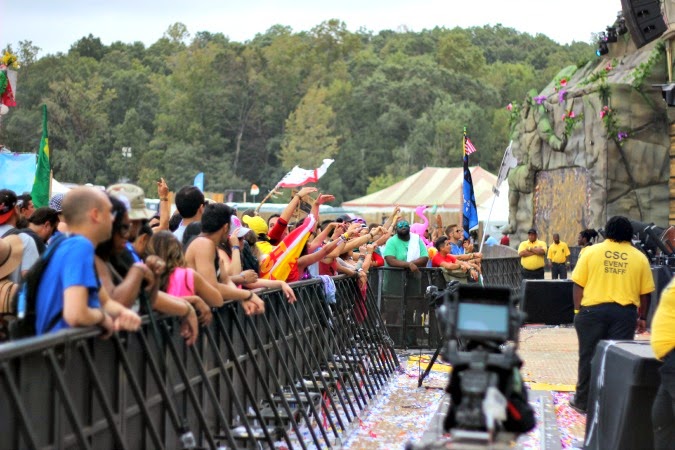 I could write a whole post on the main stage of Tomorrowworld. But I'll leave that to The Festival Queen. Here's one two more image of the stage at night lit up by fireworks. 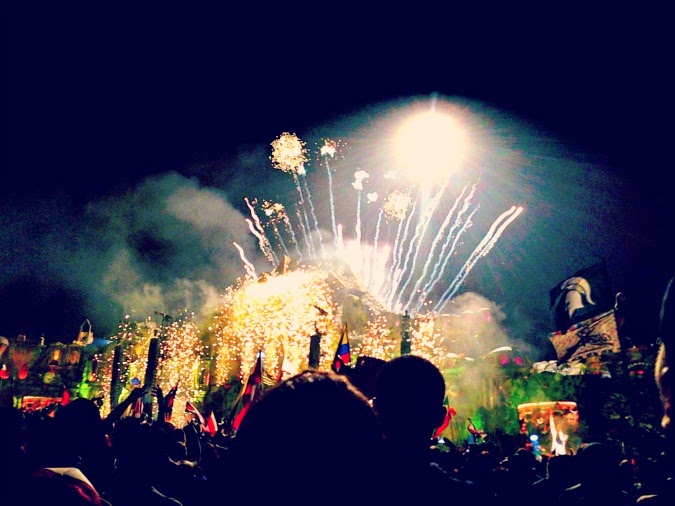 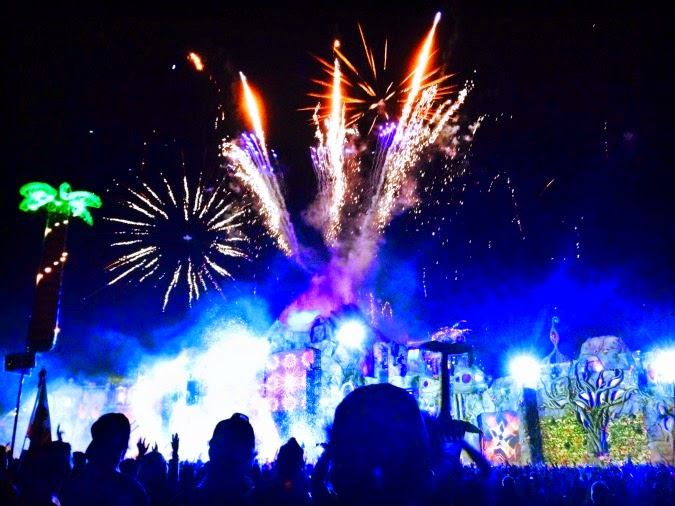 Okay, okay, on to the other stages of Tomorroworld.
The Q Dance Stage has what appears to be a mote around it. 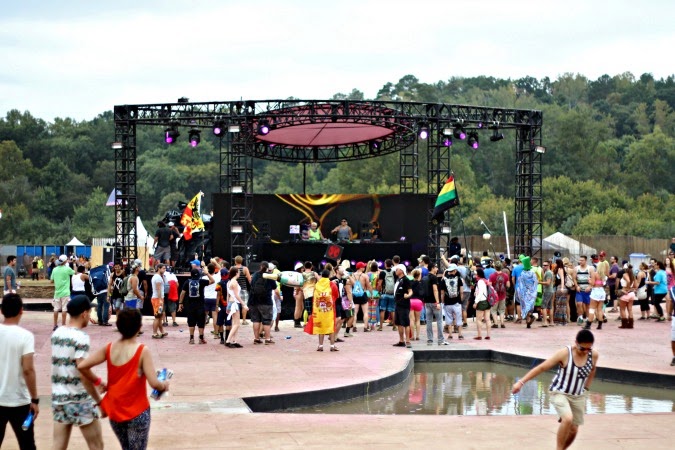 But a bird's eye view will show you that it's in the shape of a butterfly. Here many Atlanta artists performed.

The Full On (or Super You and Me) tent had artists like Audien Adrian Lux, Pete Tong, and Laid Back Luke perform. 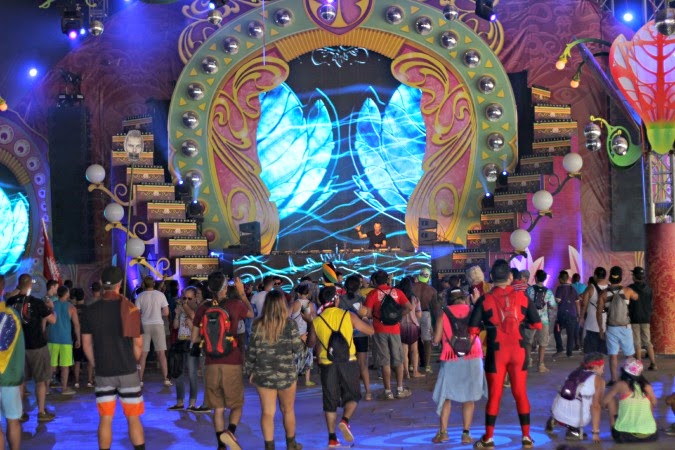 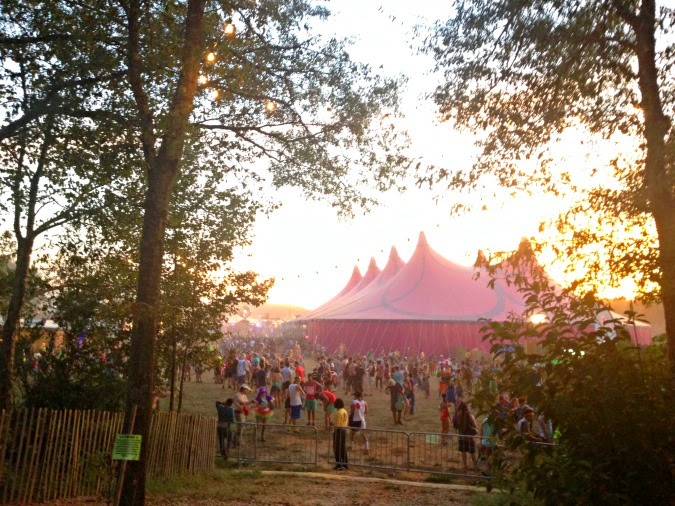 A great place to just hang out was the Bud Light tent. At night the entire space was filled with black lights. 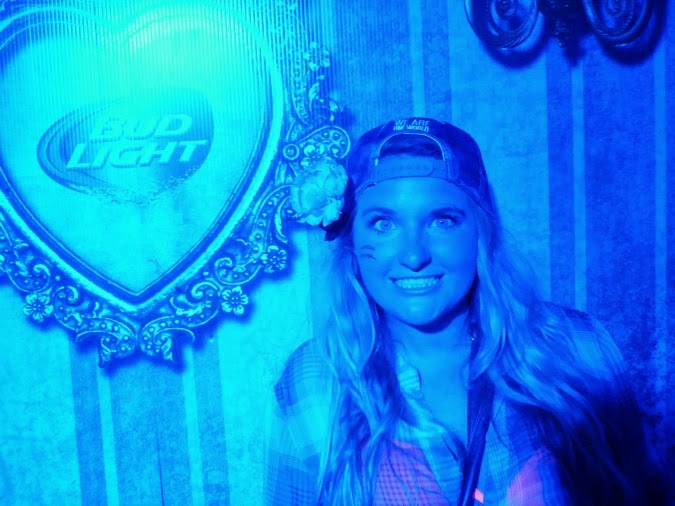 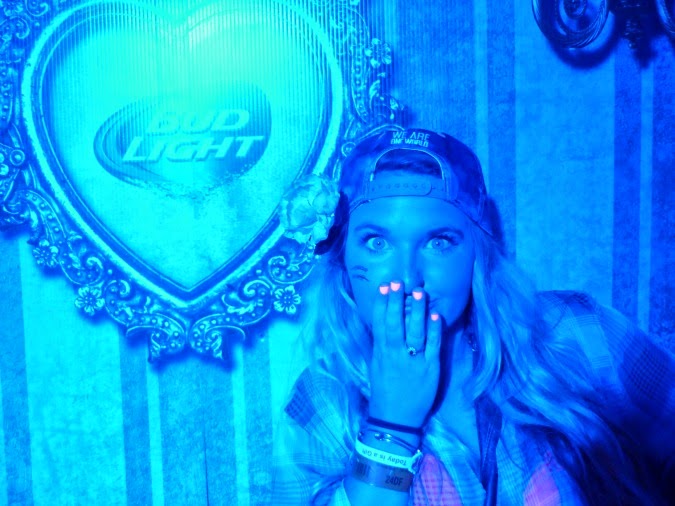 Just walking around is an experience in itself. Colored fountains with the faint (or not so faint) thump of the beat. 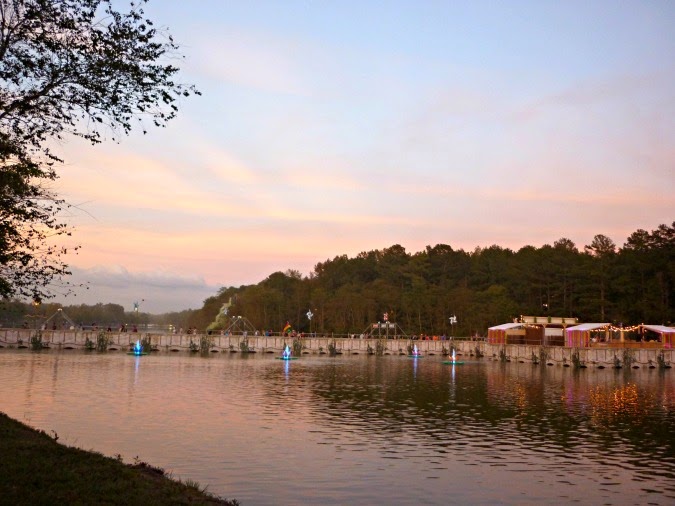 After you cross over the bridge you will find more trance and trap and step into stages such as “It's a Trap” or “Mad Decent” and “All Your Bass Are Belong To Us”.
One of my favorite performances was by Vicetone at Anthem stage. The boys were really getting into it. 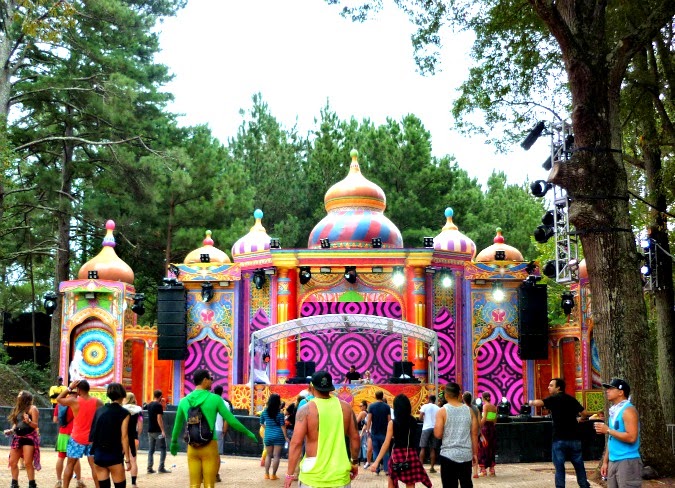 Once you pass a few trees you found the stage of mirrors. This stage was Sarah‘s favorite by far. Here we saw Griz, A-Trak, Diplo, Dillon Francis, Botnek, DVBBS, 3LAU, 3 Are Legend (Steve Aoki with Dimitri Vegas and Like Mike) and Waka Flocka Flame even made an appearance. 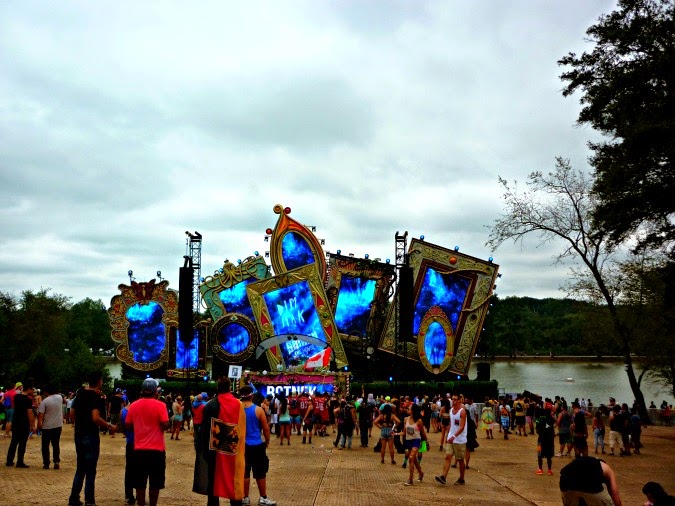 There was even a zip line that went from the stage to a tree on the far right. 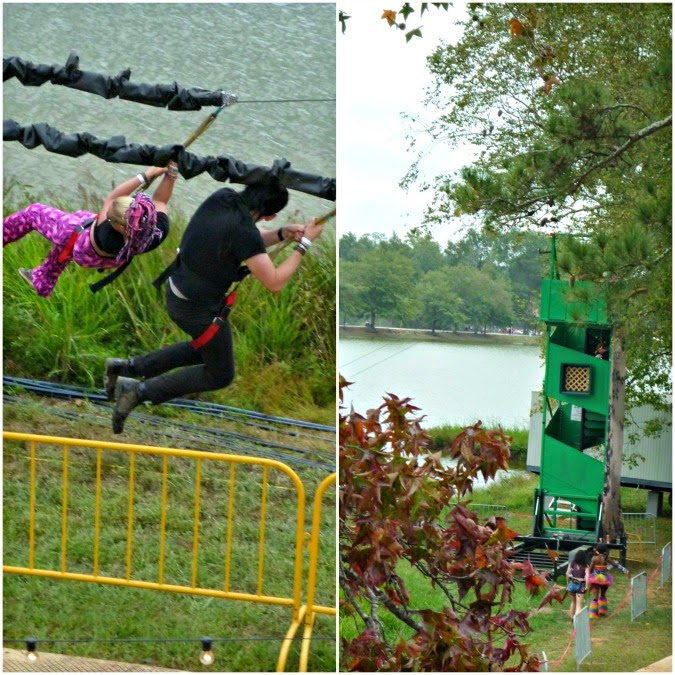 At night the stage way lit up even more with incredible fireworks. 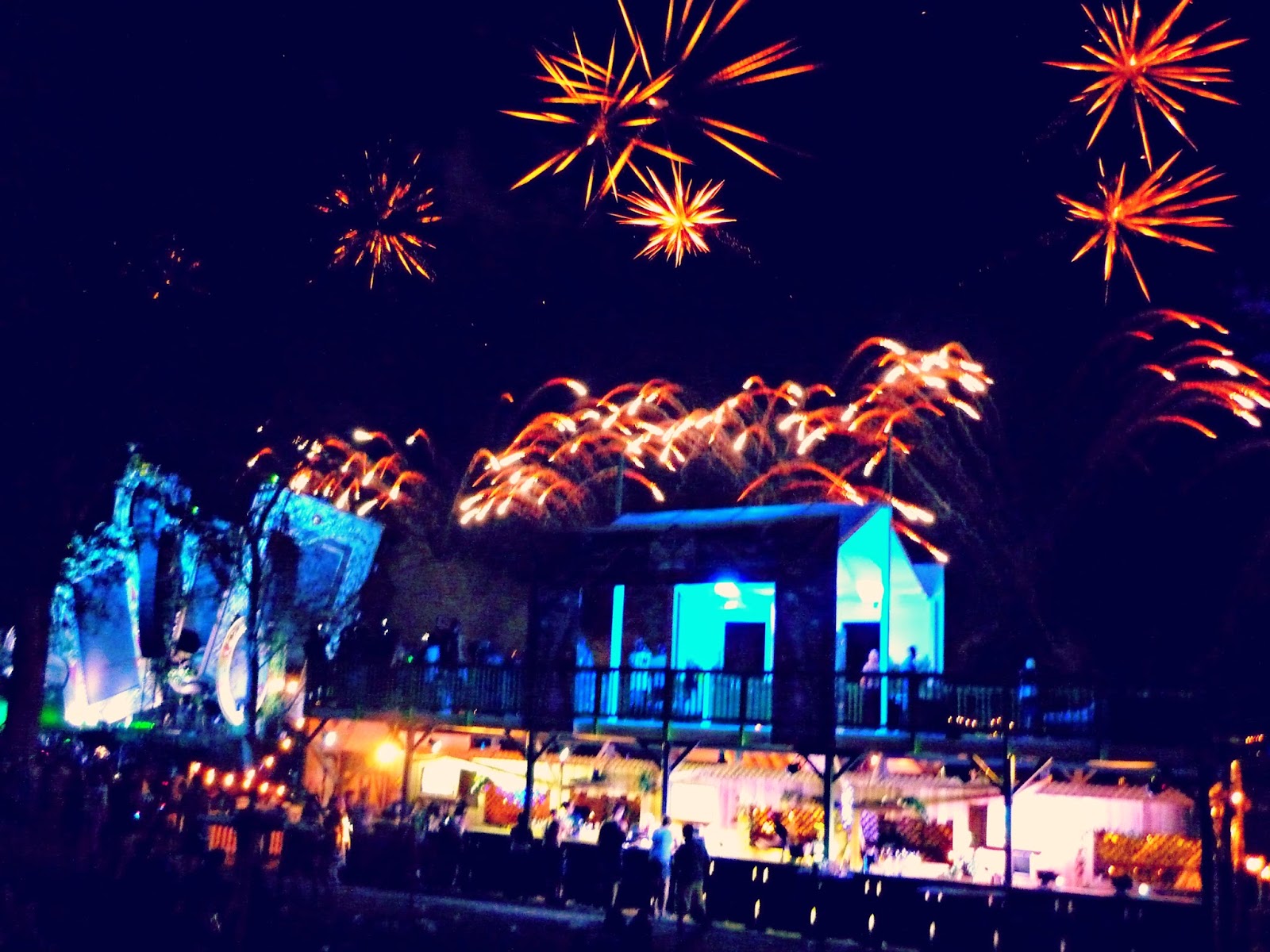 The tent near the stage was one of my favorite performances of the weekend by Sound Remedy on Sunday. 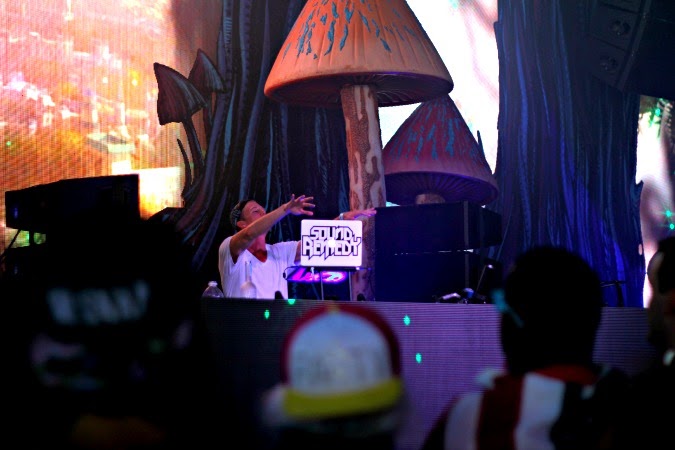 An absolutely amazing set and he could not have been more gracious. 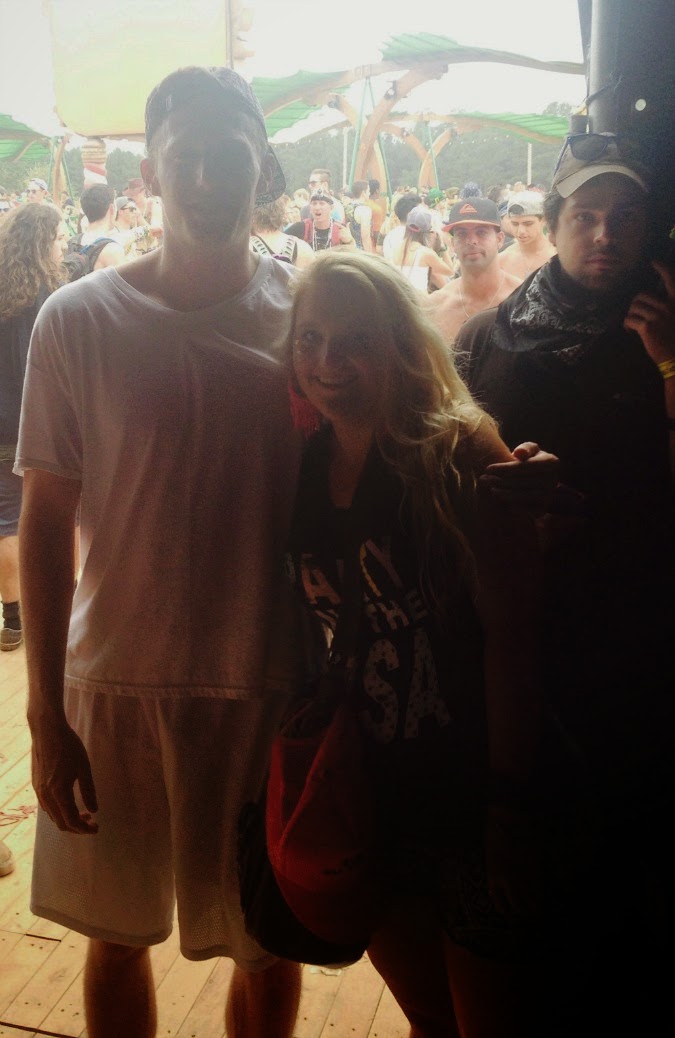 I'm nervous around artists, but Sound Remedy was the coolest guy!

Speaking of artists, let's talk about this guy: 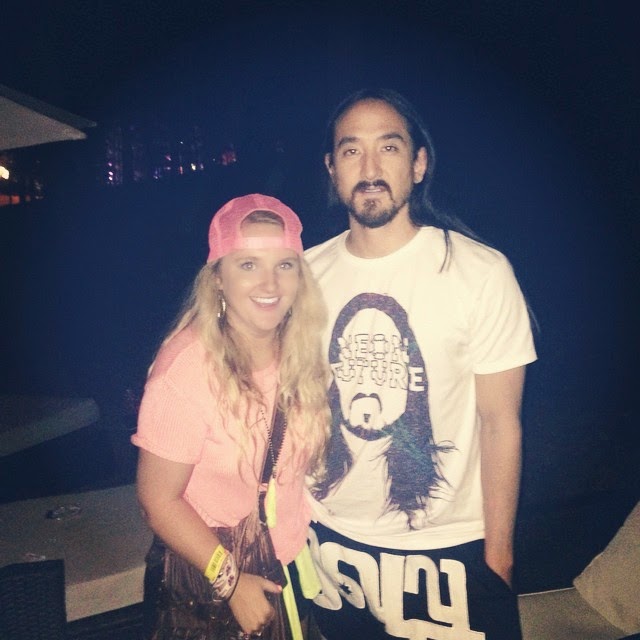 Steve Aoki is arguably one of the biggest EDM artists out right now. His song “Rage The Night Away” with Waka Flocka Flame is huge and his new album “Neon Future 1” is coming out very soon!

Even with 7 stages spread out around acres of land, it was easy to navigate the festival. The only drawback was the line for drinks. But that's bound to happen when 100,000+ people get thirsty. 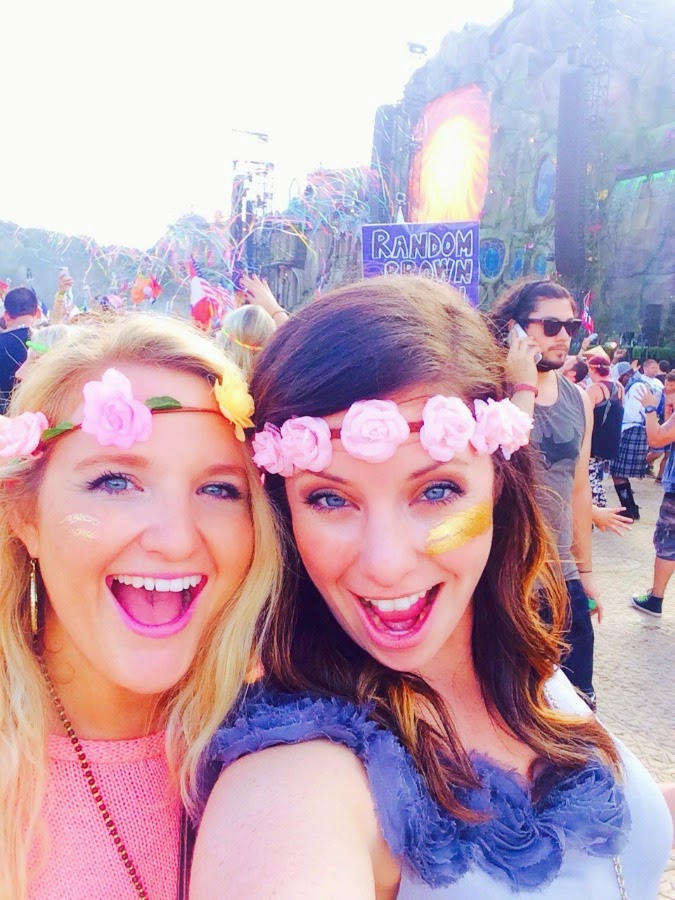 It was also expensive. Food prices seemed to go up this year. A simple slice of pizza would set you back $7 and anything more extravagant (chicken and waffles or cajun Jambalya) was about $12-$17! 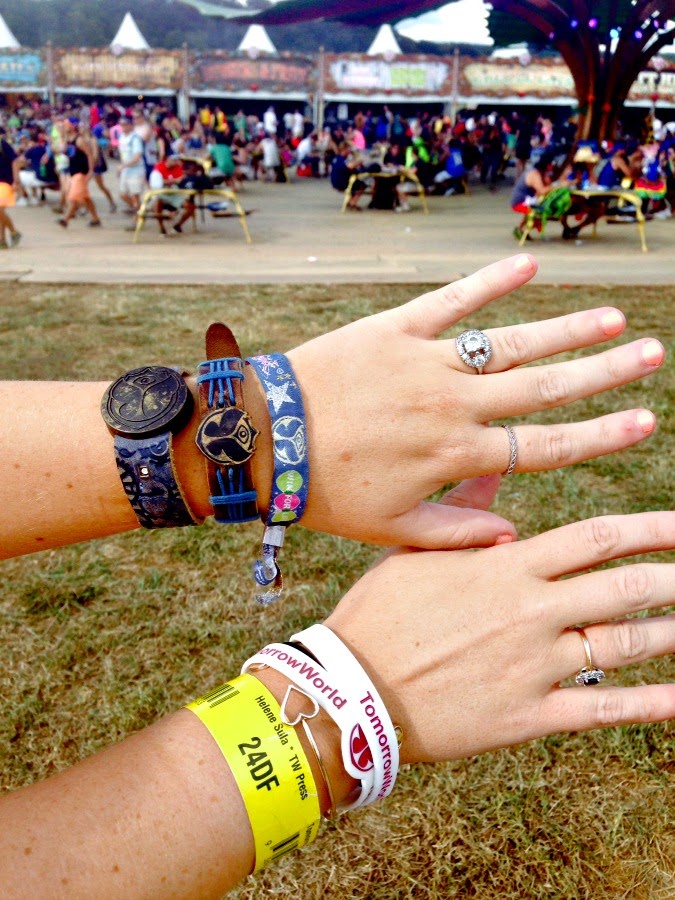 All in all it was an awesome festival and weekend. I just can't believe I've gotten to go year after year. 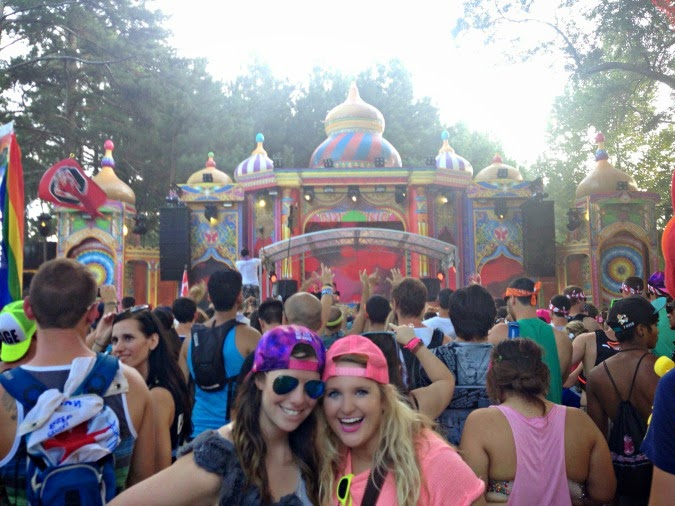 One thing's for sure, I could never be a DJ because I am knocked out from just three days of this- they do this 24/7!
As always: yesterday is history, today is a gift, tomorrow is a mystery! Thanks for the madness TomorrowWorld! 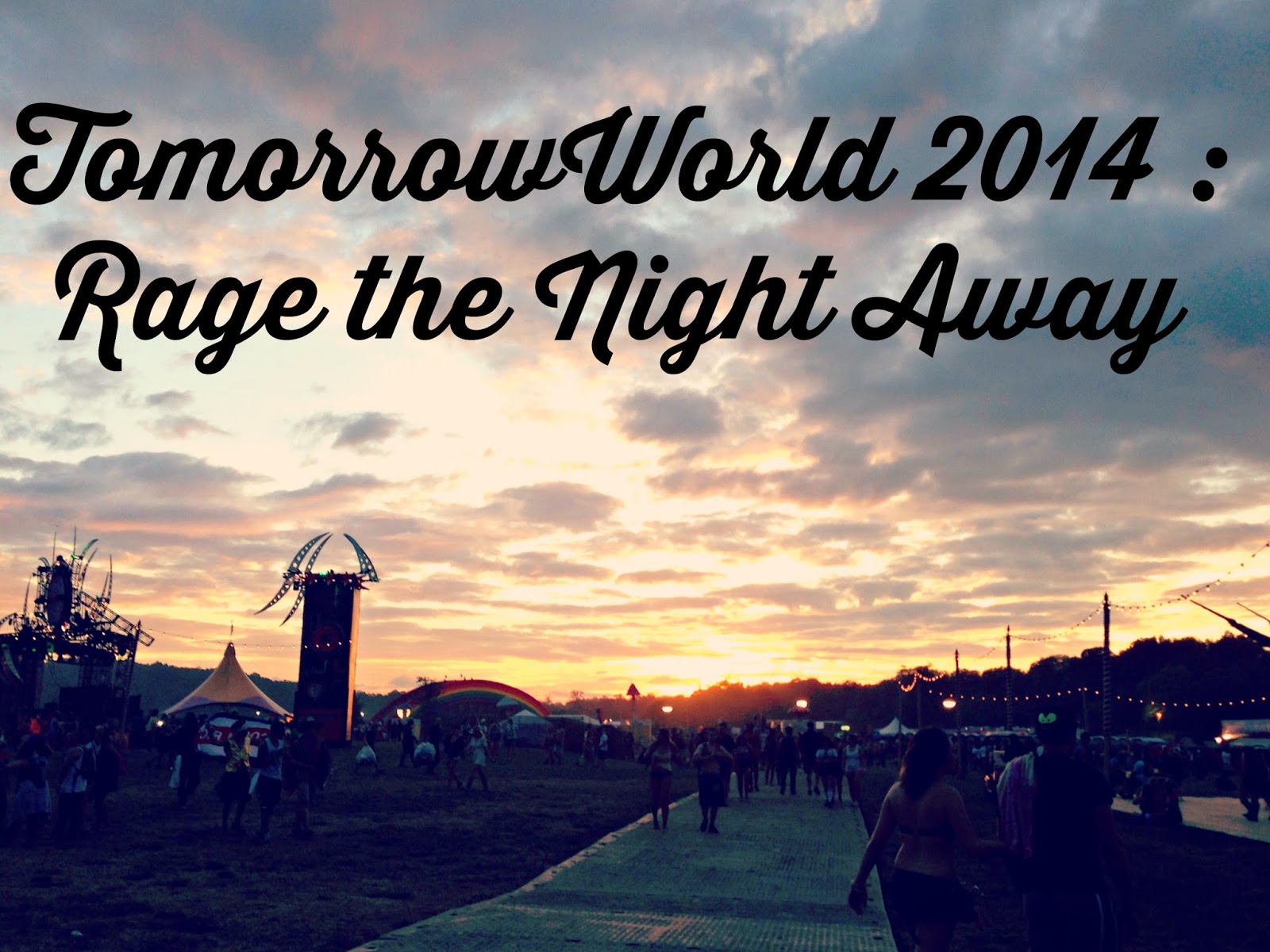 Don't forget tomorrow is the first day of #Blogtober14 with Taylor and I. We are blogging every day for the month of October. There aren't many rules- just have fun! Grab a button and link up! The prompt for tomorrow is “If You Won The Lottery You'd…” and you can find the prompts for the rest of the month here.