I haven't been shopping in a while. When I say that, I'm only half saying it because it's kind of a lie. I just haven't been finding much so I haven't purchased anything lately. However, for the past two weeks, in preparation for Tomorrowland, I have been shopping at least every 3 days. I want need festival outfits. Neon. American flags. Texas. Fun. It's hard when 4th of July just happened and the only thing left is the picked over crop tops and ugly animal print American flags. Who would wear a leopard American flag? Not this girl.

Yesterday was the last day I would go shopping, I told myself. Enough was enough. I had a million other things to do rather than make the animalistic circle of Forever 21 and H&M racks looking for something that just wasn't there. I know I'm being dramatic about clothes, but I can't help it.  You see, I'm going to be in a small documentary about Tomorrowland. To be honest, I'm not sure about all the details but I want to look good. This is also probably my last chance to get in the Tomorrowland “Official Aftermovie” – a Youtube video they make each year after the festival is over and it's watched about 100 million times, no joke.

So I wanted the outfit. The one I would be wearing in the documentary. The one I'd be interviewed and photographed in. The one that would be seen by millions on Youtube.

I had two outfits picked out for the festival that I felt pretty good about. But I needed one more. I went into almost every store in the mall. Even Abercrombie & Fitch (do people go here anymore?). They had a shirt I thought was kinda cool. But it wasn't it. I decided that if I didn't get the shirt, good Karma would be on my side. Something else was sure to turn up.

I was going over to a friend's house for girl's night and needed to leave in 15 minutes. This was my last chance. Feeling defeated, I went into one more store. As soon as I walked in, there it was: American Flag Overalls. They are a little ridiculous, but so is Tomorrowland. 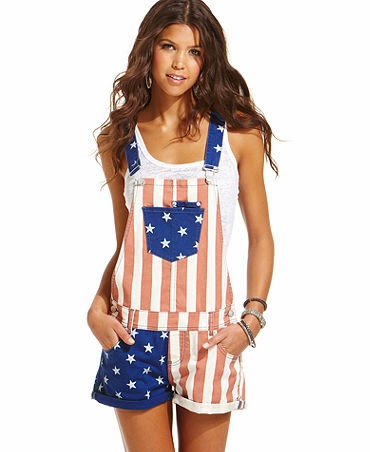 Overalls are from Macy's and can be found here!

But there was a problem. They were a size too small. There's no way these would fit. I asked a store clerk if they had any other size. Nope, these were the last ones.
Well, I decided to try them on anyway. What the hell.
By some miracle of sweet baby Jesus, they fit. (No, I don't look half as good as the model.) I raced up to the cashier, purchased them and they sit inside my backpack, ready to rock and roll. And now, I am ready for Tomorrowland. So out of the 214 countries (that's more than the Olympics) I will be the one wearing these overalls.

That, my friends, is clothes karma.

A quick reminder that Total Social is tomorrow! Sarah and I are talking all about favorites! Favorite picture, favorite pin, favorite festival, favorite recipe, favorite blogger… really you can run wild with this! Full details here. The hashtag is #FavTotalSocial and you can link up your blog, pinterest, Facebook, Instagram, Twitter… heck even Google +!
Grab a button and link on up!