When Real Life Smacks You in The Face

Sometimes you go on vacation, and when you come home, something has changed. Something is just a little off. For us, coming home last night was interesting, to say the least. It seems someone, or somethings, decided to move in.

Our flight home was hectic. We were supposed to leave Tuesday, but when we went to check in for our flight, we saw it was delayed two hours. No big deal, at first. Oh wait, we had a connecting flight in Atlanta, so this would make us miss our flight. Michael spent an hour on the phone (while my sisters and I continued to make Chinese staircase bracelets) to try to find another flight. We were all set to leave at 8.

While we had a few last hours on the beach, we decided to make Pina coladas. But then, an alert came through: our flight was canceled. Since Michael doesn't read this blog, I can be totally honest. I was thrilled. I work remotely, so I figured I could continue working and spend more time with my family. Michael was pissed. He stalked outside to make other plans. I rejoiced and poured myself another drink. I thought of all the fun things we could do tonight. But this post isn't a recap. That's for another day. 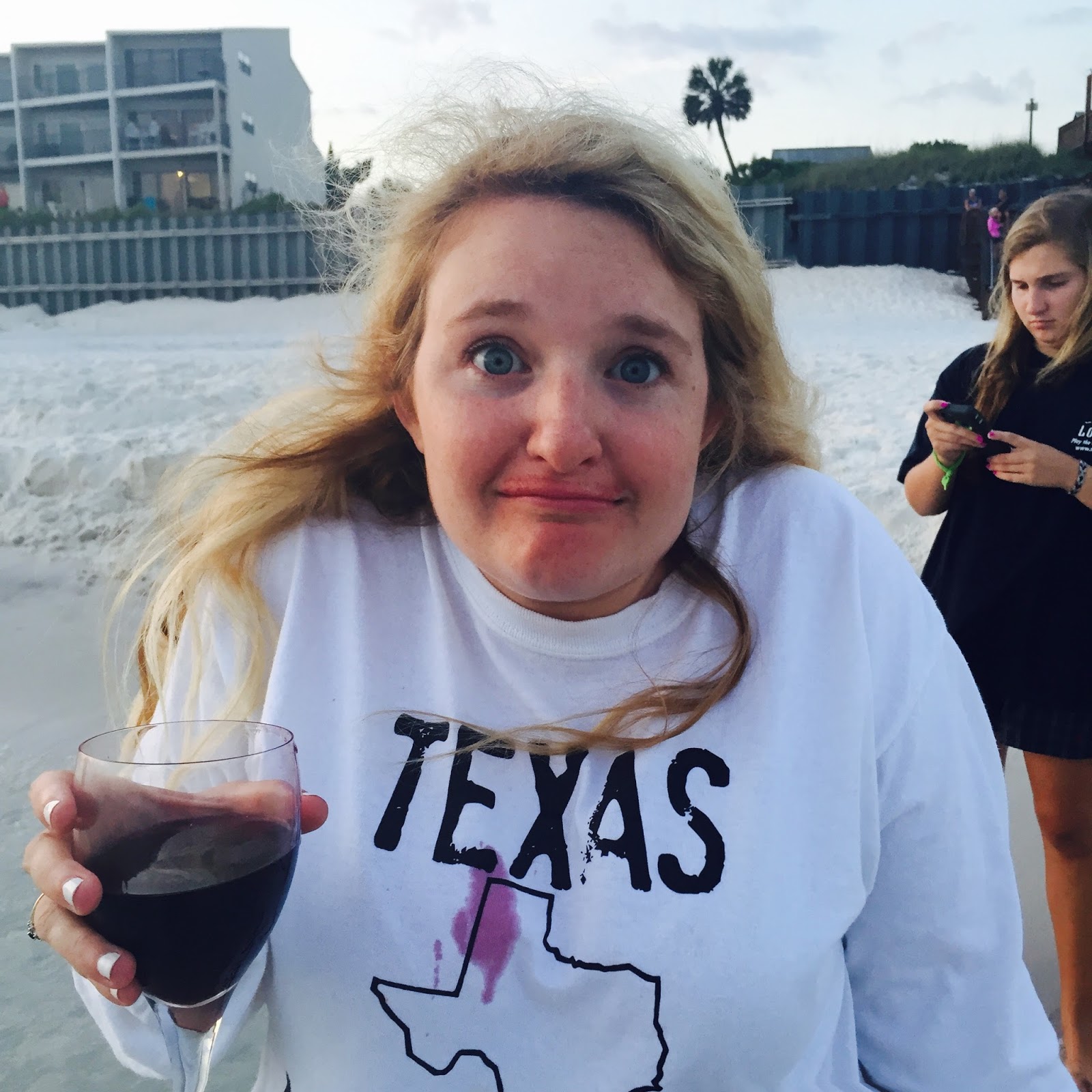 This photo is not the point of this story, but I did spill a good amount of wine on myself while walking on the beach. Hint: do not walk and drink red wine while wearing a white t-shirt. Michael stopped laughing long enough to take this picture.

Michael finally found a flight leaving out the next day at 7am. Two alerts later, we finally boarded the plane at 10:45am. On our connecting flight out of Atlanta, just as we were about to take off, a man complained of chest pains and we had to go back to let him off the plane. 45-minute delay. No big deal, I can continue working on the plane.

After finally getting home, I go straight to our guest bedroom to try and answer some emails and finish any work I might have missed. Michael went outside to feed the dogs. Later on, I took a bathroom break. To my horror there were some black, tiny ants making their way from a small hole near the tub, up to the bathroom closet.

I knew exactly what they were after. This might be a little bit too much information, but here it goes. There's a “sugar” wax that I occasionally use, especially before beach trips. I put it away in a hurry and had a sneaking suspicion it leaked out. I was right.

Opening the bathroom closet door was down right disgusting with ants crawling everywhere. Up the sides of the white wicker basket, into the pool of spilled sugar wax. I screamed bloody murder and Michael went to grab his trusty “Home Defense” spray while I winced in the corner.

But it didn't stop there. After wiping every possible surface and throwing the damn wax away, I went into the garage to put up the Home Defense spray. Good thing I had it in my hand. I opened the garage door, and ants poured- POURED- out of the middle of the garage door.

Again, I screamed. But this time I sprayed them to death and wondered what in the hell was going on.

If you haven't heard yet, it's been raining in Dallas. A lot. Rivers, lakes, and virtually all bodies of water in and around Dallas are flooded. Take a look at this image from Six Flags Over Texas.

We figured the ants were trying to find a way to move to higher, drier ground. So we spent last night stalking around the house looking for more ants. It was a lovely evening. At around 10pm we thought we'd spent enough time awake. I look into the bathroom closet one more time, just to check. Ants.

We stayed up another hour finding the correct hole they were coming through when finally we felt like we killed the jerks. I looked up at Michael, relieved and ready to go to sleep. He looked back at me, smiled, and said, “Helene, there's something on your face.”

I smacked myself probably five times and got the ant off my face. Sometimes, reality doesn't ease you back in, it smacks you right in the face.