The Soundtrack to My Life

The other day I was looking for some old pictures when I came across my long lost iPod. Bright blue, speckled with some scratches here and there, but still holds a charge. That's the thing about the good ol' days- they just don't make them like they used to. 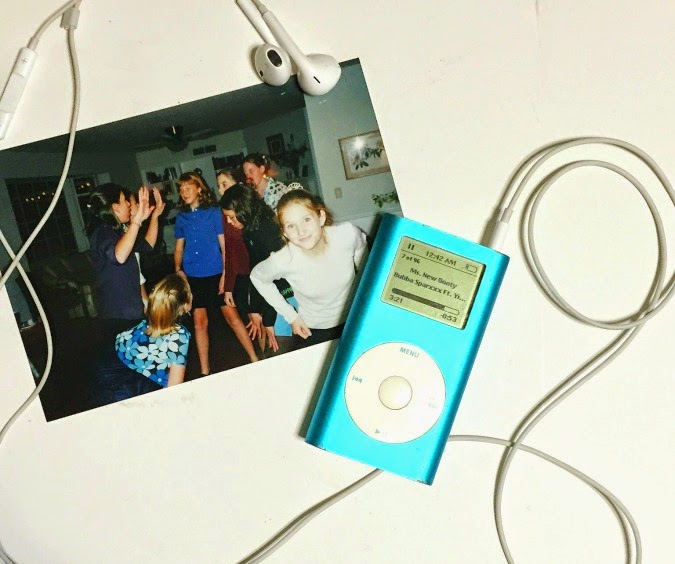 I started scrolling through some of my old playlists and realized that I had some certified jams on there. I came across a playlist titled “summer 08 pt 2” and found Jaheim's “Fabulous” and I realized I should share some of these classics. I went through my old playlists and pulled out some of my most prized songs that were the soundtrack to my life. These aren't necessarily the best songs in the world, or the songs that defined me, but hearing them takes me right back to that time in my life.

I was on the dance team in 7th grade, so any song that I could get down to, I loved. Destiny's Child embodied everything I loved in life. I recorded the “Say My Name” video from MTV on a VHS tape and would watch it over and over again, trying to get the moves down.

8th grade was the time I really started to listening to rap music. My “boyfriend” at the time loved rap and would always tell me which songs to listen to. The song was “Back That Thang Up” by Juvenile with Mannie Fresh and Lil Wayne. Despite the questionable lyrics, it was played at every school dance without fail. During the song after Mannie's verse there's a break in the song, where the record scratches, when a radio station edited to say “Hot 100, Hot 100”, and if you lived in Dallas at that time, you still add in that part to this day.

Back That Ass Up by Juvenile on Grooveshark

I mentioned this song above, but I cannot reiterate how much I loved Jaheim's “Fabulous.” I don't relate to this song in the least, but every time I hear it, I'm transported to laying out in my GUESS blue tropical bathing suit on my black trampoline, my favorite place to get sun in the summer.

Fabulous by Jaheim/Rayne on Grooveshark

My teen years were defined by the lyrical genius that is Nelly. I mean every song he had was a hit. But “Country Grammar” is still my favorite of all time. Summer just isn't the same without hearing this song.

Country Grammar (Hot …) by Nelly on Grooveshark
Nothing says badass like a sophomore in high school (with braces) cruising around town with her girlfriend's listening to Chingy and Snoop Dogg's “Holidae Inn.”
Holidae Inn by Pollie Pop, Chingy, Snoop Dogg & Ludacris on Grooveshark

I matured a lot in a year, and started an obsession with songs that whispered (aka Ying Yang Twins) and yelled at you, Usher with Lil Jon and Ludacris, “Yeah!” and OutKast's “Hey Ya!”

My senior year of high school I had a solo dance and I knew early on what my song would be: Mya “Case of the Ex.” I listened to this song a minimum of 18 times a day. If I had the video of this dance I would show it here, but it's on tape, sadly.

Case Of The Ex by Mýa on Grooveshark

Kanye might make some good music now, but nothing compares to “Gold Digger” with Jamie Foxxx. Sampling old school Ray Charles made me believe rap was definitely not dead.

Can we pause for a moment for T-Pain? I loved him and his auto-tuned jams. “Buy U A Drank” was played in all bars and this was also around the time I was legally allowed to drink alcohol. A coincidence? I think not.

Buy you a drink by T-Pain on Grooveshark

I used to teach dance at a middle school. For some reason, I thought “Drop and Give Me 50” by Mike Jones and Hurricane Chris was an appropriate song for them to dance to. Did I mention this was a Catholic school? Whatever, we broke it DOWN.

Drop and Give Me 50 by Mike Jones feat. Hurricane Chris on Grooveshark

2009 I was graduating from college and thought the world was mine. That's why it was so appropriate that Beyonce's “Diva” was my song.

Diva by Beyoncé on Grooveshark

Looking back reminds me that I need to put all these songs on their own playlist if I ever want to feel nostalgic. And that I listened to a lot of rap. What are some songs that take you back?