Am I Growing Up?

I didn't step foot in a bar this weekend. Despite being completely free. Despite the fact that two different DJ's were playing on two different nights. Does this mean that I've grown up? That I'm too mature for the bar scene?

Friday, Michael and I were standing barefoot in the kitchen, making steak (and chicken for me) lettuce wraps. We looked at each other. “Should we go out?” he asked, eyebrows raised. “I mean, or we could stay here and watch a movie.” I answered and he grinned.
We watched “The Imitation Game” even though I'd already seen it, I insisted I could watch it again. It was that good.
After two glasses of wine it was off to bed.

Saturday we went on a double day to a comedy show in Dallas. We ate dinner first at BJ's and my girlfriend and I proceeded to make inappropriate jokes about deep dish pizza, becasue that's what adults do.

I hadn't seen
standup comedy in years and felt that it was high time I go see someone
in Dallas. Because I read The Daily Tay, I felt like I was looking at
the comedians from a different view. She gives you a kind of behind the
scenes of what goes through her brain before she gets up on stage. I
found myself paying attention more to what they were doing off stage and the
nuances between the comedians.
We went to Addison Improv a few minutes North of Dallas and were there to see Jon Reep. I've heard of him before and Michael thought he
was really funny. We were told we needed to put away our cell phones, so naturally, we took a picture. Out of the two we took this one was the most normal. 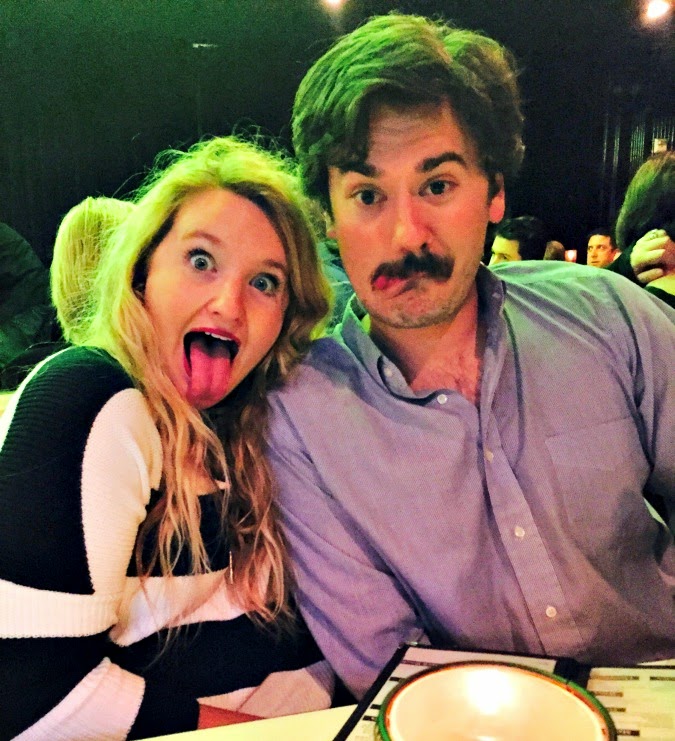 The host was a guy name I watch is Asher. He got on stage I saw him take the mic,
his hands trembling a bit when he spoke. He was really funny and I made
it a point that when I laughed, I laughed audibly. Next up was a guy from Africa who's impressions of people in America were spot on. Then it was time for Jon Reep. He was hilarious. I laughed so hard at one point I kicked the waiter in front of me.

After the show we parted ways and Michael and I got in the car. “Should we go out?” He asked. “No, let's sleep,” I answered, having already taken off my shoes in the passenger seat.

Maybe we are finally growing up. But I don't think it has anything to do with whether we go to the bar or not. It's that we have the option and we can choose. We happened to prioritize sleep over partying. But sometimes, we might choose the other way around. And we can. Because that's what being an adult is all about. At least to me.