My Most Embarrssing Moment – #Blogtober14 Day 29 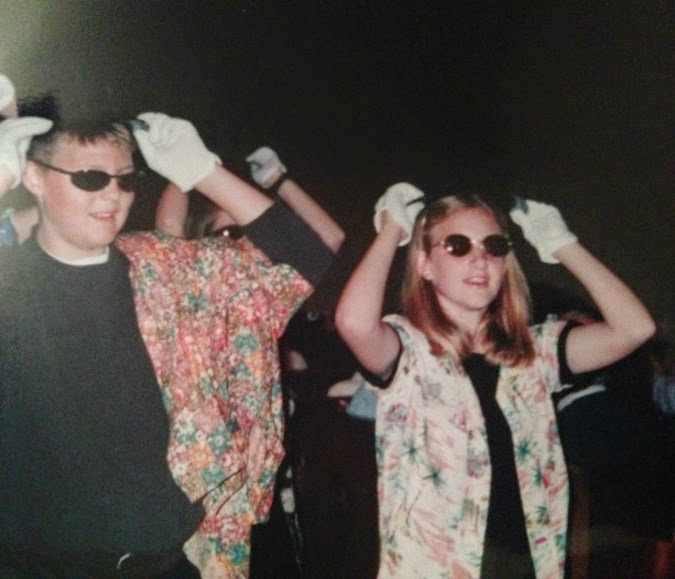 In the 8th grade I had the confidence most 21-year-olds have on their birthday after 5 buttery nipple shots. Despite my slightly crooked teeth, (that would later be fixed by braces that I would wear until November, senior year of high school) my dishwater dull blonde hair, and the height of a 5th grader; I was fairly self assured. This mainly came from my theater teachers who praised my undying love for singing show tunes and acting timid as the lead role in Cinderella.
I went to a Catholic school and every Friday we went to All School Mass. I looked forward to the hour away from class and would situate myself near my best friend and slightly behind the pimply faced boy I had a crush on, so I could day dream about him as we spoke-sang the Our Father. But towards the end of 8th grade, all theater kids were to audition to perform in the end-of-the-year performance at church. We would be congratulating our priest for winning the NCEA award. What that was for, I'll never know. But I knew the entire school, parents, and even the bishop were invited to attend, and it was my time to shine.
I auditioned, and along with 7 other 8th graders, made the cut. I rehearsed after school for weeks before the performance. I practiced my kicks in the mirror at home. The day of the performance I wasn't nervous- just ready to win the hearts of all those around me. Maybe I can get a gig out of this, skip high school, and move right on to the Disney channel or Nickelodeon. I'll pick up a steady drinking habit along the way, if necessary.

The audience hushed as the piano teacher struck the first note. We walked down the aisle of the church. Top hat cocked, we began to sing the words “NCEA” to the tune of YMCA. Classic.
I looked out into the audience with a surge of adrenaline. The kick line started, but I was in my own world. Front and center, I continued on with the song, though this was the musical break. The piano teacher was so thrown off by my singing that she stopped playing and the crumpled noise of the piano ceased as wide eyes gazed over me. Then I noticed- I was still singing.
After a beat, I stepped forward, removed my black top hat and took a bow. I scooted back in the kick line and nodded at the piano teacher to begin again.
After the performance was finally over, I hid from the crowd in the choir room behind the altar. The priest and award winner found me and seeing my red, tear-streaked face said, “Well, you got what you wanted.” I looked up, puzzled and dismayed. “Honey, you stole the show.”
I wiped my tears, put back on the top hat and walked out with my head held high.
Every time I make a scene, I remember, at least I'm the star of the show.

Tomorrow's Prompt: Facts About You
Click HERE for all the prompts for #Blogtober14!

about me blogging link up
0
35
HIBsula