25 Signs You Went To Ursuline Academy

With the school year coming to a close, I'm feeling nostalgic. I graduated from college 5 years ago  (yikes) but I still reminisce about my high school days. My alma mater, Ursuline Academy of Dallas, holds some of my favorite memories. Oh the good old days. Here are 25 signs you went to Ursuline.

1. You're still friends with the same group of people from highschool. In fact, your group actually just got bigger.

2. You've dated a few Jesuit boys. You might even have married one. You still refer to Jesuit as The Daycare, and rightly so.

3. You often tell people you went to Ursuline before telling them which college you attended.

5. If you hung around Cistercian guys, you were probably on their cheerleading squad and found many of them socially awkward.

6. You know “The Cave” refered to the place to take your laptop to get fixed. Which generally happened about 4 times a month.

7. We're far superior than the girls at that other all girl's school.

8. You remember how many times you won at various intramurals. Your grade was always the best and came up with the most creative themes. 10. You miss the days of literally rolling out of bed and throwing on a uniform (sans makeup).

12. Sometimes you write “Honorbound” on the top of your paper.

13. You went to Bear Necessities just to buy some mints.

14. You tell people how some courses at Ursuline were harder than the ones in college.

15. Your campus was prettier than most colleges. And you're picturing the statue of Jesus with his arms open right now.

16. Father Deeves was the greatest ever.

17. You know how to procrastinate and still pull off A+ work.

18. People look shocked when you tell them you went to an all-girls Catholic school, and liked it.

19. If someone says “Ursuline Academy” you immediately think “in our hearts you'll always be.”

20. You know all the stories about Ursuline being haunted. You remember the story about the ghost of a nun showing up in one of the graduation photos from 1900s. And you know where your class picture hangs in the halls.

21. You have left your legs unshaved for months at a time and you're proud of that.

22. You know the true meaning of serviam and miss the days of leaving school early to go do “community service.”

23. You remember crying at Senior Retreat after you read the letter you wrote yourself from Freshman year.

24. You've gotten an infraction for not wearing your blazer.

25. You know that Ursuline may have been tough but it was still the best high school experience possible.

Class of '05 for life!! (PS: Our mural for intramurals won every year.)

What's a sign you went to Ursuline? Or from your highschool? 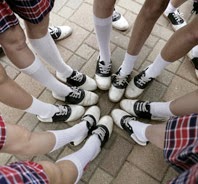