At Least I’m Not That Guy

This morning was rough with a capital R. I woke up with horrible allergies which, for me, means reddish blue bags under my eyes and an inability to breathe. I also think my cheeks look swollen, but that could also be from the 5 pounds of cheese I ate at fondue last night. I spent a solid hour in traffic this morning and decided to get a sugar free vanilla iced coffee from McDonald's. But they gave me the carmel one instead, which I spilled on my black leggings. As I sipped my sugary drink, cursed, and complained I thought, it's really not all that bad. It could be a lot worse.

So this week I thought we could all use a little cheering up, at least I'm not that guy:
At least I'm not Justin Bieber. The Biebs was arrested this morning for DUI and drag racing. He was at a night club last night and got in his Lamborghini and raced in a residential neighborhood. The cops were called and not only did he resist arrest, he also failed the sobriety test. Looks like there'll be One Less Lonely Girl, in jail.
Here's his mugshot: 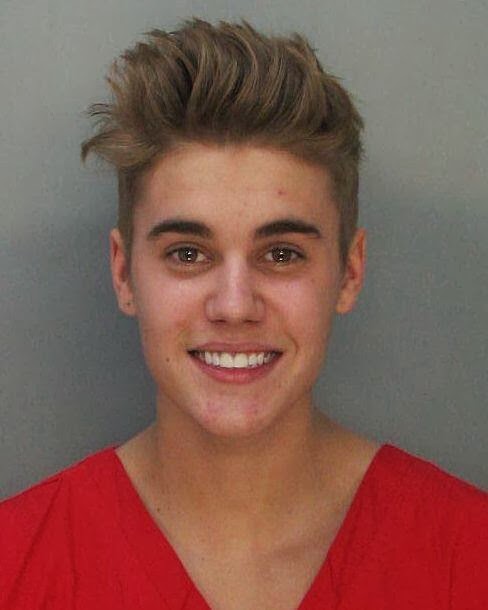 At least I'm not in the boy band The Wanted. The group has decided to take a break to pursue personal endeavors. But no one could hear them over the screaming One Direction fans.

At least I'm not the weather man. A new weather man is in town and it's Drake. If you go to DrakeWeather.com it will not only tell you the current conditions in your area, but the image will change depending on where you live. I don't know why, but this is hilariously awesome to me.

At least I'm not in middle school anymore. It's reported that kids are crushing up smarties and snorting them through their nose. If this doesn't sound bad enough, this can cause cuts in your nose and the left over sugar can lead to maggots. Just in time for Valentine's day.

At least I'm not the Oakland Raiders. They are being sued by their own cheerleaders, the Raiderettes. They are suing because they feel they received unfair wages, withhold payment until the end of the season and unfair employment practices.  Thanks for giving me the heads up on this one Sarah!

See, don't you feel better about yourself now?