And They Call It Puppy Love

I'm such a tease.
If you follow me on Instagram then you saw that I posted a picture of the cutest puppy ever (this is a fact). I hinted that maybe we would be getting this dog. To continue the tease, let me give you some back story. 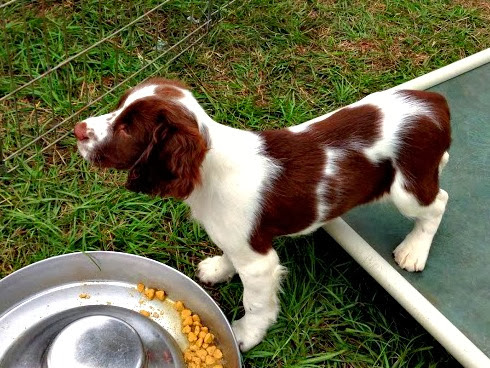 Michael and I decided a few months ago that Hugo (our 3 and half year old doberman) needed a sister. I grew up with English Springer Spaniels and was set on getting another one. Michael agreed, but wanted to get a “field bred” springer, meaning one that could he could go bird hunting with.
Mind you, Michael has never gone bird hunting in his life and the time and dedication it would take to train a dog to do this would be expensive and time consuming.
But I'll go with it.

Michael is obsessed with dogs. Oh, you too? No. Not as obsessed as Michael. He wasn't allowed to have a dog growing up, so he became obsessed with researching dogs. He can pick out any dog and determine the breed. The only time I've seen him get teary eyed is when he talks about dogs. And mention that Hugo will one day pass on to dog heaven and Michael will leave the room to compose himself, it's so upsetting to him.

The point of all of this is, before we can get a dog we can't just go pick them out. He has to research it. FOR MONTHS. This is where this past Saturday comes in. Michael has been researching where to find the perfect English Springer Spaniel. But we are difficult. We want a dog that's a little older, with some training. We got Hugo when he was a year and a half and it was the best thing ever. We both work full time and just won't have the time to dedicate to training. Even though I desperately would love a puppy.
So, in his research he found a man that raises English Springer Spaniels and has a club that holds field dog trials. Michael dragged me two and half hours outside of Dallas, to Huntsville, for a Bird Dog Trial. Not only would we be watching the dogs work, we would be working. We would be shagging dead birds.

At first I was horrified. But it turned out to be pretty fun (God, I hate when I'm wrong.)
This was the real deal, with judges and everything. Basically, we walked through tall grass and muddy terrain as the dogs sniff out pheasant. Then as the bird starts flying the gun team shoots the bird down and then the dog has to retrieve it, bring it to it's owner and then the judge puts it in a basket on my back, or as they call it “shagging the birds.” 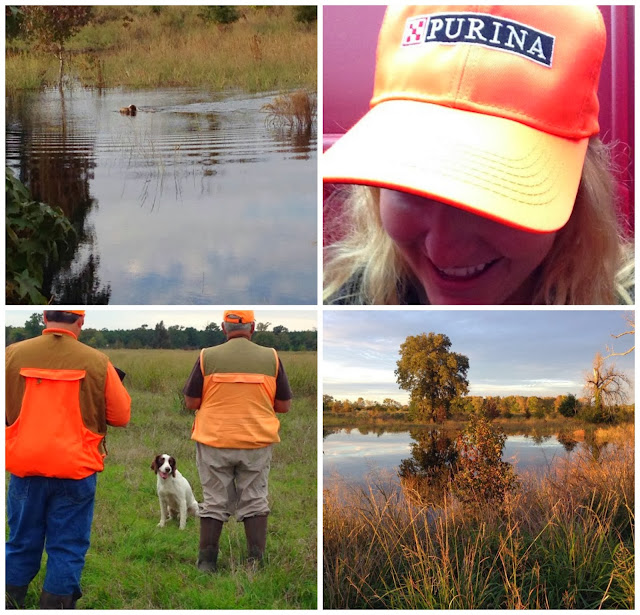 Everyone has to wear orange. Don't ask me why, I was too busy playing with the dogs. It's hard to tell but the picture in the top left is a dog who made a water retrieval.

It was amazing to see these dogs work and know to move left or just from the sound of a whistle, or if the owner moves his hand or even from a look in the eye.

So very long story short, we did not get the puppy. But we are looking at getting a sister for Hugo very very soon. I don't have kids so this is like having a child for me. That's normal, right?

But I really would have been just fine with taking home that puppy. The Ultimate Guide to Traveling with Dogs