Mantervention: The Ultimate Way To Recover From A Breakup

This is a sponsored post written by me on behalf of Mantervention for IZEA. All opinions are 100% mine.


This weekend I'm going to experience the whole “College” scene again. A bunch of Michael's and I's friends are in town. They are here for a football game, Texas A&M takes on SMU in Dallas. We have some very college like outings planned: Friday- a beer fest (aka Oktoberfest in Addison), Saturday -tailgaiting (or boulevarding is how it's done at SMU), followed by an EDM concert at the Palladium ballroom in Dallas to see Porter Robinson. Since we would be surrounded by College kids, it was time to get in the right mode.

So we watched a new feature length comedy film called “Mantervention.” If the title doesn't get you alone, the plot is hilarious. It's about a guy trying to get over heartbreak, his buddy starts a mantervention and figures the best way to get over chicks is to sleep with as many as possible. Well, according to the man formula, he has to sleep with 12 and half girls.

What happens is pretty hilarious. One of my favorite scenes is in the bar, where Spencer (heartbroken) and Coke (heartbreaker) are working the bar. The DJ is playing great EDM music and Spencer is feeling on top of the world. The music in the movie is on point! He really doesn't know much about making drinks, so he keeps making every girl a Bay Breeze! 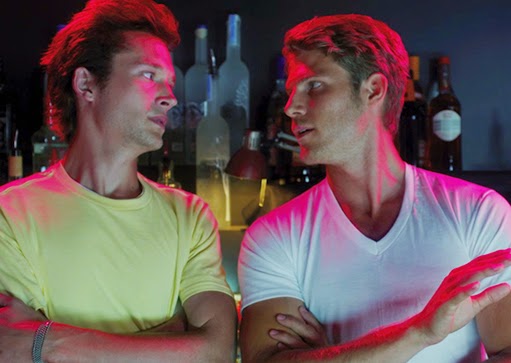 As the plot thickens, you wonder is he hooking up with girls going to solve the problem? Then there's a problem. He starts falling for an actual cool, down-to-earth girl, named Katie. Can Spencer get over his heartbreak? Will Coke ever find the right girl? (also, guys will love this movie, there are real UFC fighters in the movie!)

I rented the movie on iTunes but you can also find it on VOD, Vimeo, and Vudu. For more info (and pictures of Travis Van Winkle's abs) check out Mantervention on Facebook, Twitter, and Instagram.

Check out the trailer below, tell me who you think is cuter (Spencer or Coke!) for your chance to win a signed copy of the DVD!:

Check out all the VOD and release details!