You already know. If this has you singing Iggy Azalea's “Fancy” then we are clearly on the same page. Yesterday the world watched as America lost in extra time to Belgium in the World Cup. How did we respond? Sure some of us teared up. Some of us were left feeling hopeless. But the majority of the response was, “Whatever, we're better anyway.” 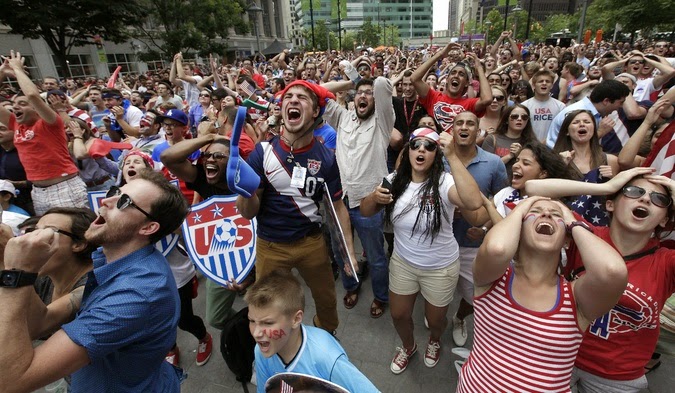 I'm not sure any other country would have the same reaction. Across the internet and social media were responses like this:

The caption read: “3 years and 340-something days until anyone in the United States cares about soccer again”

It doesn't matter that this has absolutely nothing to do with soccer:

Seems like they're kinda ungrateful for the Marshall Plan if you ask me. #USA #USAvsBEL
— Kyle Clark (@KyleClark) July 1, 2014

There were food fights:

Sad that I won't be eating waffles ever again. You did this Belgium!!! #FreedomWaffles #USAforever #1N1T #USMNT
— Nathaniel Donley (@nathanieldonley) July 1, 2014

I'll still eat waffles, but from now on I'm putting bacon, ketchup, BBQ sauce, and extra freedom on every one I eat.
— Mig Greengard (@chessninja) July 1, 2014


I'm not really sure whether this is the right or wrong way to handle the loss, but I can't help but laugh and also, participate in the sentiment. No, I'm not a huge soccer fan, but I found myself chanting “We Believe” and throwing on my favorite red, white and blue rhinestone visor. Whether we win or lose in America, we always see the bright side. And we learned that Tim Howard is our new favorite human.

How many saves until we replace George Washington with Tim Howard on the $1 bill?
— Wesley Lowery (@WesleyLowery) July 1, 2014

So thanks for reminding us care about Soccer. I believe! Yellowstone Itinerary: Plan for 1 to 5 Days