Today I'm joining Taylor and turning back the clock to check on middle school me. Tay and I are discussing fooling around, 8th grade style, with a glimpse at our diaries. Apparently, we had very differing opinions on the matter. 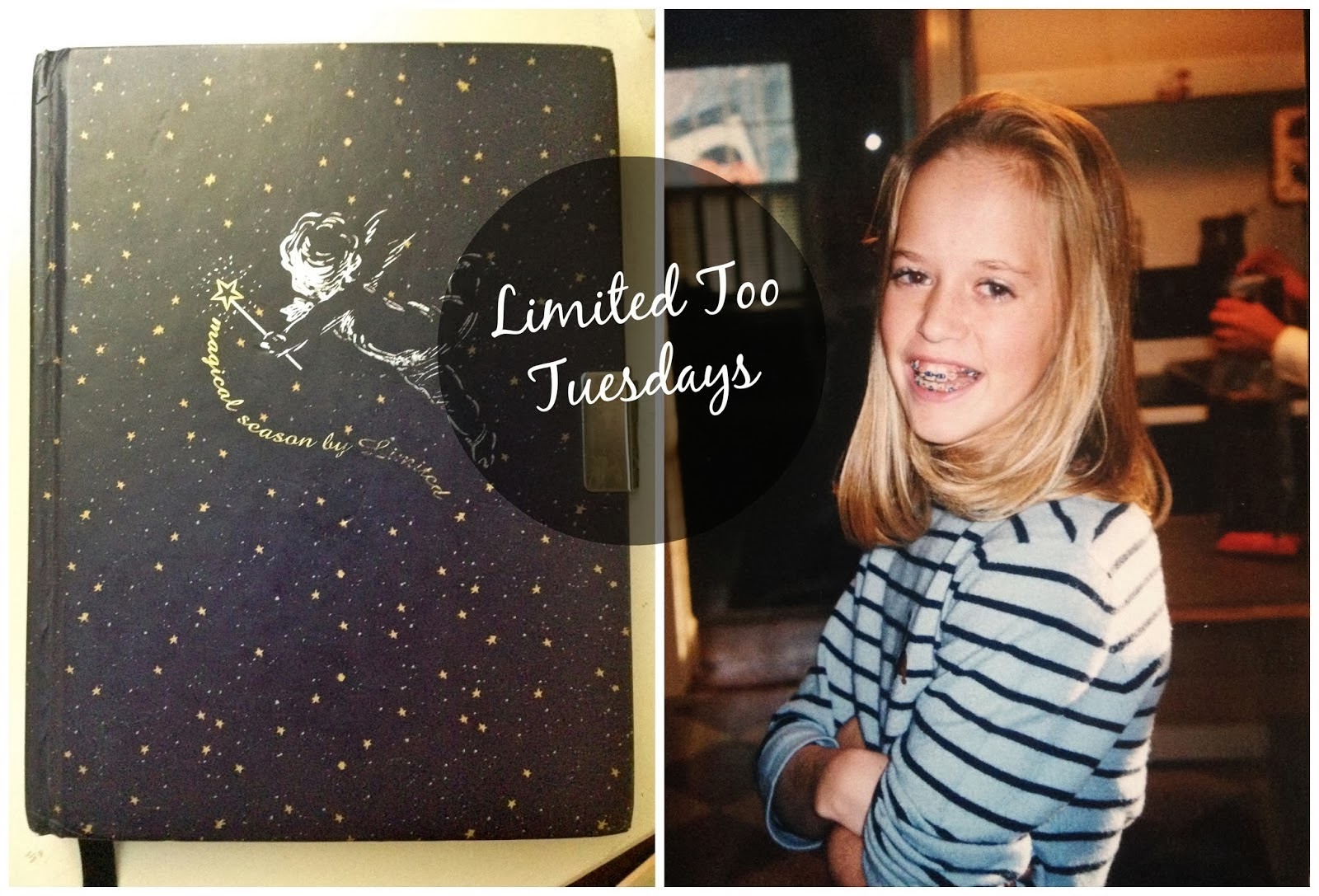 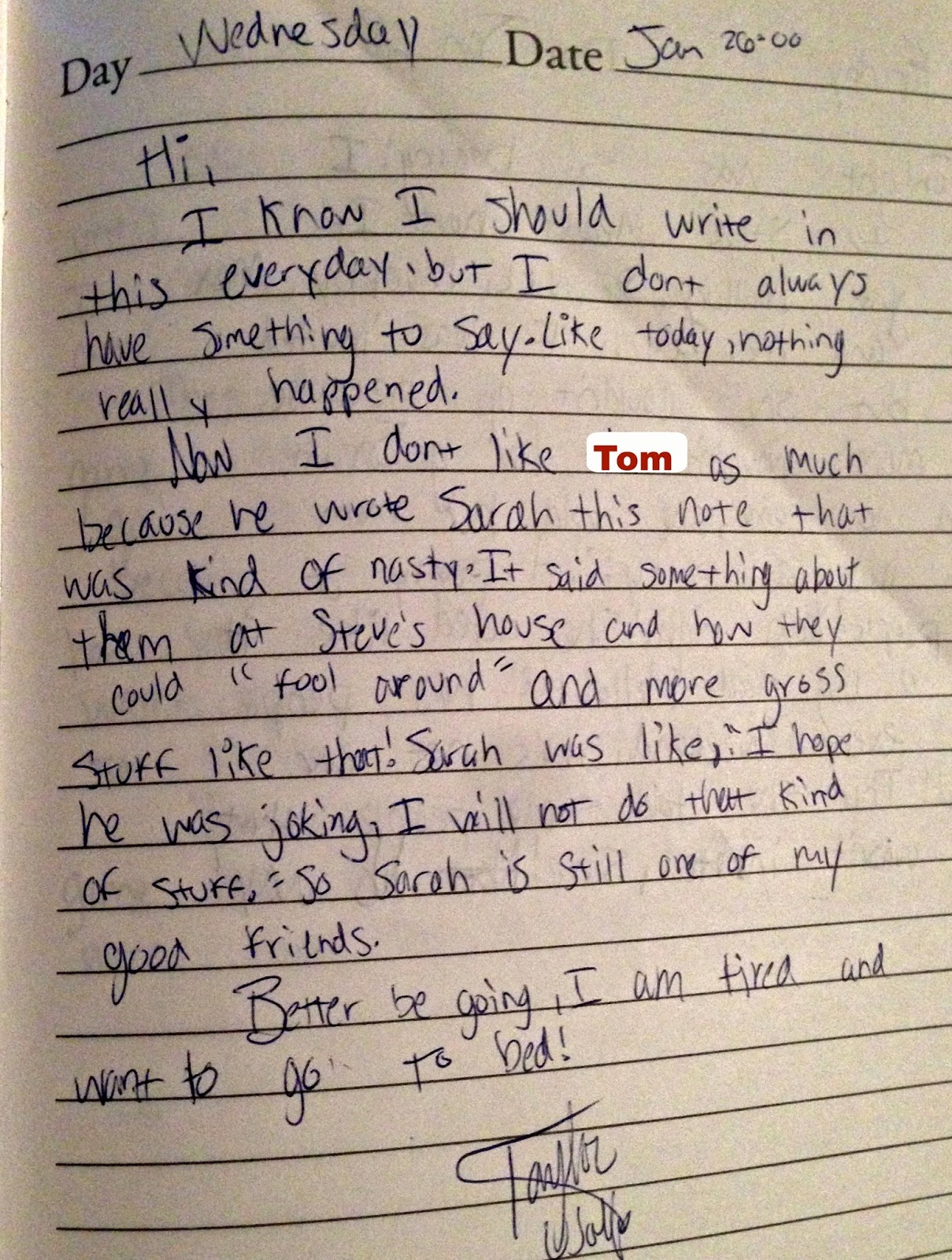 I think I need to work the word “nasty” back into my vocab in 2014. That's just one of those words that really packs a punch, don't you think?

The funny thing is I actually remember this note. And I know for a fact it didn't get any nastier than the “fooling around” part, and that was the actual phrase “Tom” used. What kind of middle schooler (not from the 1950s) says fooling around, anyway? So you kids wanna fool around, do ya? Just for the record that was intended to be read in that weird fast tone old movie stars used to speak in…

Well anyway, thank God Sarah reassured me she wouldn't “do that kind of stuff” or I would have had to drop her as a friend right then and there. And Sarah is one of those friends I met the day I was born and still continue to be friends with to this day- but only because she “didn't do that kind of stuff.” Are you guys starting to catch on to what a crazy little Judge Judy I used to be? Don't get me started on the day I found out my sister drank alcohol- in high school!!! I almost called the police myself.

But let's take a look at middle school Helene, shall we?

Looking at old diary entries is hilarious and awesome and really, speaks to your character today. JK. I'm nothing like my dairy was back then. At least, I hope not. In 8th grade you could say I was a bit of a slut. No one would say that because all I ever did was make out. But reading this diary entry you could see that I liked to make out a lot. In 8th grade I liked boys. Like, really liked boys. I mean, clearly I was cool, I was on the dance team: 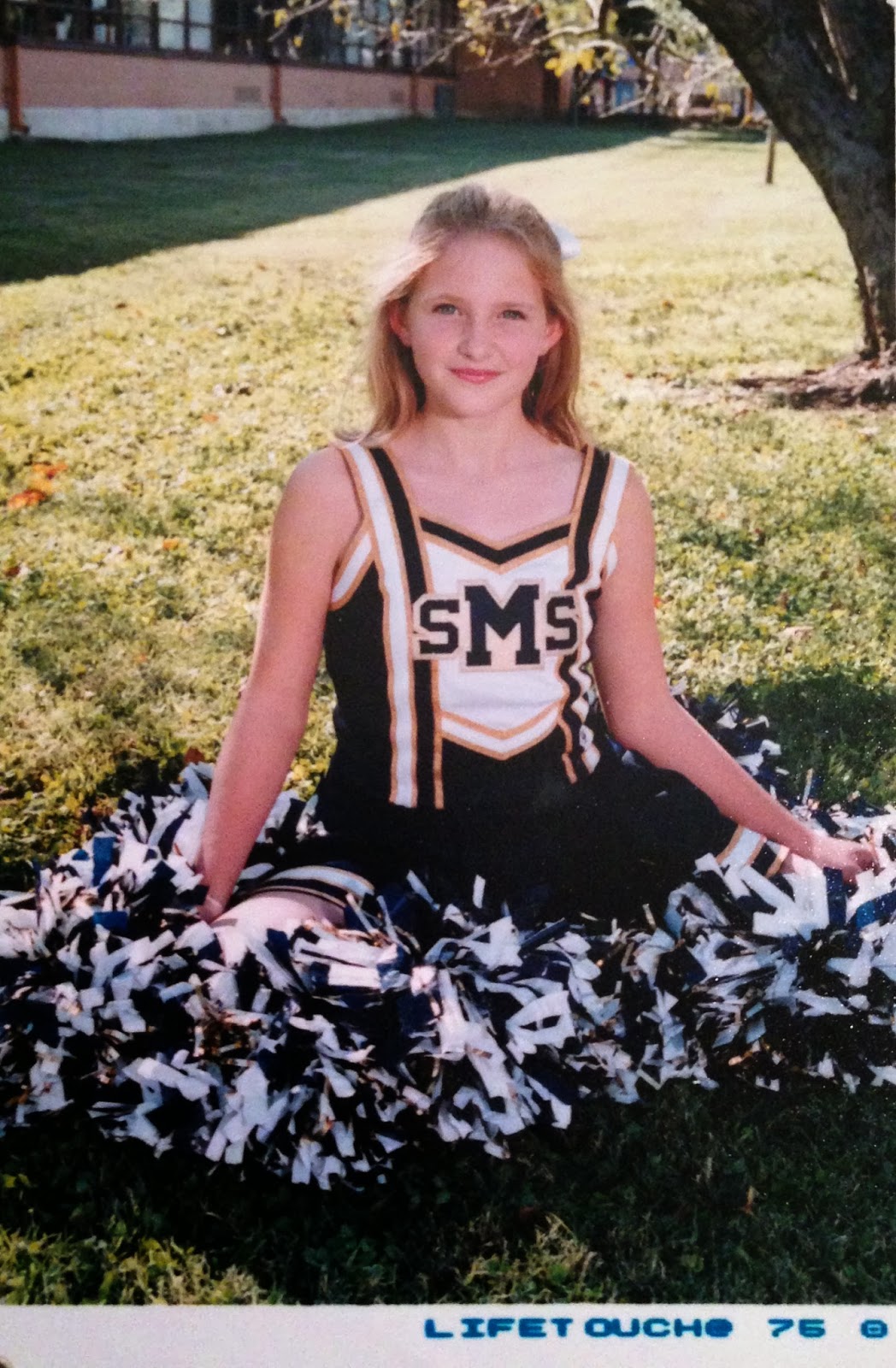 But let me point out, this was a professionally done photo. This is what I typically looked like when going out on the town, err, the mall in which my mom dropped me off. 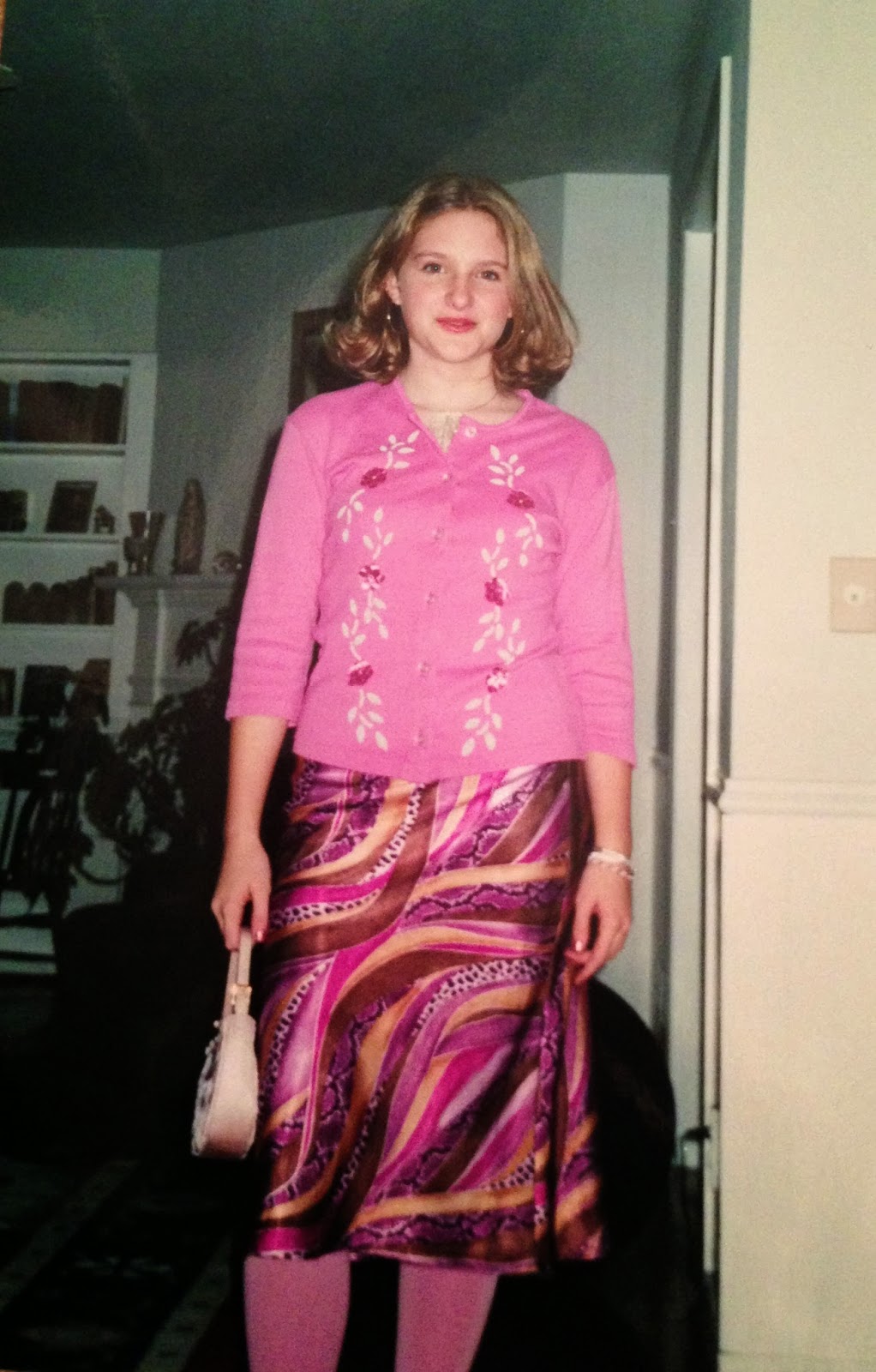 I wore this outfit to a dance. I thought this mess looked good. Pink everything. So with this person in mind, we can get into my diary entry. Names have been changed since I don't want them to feel embarrassed. Although I highly doubt he's reading this blog. 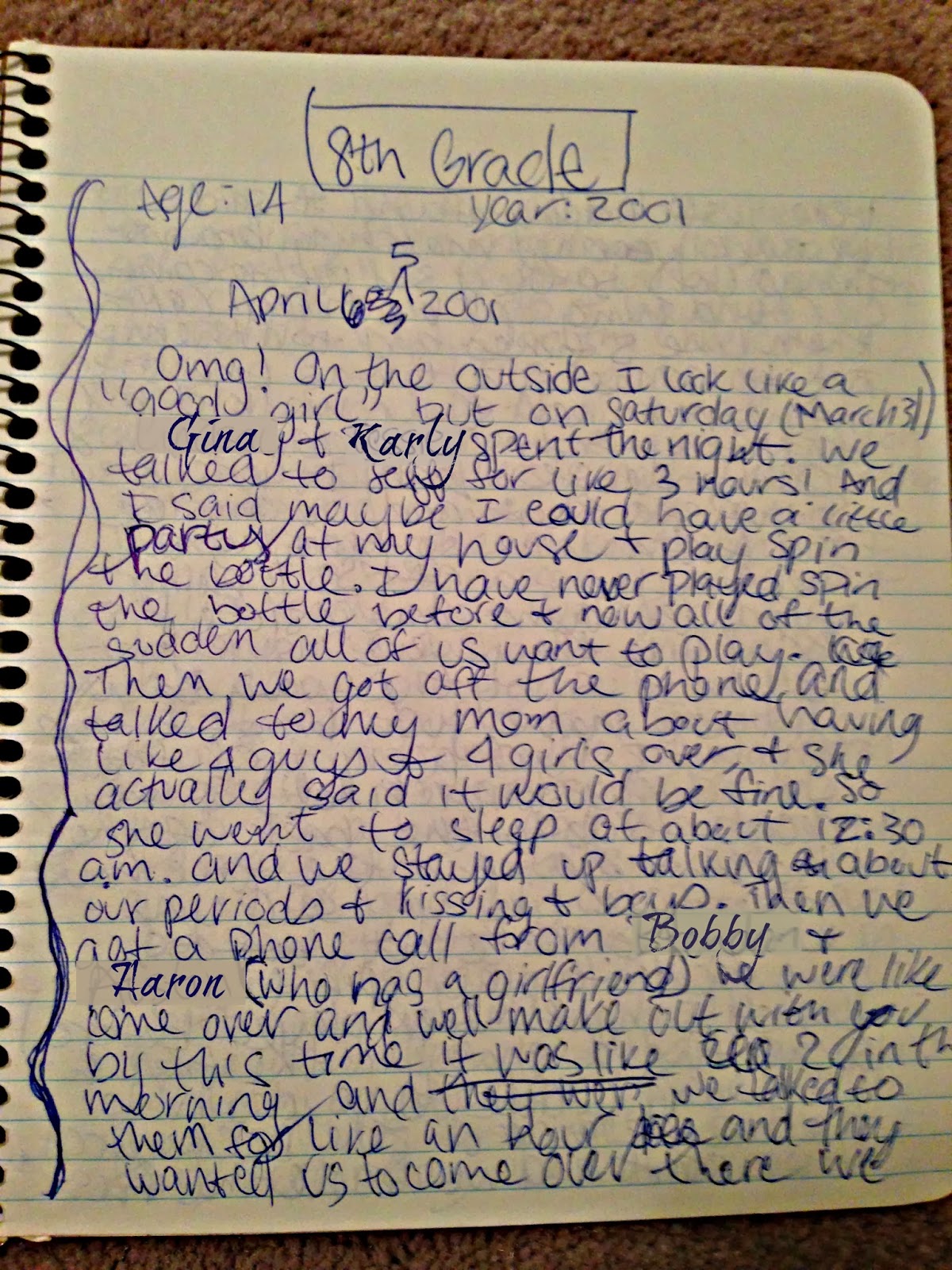 I like how I set it up with the specifics: age, year, date= and I better get today's date right! Apparently I think I'm a little risque. “On the outside I look like a “good girl” but I'm going to prove everyone wrong now! Great. My two friends Gina and Karly, were my besties. We were over at each other's houses almost every weekend. None of us = slutty. But On March 31, 2001, we went a little crazy. You see I had a big old crush on Aaron. But Aaron had a girlfriend. However his friend Bobby had a crush on me. So I knew I could lure them over. For me, in 8th grade, this was one of the craziest things I'd ever done in my life. We invited boys over at 2 in the morning. It's like I suddenly cared about boys and kissing.
They walked, from Bobby's house, in the middle of the night (probably less than a mile, but still) over to my house. I remember this night like it was yesterday. We spoke in hushed squeals as we figured out the boys arrived. So we went to the backyard to play spin the bottle. But we didn't have a bottle, so we used a plastic shovel we found in the backyard. I ended up making out with Aaron. He tried touching my butt, but like I said, I wasn't a slut, and told him “No, I don't do that.” The rest of the year we all joked about spin the shovel and our late night tryst.
I promise I was not slutty, mom.
So, what were you like in Middle school? More of a Helene or Taylor?